The 2021 MLS Cup Playoffs kick off this weekend, so naturally we get prepared by highlighting the player from each postseason club that’s most likely to turn heads with his pregame ‘fit.

It has been a heated battle to get to the 2021 MLS Cup Playoffs, capstoned by a truly wild Decision Day two weekends ago. While we could get into matchup previews, analytics, and predictions, it’d be a lot more fun to see who the most fashionable player from each team in contention to win the MLS Cup is — so that’s what we did.

If you’ve followed Urban Pitch for any amount of time, you know we like to rank kits or boots and love football fashion. But for the MLS Cup Playoffs, we thought we’d mix it up a bit and show you some everyday swag.

As MLS has grown more global, players from around the world bring their style sensibilities with them when they join a squad. But it’s not just the international players that know how to dress. These are the most stylish players on each club in the MLS Cup Playoffs.

The second-seeded Philadelphia Union know the importance of fashion and even made a line of spiffy playoff merch. They chose Kai Wagner, Sergio Santos, and Kacper Przybylko to show off the collection because they are among the most stylish on the team. But only one can hold the title of most fashionable and we have to give it to Santos. The Brazilian forward scored six goals in 26 appearances and scored several points in our book with his smart off-the-pitch looks. His clothes are tailored well, he knows how to do a pop of color, and we stan over his accessory game, which includes a Fendi scarf and his effortless ability to rock a brimmed hat.

The New York Red Bulls gave fans a thrilling season as their postseason hopes came down to the wire, but a Decision Day draw kept their 12-year playoff streak alive. Despite being in one of the most fashion-centric cities in the world, the Red Bulls don’t really flaunt their styles on social media, but perhaps what makes someone truly fashionable is not having it prove it to anybody. We’ve selected young goalie Luca Lewis as the style king of the team because of his brand awareness. He’s been spotted wearing Balenciaga, Off-White and Prada. His time in Italy on Torino FC probably gave him a further appreciation for the art form of fashion.

Being owned by the same group, and therefore having a similar look as Manchester City already gives New York City FC a leg up as an overall fashionable team. They’ve also done a super dope collab with classic New York streetwear brand Staple. French defender Maxime Chanot takes the cake as most stylish on the team because of his well-tailored suits, which feature the high-cut European fit of course. But mostly, we are obsessed with Chanot’s paperboy hat game. If it were anybody else, we’d say pace yourself because a standout piece should not be overdone, but Chanot pulls off the hat trick. In nearly every off-the-pitch Instagram post, he’s rocking the cap and he does it well.

Atlanta United have had the swag on lock for a while as they’ve been well-connected to the hip-hop community in the city, and even got Waka Flocka to do a new song called “Dreads Shakin’” just in time for the playoffs. The most fashionable player on the team also happens to be one of their most successful, Josef Martinez. The Venezuelan striker has been making history on the pitch for a few years now and his impact was felt just as much this year, especially with his colorful pink hair and a stellar goal against Cincinnati to boost the team back into the playoffs. But even though Martinez is known for his eccentric hairstyles and megawatt smile, he knows how to dress up too. He wore this all-red suit with a wide-brimmed hat for Father’s Day last year and a pink one for Mother’s Day.

Nashville is a place with a style of its own, and Nashville SC has embraced the culture of the Music City as it welcomes artists to its games frequently and weaves in guitars into its marketing. One player that stands out as extra fashionable is midfielder Hany Prince Mukhtar. The German-born player has a cool style where he knows how to rock a button-up of different styles, prints (we especially liked this poppy one), and textures, but can also be casual in a pair of RHUDE shorts in Miami.

Orlando City SC is another team who’s been aware of the fashion side of the game. They also have a playoff merch collection and have a really cool patch program. But the player who stands out as the most fashionable is Junior Urso, who has woven the fact that his last name means “bear” in Portuguese into his personal brand very nicely. He’s had some fun with bleach in his hair, but his style is effortless and cool. He shows how a single gold chain can tastefully elevate a look like this all-black one or this pink suit with skinny pants and some Nike x Patta SB Dunks. He also knows how to balance oversized shirts and tight shorts, which can go very wrong for some people, but he does it without a second thought.

The Portland Timbers’ journey to the playoffs was hugely helped by a victory over LAFC, which was won by a goal from midfielder George Fochive. The DMV native not only boosts the team morale on the pitch, but he inspires with his dapper style off of it. It’s hard to describe Fochive’s style except he’s probably just always the coolest person in the room. Perhaps the key is the details. A knit beanie and a gold watch took this summer look from fresh to flawless. He wears smaller layered necklaces and simple small hoops instead of chunky chains and diamond studs. He’s not afraid to mix prints and match when he wants to (this tie-dye shirt with a pair of Puma RS-Xs worked quite well). He’s also in the know about brands like Y-3 (adidas’ partnership with Yohji Yamamoto) and is a supporter of Portland-based African boutique N’Kossi. If you want a style guide, just go to his Instagram and you’ll get plenty of game.

This list is showcasing several footballers who like fashion, but Minnesota United FC is home to a player who turned his passion into his own company. DJ Taylor is the owner of Venci, a streetwear brand that inspires everyone to chase their dreams. The defender signed with Minnesota United in February after building his career with North Carolina FC in the USL, and besides starting six games for his new team, he revealed his first Venci hoodie in May. You can get Venci hoodies, long sleeves, hats, and beanies in neutral colors and every order comes with a free pair of socks.

Taylor’s teammates have been supportive of his endeavor and Jacori Hayes even helped announce the brand with a post of his own where they’re modeling the long sleeves. As there’s a bigger and bigger push in the sports world for financial literacy and personal ownership — and looking good while handling your business — Taylor is ahead of the game.

There are several Sporting Kansas City players that could be named most fashionable as many of them have a laid back style that they sprinkle with a touch of personality. We are going to give this title to French defender Amadou Dia who can literally do it all. He can pull off a henley shirt, a Muhammad Ali graphic tee, a polo with a Black Lives Matter mask, and rocks the bow tie pretty swell too. He’s not one to show off his collection of kicks, but we know he has a pair of Jordan XIs in his possession, and that’s enough drip right there.

In the Pacific Northwest, fashion often takes a backseat to practicality, but that doesn’t stop Vancouver Whitecaps goalie Evan Newton from serving lewks. Newton is king of the blazer game. He can do navy, he can do gray, he can do black, he can do plaid. We think it’s totally rad.

As PNW neighbors to Vancouver, the same fashion mantra goes for the Seattle Sounders. While there are some players who are a bit more daring with their style choices (see Nicolas Benezet in this ensemble featuring plaid pants and a Star Trek-looking zipped jacket), we give the crown of most fashionable player to Jordan Morris, who is the definition of effortlessly cool. The forward knows that neutral tones are in and looks great in different grey sweatsuit pieces and lots of Nike. He also knows how to have that perfect pop of color and is a master at the art of layering.

Salt Lake City is yet another locale that’s not exactly known for its fashion, but the team knows sport style quite well. While most of the team has mastered the art of layering, midfielder Albert Rusnák holds the crown for fashion sense. The Slovak player wears t-shirts from haute couture brands like Vetements paired with pants and loafers for a pretty slick look. This summer fit featuring a hoodie from streetwear brand Burkli paired with jean shorts and high-top Prada sneakers was a game-winner.

As you’ve probably noticed reading this list, Brazilians are known to dress smartly and Andre Shinyashiki leads the very successful top-seeded Colorado Rapids with his clean looks. The forward expertly pairs muted basics to show that fashion doesn’t have to be flashy. One of our favorite looks was this printed Comme des Garçons jacket with an effortless pair of skinny jeans and a signature Gucci bag. The team did a social media competition to see who the best-dressed player was, and Shinyashiki led with four submissions in the bracket. He made it to the Elite Eight where he was beaten out by eventual champion Keegan Rosenberry, but he has the trophy in our minds.

The New England Revolution took over this season with a league-record 73 points. Andrew Farrell leads the team with 33 appearances this season and 2,970 minutes played, but he also tops their fashion game. The defender can really do it all. He shows up to games in smartly tailored suits, including this blue one he donned recently with a tasteful pocket square. Or he looks fly in a graphic tee and some kicks from his extensive collection. Farrell has several Nike Dunks, Air Jordans and even a pair of Pharrell’s NMD Human Race shoes, all of which have some eye-popping price tags on the resale market. As the dominant team seeks to rebrand after this season, maybe they could enlist Farrell as official fashion consultant.

BONUS: Revs goalie Brad Knighton has his own sense of easy style. He had a winning look heading into a recent game when he donned a throwback Paul Mariner England kit. 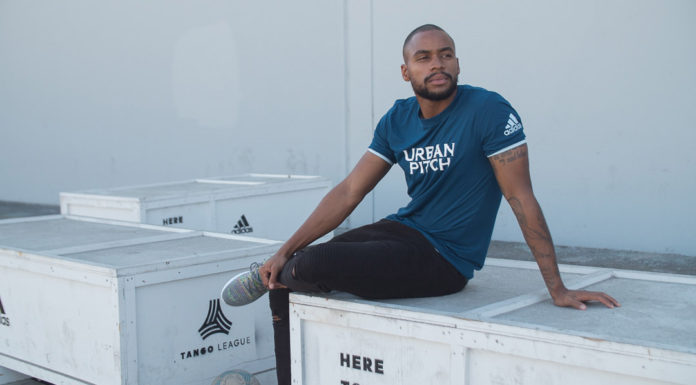