Adidas is having a moment, and it may be one of its most impressive yet within its long history as once-reigning king of global soccer. It is true Adidas has been challenged with stiff competition (read: Nike, read: Under Armour) when faced with the changing tide of Millenial preference and the indecipherable mass of digital tastemakers. But while an iconic institution might have simply rested on its laurels, Adidas seems to be embracing the spirit of out-of-the-boxness, perhaps more than any other sports brand today.

Indeed, the 3-stripes brand has garnered the reputation of being the nimble, scrappy kind of company that is willing to take creative risks, and whose culture is attracting the cool kids when it comes to design and celebrity collaborations. The bet seems to be paying off. Adidas is looking up on the Wall Street front and in its latest effort, it transformed an airport hangar in Santa Monica, CA, into a futuristic, 3-day “incubator” dubbed The Mercury Center. Which is to say, they got a bunch of really talented, creative people together from wide-ranging fields in tech, art, and design, and let the magic synergy spark.

Soccer is very similar to basketball in that at its core essence, it’s about improvisation, creativity, and style.

In its effort to be a leader in said wide-ranging fields, Adidas selected a small group of creatives to set up shop in The Mercury Center, and asked them to use the Mercury Pack line (Ace/X/Messi) and the Adidas motto, “First Never Follows,” as their muse. “Soccer is very similar to basketball in that at its core essence, it’s about improvisation, creativity, and style. Street basketball and the pickup game is what really has built many of this country’s greatest basketball players, and that’s the case around the world with soccer as well,” said Fox Sports writer Aaron West, who was one of the select folks present at Adidas’ creative convergence. “Freestyle, street soccer, and the small-sided game are where players can really find their creative voice.”

I think there are a lot of great freestylers and street ballers, too many to name, that are helping to drive the culture and movement.

Importantly, Adidas also hosted a round table of leaders in the field—Sam Handy, Adidas VP of Design, Zola Short, Adidas Director of Soccer Sports Marketing, Ben Hooper, Founder of Bumpy Pitch/Original Winger, Aaron West, Fox Sports Writer, Luis Orellena of Niky’s Sports, Andrade Guillermo, FourTwoFour on Fairfax, and our very own John Lee of Urban House L.A. The group discussed the future of football in L.A. and where style and design is headed in footwear and beyond. “I think street football and freestyle is helping a broader audience get interested in the game of soccer through different channels other than the traditional avenues such as watching games on TV,” Lee said. “For younger players in particular, I think it’s a great way to develop their touch and skill to help get to the next level beyond what practices can provide. I think there are a lot of great freestylers and street ballers, too many to name, that are helping to drive the culture and movement.”

Adidas’ experimental space also included the industrial design of Coupler MFG Reimagining who installed unique targets for ballers to practice with, a giant interactive video screen, and Odd Division’s Virtual Reality creations with the miCoach Smart Ball, which formed 3-D architectural designs based on how players kicked the ball. Adidas had A$AP Ferg also drop by who wore his customer jersey later that night for a live performance, and ended the incubator with a viewing party of Copa America’s USA v. Columbia opener. By packing in an incredible assortment of talent into what was once an airport hangar, Adidas continues to foster creativity from all different fields, and has certainly planted seeds for future collaborations. With its willingness to work with key innovators and a faith in the artistic process, it certainly looks like Adidas is kicking creative butt in the ever-expanding field of football. 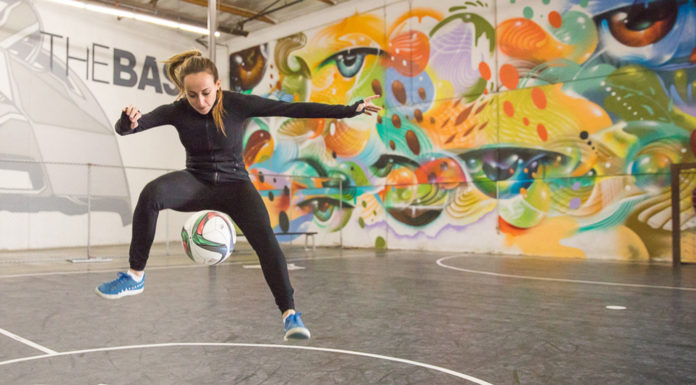