Over 100 soccer teams descended upon Las Vegas this past week for a 5v5 tournament that offered cash prizes and an all-expense paid trip to Bangkok, Thailand. The amateur event produced by World Soccer 5s USA was open to male and female players currently not signed to a professional contract. A few of us from Urban Pitch took the opportunity to take a “quick” road trip to Sin City while sponsoring an L.A. contingency comprised mostly of the Brazuca Ballers.

The tournament was something akin to the wild west. Top street teams traveled from all over the U.S. to compete in unpredictable conditions and unorthodox tournament regulations, making every game a chaotic, frenzied contest. Tournament organizers had installed artificial turf on a huge concrete lot, outdoors, in the midst of gusty desert conditions. Rather than using appropriate futsal balls they used regular soccer balls, which created high bounces and difficult, erratic play. For the street ballers used to tight passes and precise ground moves, these were crazy conditions. The teams weren’t able to play their short-sided game, nor were they able to utilize long shots and passes associated with 11-a-side soccer. The unusual hybrid format was a sort of worst of both worlds.

The stiff competition was alternately rewarded and punished for physical play due to a wide range of refereeing (it’s always the ref’s fault). The result was more than a few questionable cards, including a red for the Urban Pitch team. Windy weather in the Las Vegas desert also added to the high drama with overturned goal posts, game stoppages, and runaway hats.

After four long days of partying, er playing, NY Ecuador FC defeated the RSV Devils from Texas in PKs after a 2-2 draw in the Men’s division. The Urban Pitch sponsored Brazuca Ballers crew finished with 3 wins and 2 losses, eventually bowing out in a 5-2 defeat while playing a man down. The Cinco 7 of Florida clinched the top spot in the Women’s division by going undefeated 5-0 throughout the tournament. 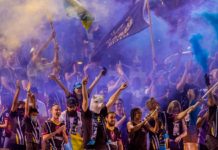 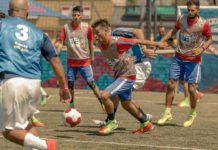 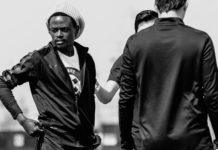 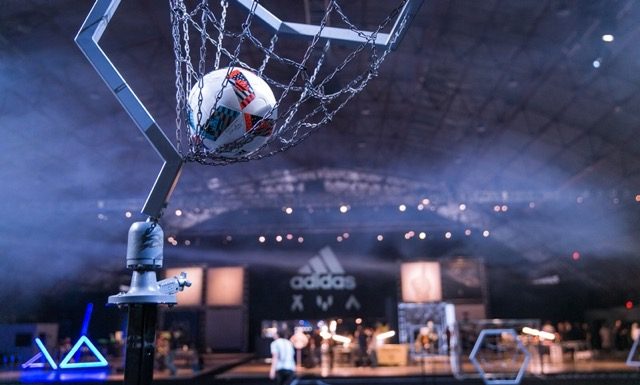