Few teams have looked as good as AS Roma over the past six years. Nike has had a lot to do with this. Unfortunately, the power couple will be splitting after the 2020-21 season, so we take a look back at the best that has come from this delightful partnership.

AS Roma and Nike have officially parted ways after a fruitful relationship that has seen the Giallorossi don some of the most iconic kits in the game. Roma’s season is still very much underway as they face Sevilla in the Europa League Round of 16, but next year’s home and away kit have already sent shockwaves throughout the soccerverse. Nike has carried certain themes throughout their tenure such as the legendary she-wolf, historic architecture, and modern takes on fashionable throwbacks. The following list is the top 10 Nike x AS Roma jerseys to come out from their commercial and technical partnership. 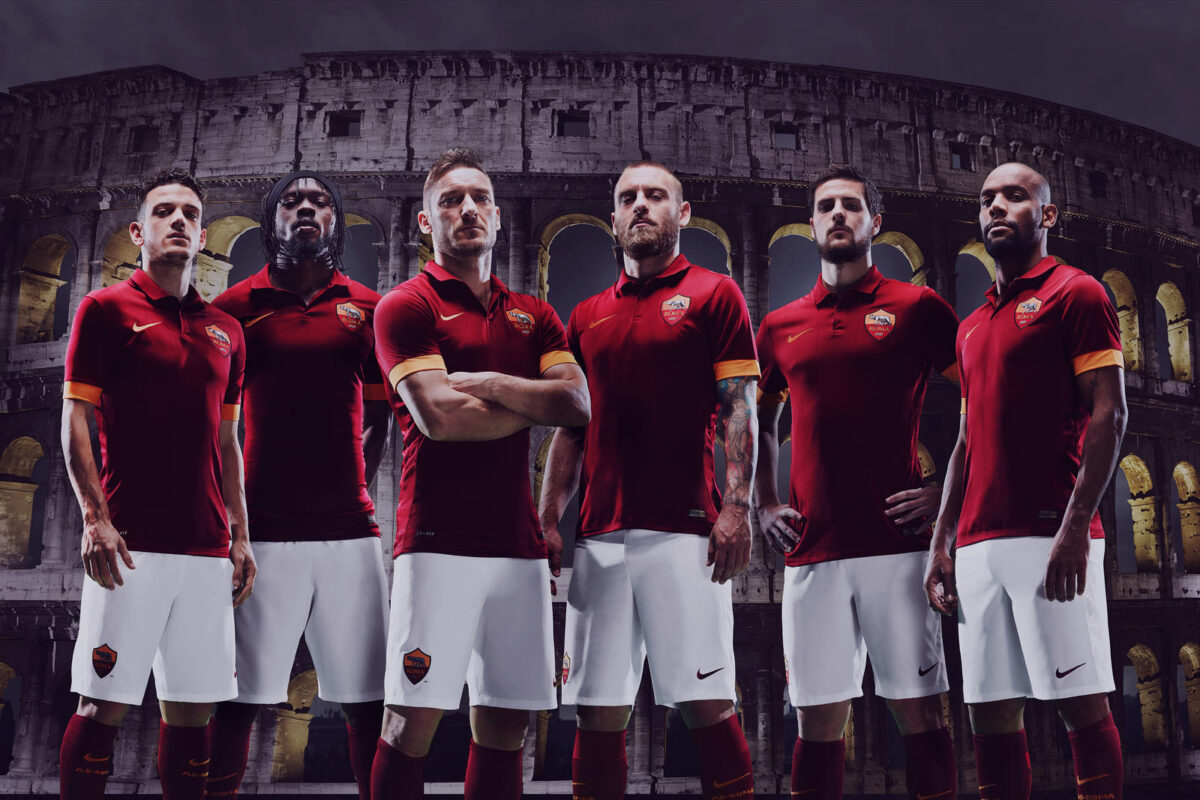 The very first time Nike and Roma linked up was one of the best. By mid-decade, the club was becoming a midfield force with Daniele De Rossi vice-captaining alongside Radja Nainggolan and Kevin Strootman. While the offense struggled to take full flight with Totti’s 10 goals as the season leader, the defense was solidified by the legendary Maicon, experienced Federico Balzaretti and the late Davide Astori, as well as young center-back Kostas Manolas.

Professionalism and a serious tactical approach saw Rudi Garcia’s men finish in second place, and the year’s kits mirrored his philosophies. They were a simplified, all-business maroon with a formal collar. There was a surprise party in the back though, as popping the collar up revealed the yellow text “La Roma Non Si Discute Si Ama.” Perhaps one should have expected a surprise, alluded by the vibrant cuffs. This kit deserves its place for its traditional take and handsome appearance. 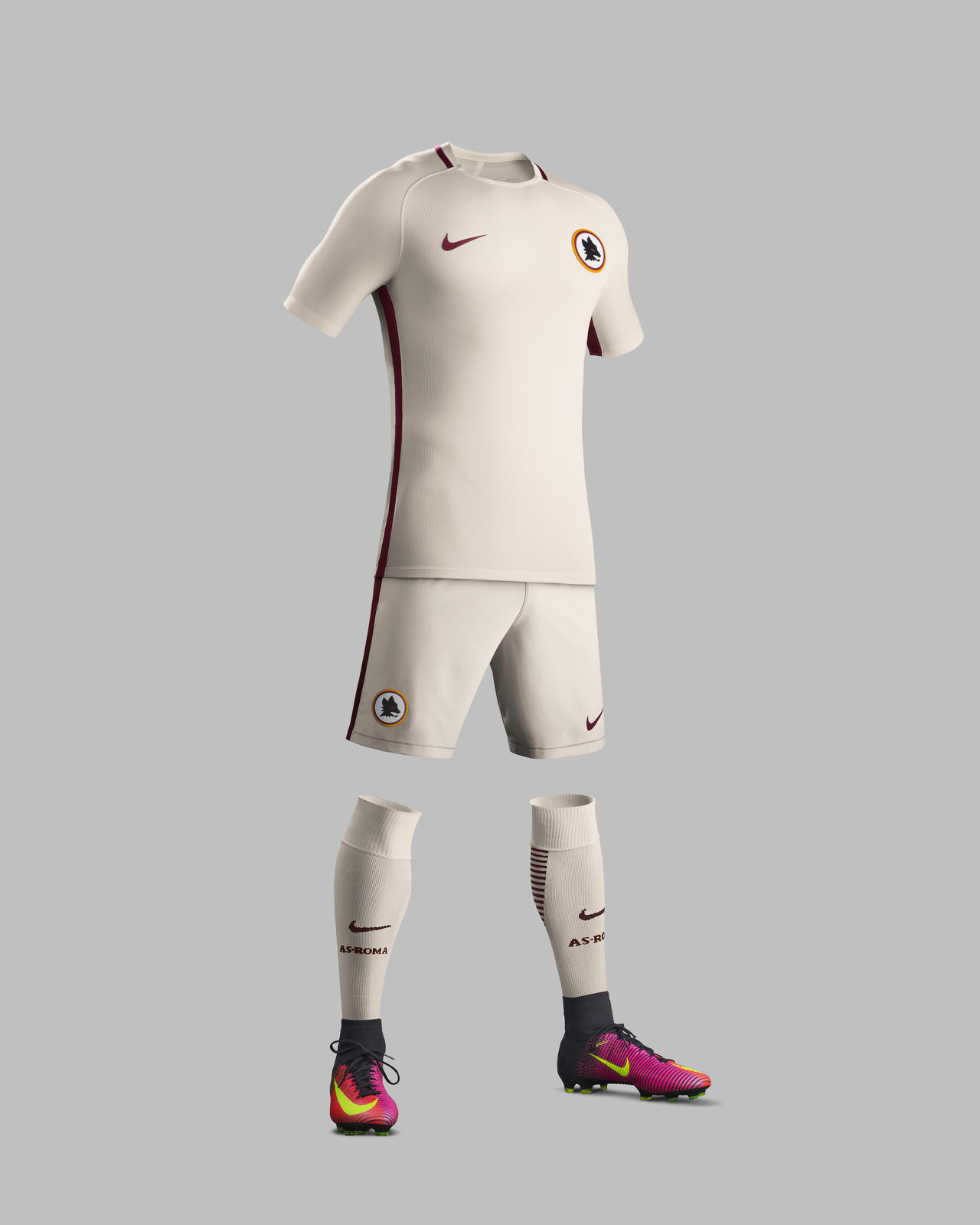 Roma’s 2016-17 season was bittersweet, remembered by most as the legendary captain’s final season. But Francesco Totti must have been proud as he helped lead his side to the club record points total. Edin Dzeko looked dapper in the white away kit as he won the Capocannoniere award, donning the famous Lupetto crest.

The marble white shone like the grandeur of an Ancient Roman column for the club’s 90th anniversary. Its crewneck collar, maroon trim, and absence of sponsor exemplified the modern trend of elegance over attention. 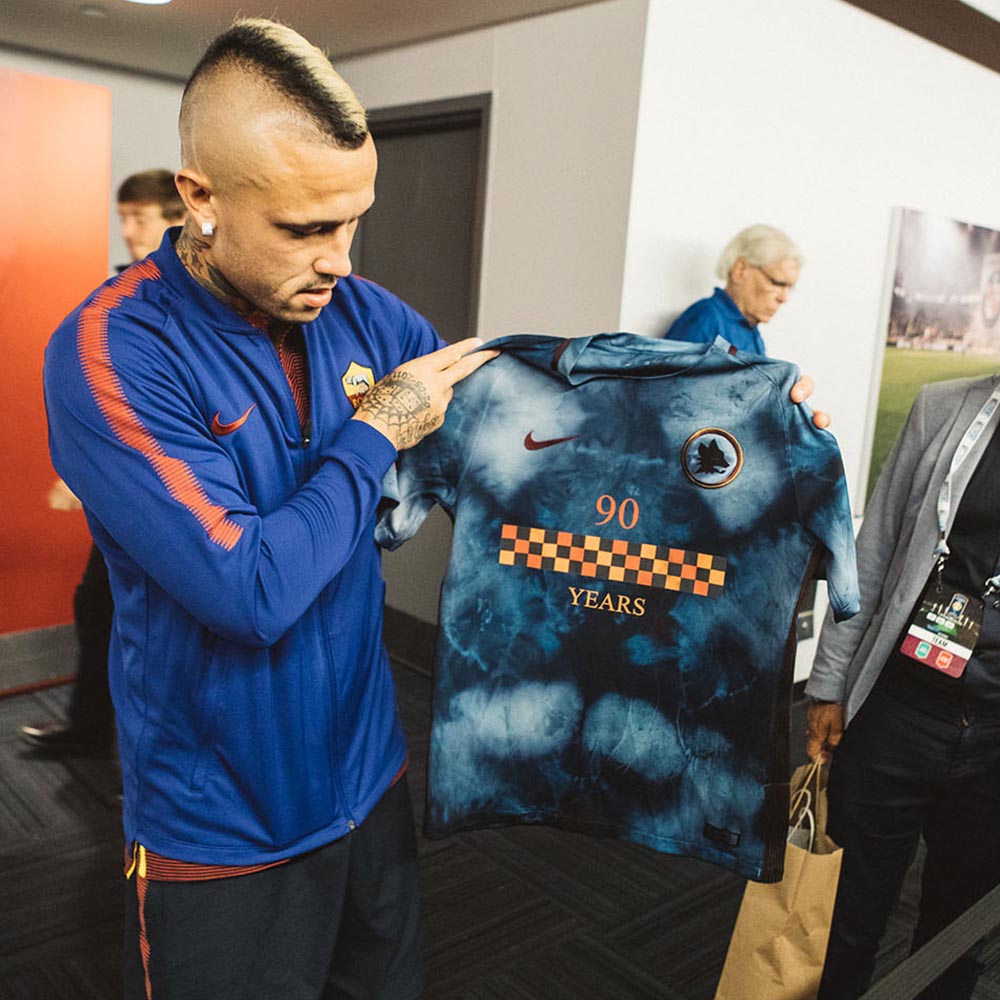 Soccer culturalists Nowhere FC teamed up with Roma in the summer of 2017 to deliver a product unforeseen by the soccer world. Nowhere FC’s “Tour Mondiale” project coincided with Roma’s international tour, staging a mini collection of shirts, scarves, and memorabilia ahead of the Giallorossi’s match against Tottenham at Red Bull Arena. It has become a niche favorite where soccer meets urban culture, and has led to more lifestyle-club collabs like Air Jordan x PSG and Palace x Juventus. 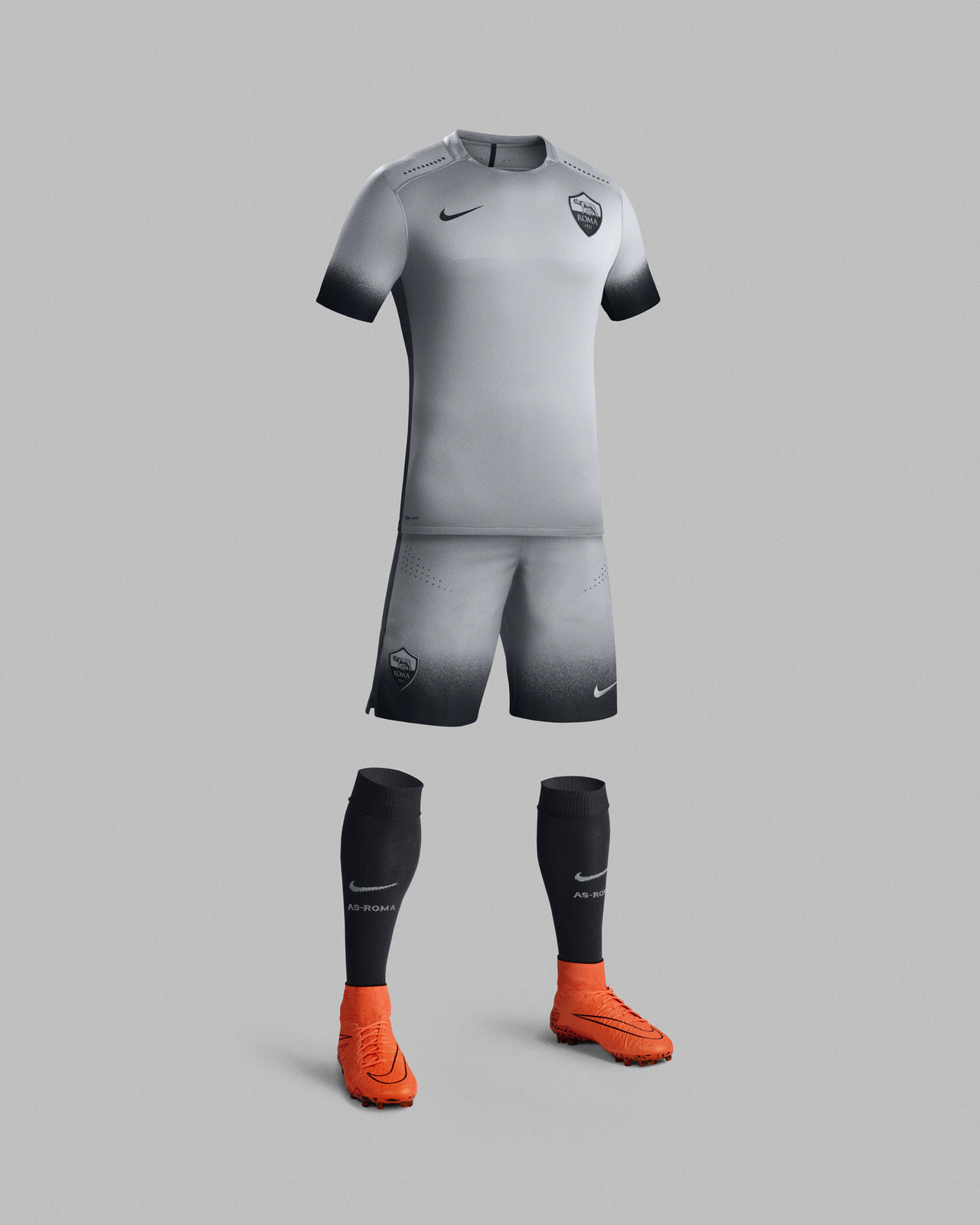 No city has deeper folklore than Rome, and the story of its creation is what inspires this special edition. The “Lupa” rescued Mars’ twin sons Romulus and Remus from drowning in the Tiber river, and this kit takes on her distinct Apennine appearance.

The steely grey transitions to black, in a kit that truly exemplifies the animal’s cunning strength. According to Nike, the ombre graphic accentuates the players’ physical presence under the floodlights. Even the crest was put into greyscale.

The kit was also part of Nike’s eco-friendly initiative, using about 18 plastic bottles for the product’s polyester. 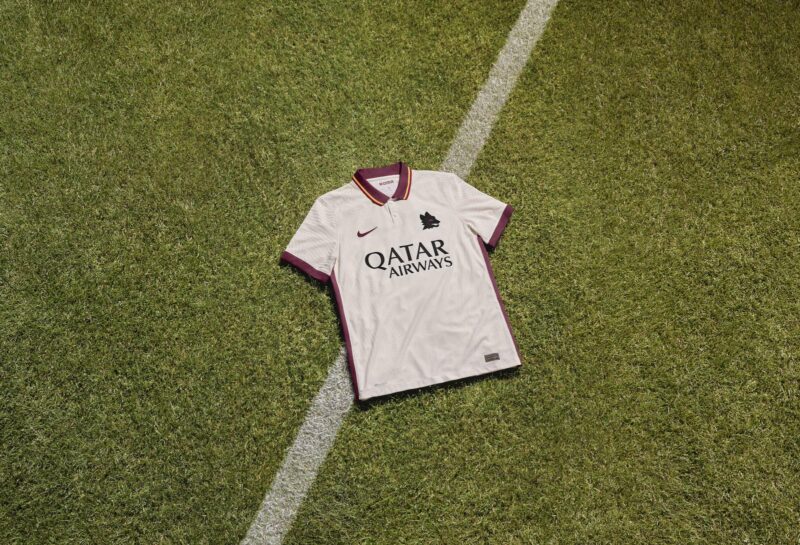 Feel free to pop that collar and embrace the iconic Lupetto crest in Roma’s final Nike away kit for next season. Playing on a kit from the 1980’s with an ivory tone inspired by the city’s monuments, we can best describe this kit’s style as “vintage-chic.” Yellow accents divide the collar’s contrasting reds, and the chest is given a classy two-button closure.

A clean look by the naked eye, a closer look reveals an array of textures and detail. Nike’s dri-fit material is of the latest generation, and the numbering is etched with a technique reminiscent of ancient sculpture. It’s a hit that’s been made into an instant classic by adding the Lupetto as a badge of honor. 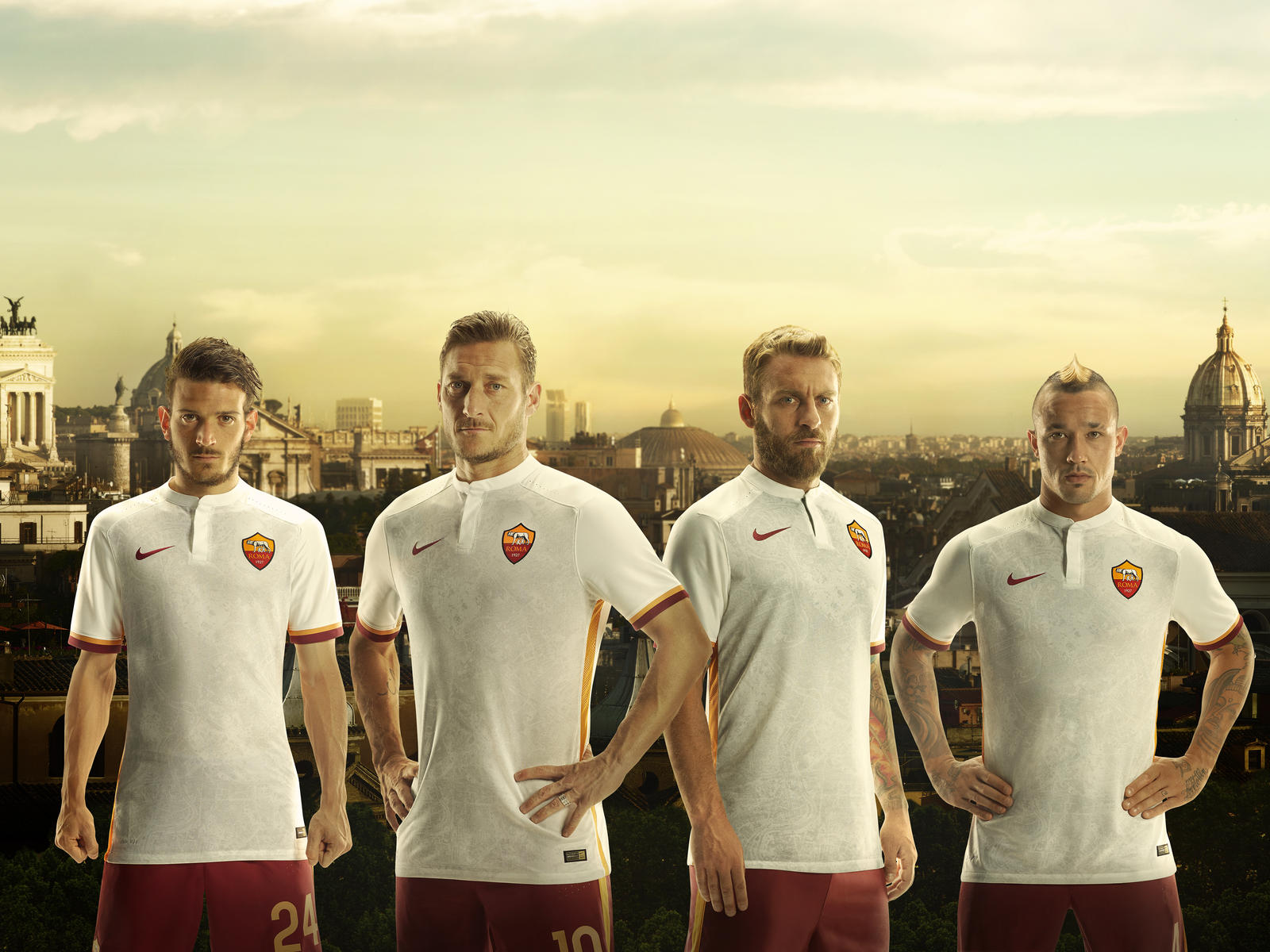 A year of transition. Rudi Garcia’s tactics seemed to have been found out by the rest of the league, and his ace in the hole, Gervinho, made a winter transfer to China. The return of Luciano Spalletti was a breath of fresh air into the stagnation surrounding the city, met nicely by a kit that had its map embedded into it.

The piping down the side of the kit ran into the shorts, creating a beautiful aesthetic with the red and yellow ribboning cuffs. Capturing the labyrinth of Rome’s vicoli, the alleyways can be seen connecting to the city’s architectural masterpieces, making a kit purely dedicated to connecting the club to its citizens. No treading on SPQR here. 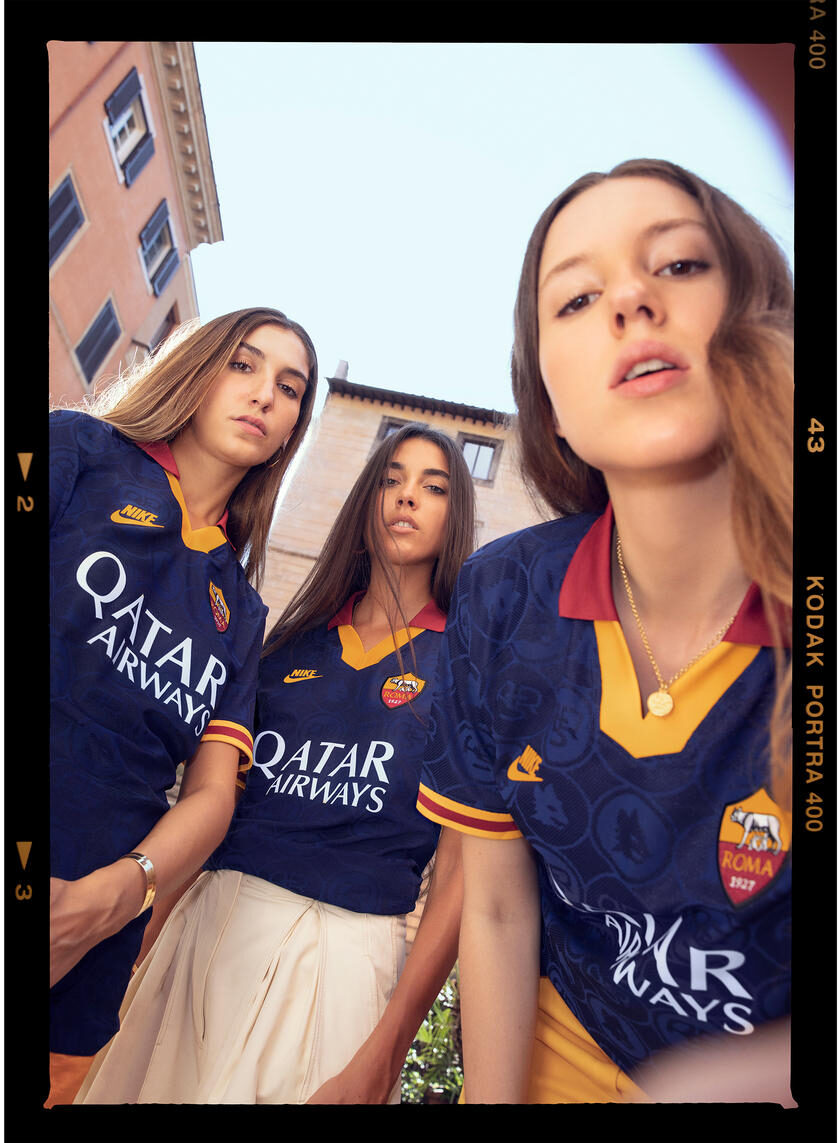 Think Biggie rapping on the corner of Brooklyn’s Fulton Street and Gates Avenue. A Ferrari Testarossa on Miami’s Ocean Drive. The Fresh Prince of Bel-Air throwing his feet up in Los Angeles. This past season’s third kit embraces the swag of the 1990s.

A throwback to 1992 when Roma played against Monaco in the European Cup Winners’ Cup, a further look reveals the shirt in jacquard with medallions capturing the club’s acronym and Lupetto symbol. The bold blue against the club’s traditional red and yellow in the collar make for a chiaroscuro effect that Bernini would be proud of.

As part of the club’s city-wide outreach during the pandemic, the kit went with a one-of-a-kind bespoke basketball hoop that was auctioned off to raise funds for the Lazzaro Spallanzani hospital. 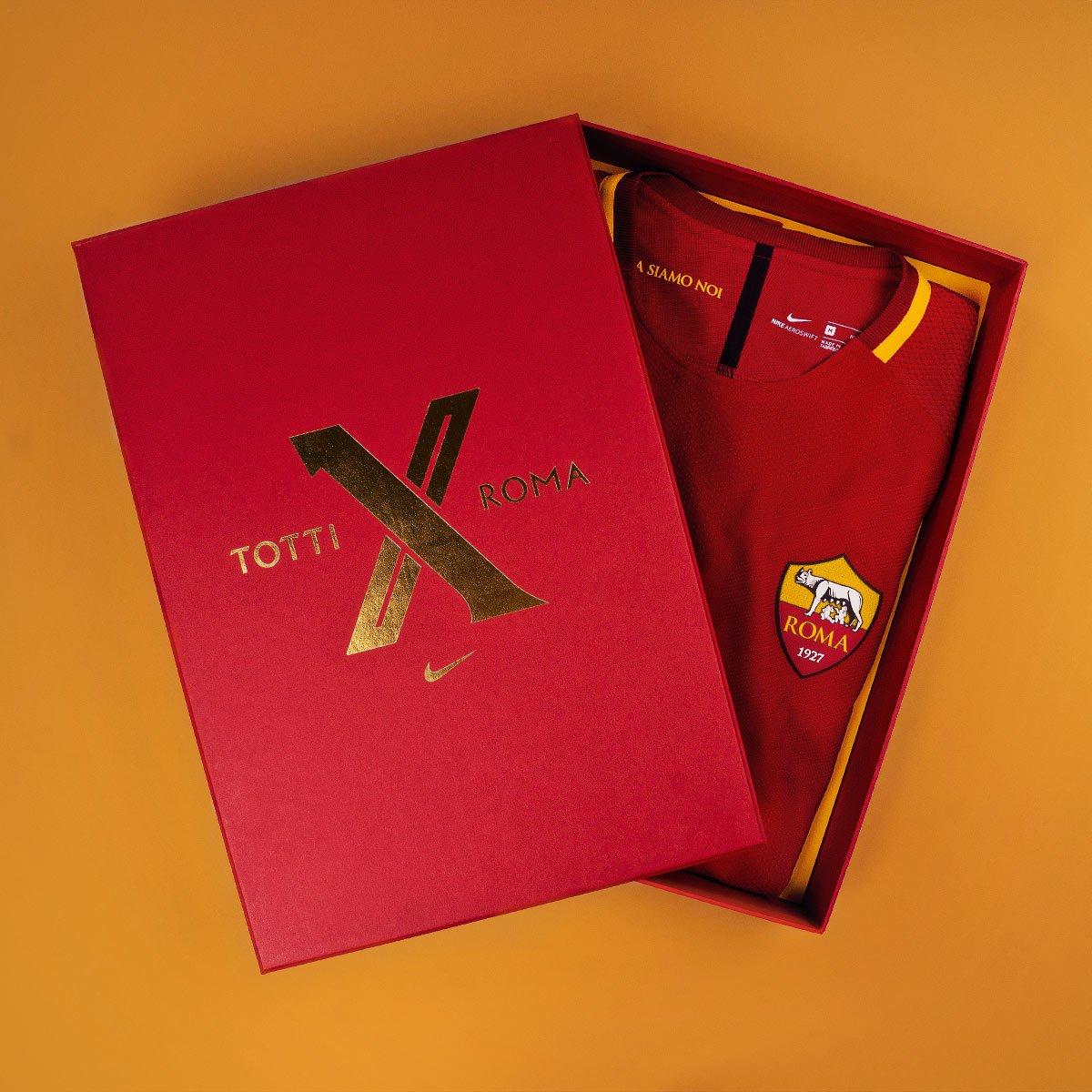 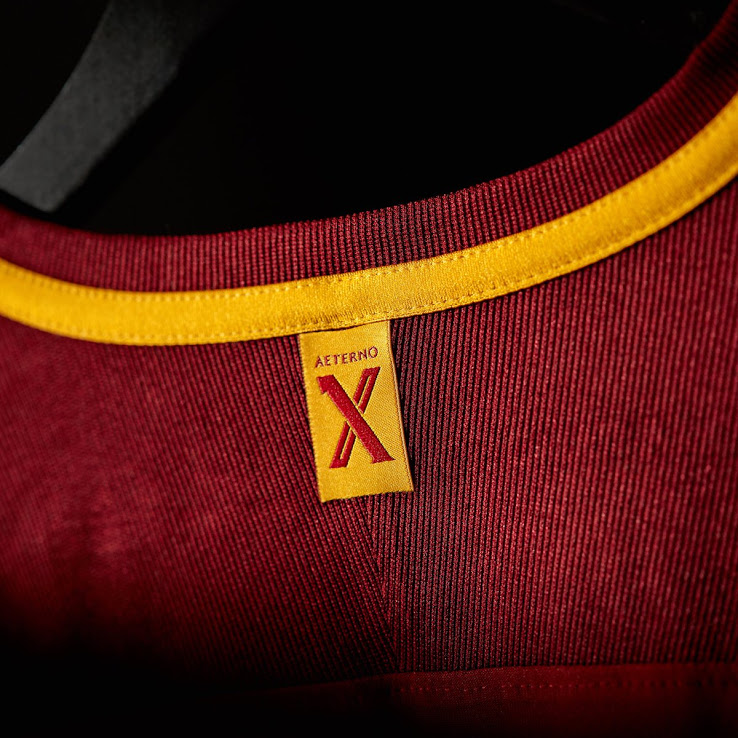 Diamonds last forever — so does the legacy that Il Capitano leaves behind. Nike distributed only 100 of these elegant kits, and it must be said that they pair very nicely with the Tiempo X Totti Roma golden boots.

They were released on the 25th anniversary of Totti’s club debut, arriving to the lucky owner in a gold encrusted box. Individually numbered on the side, the back collar reads “Aeterno X.” Simple, yet so thoughtfully constructed — just like one of his back heels. 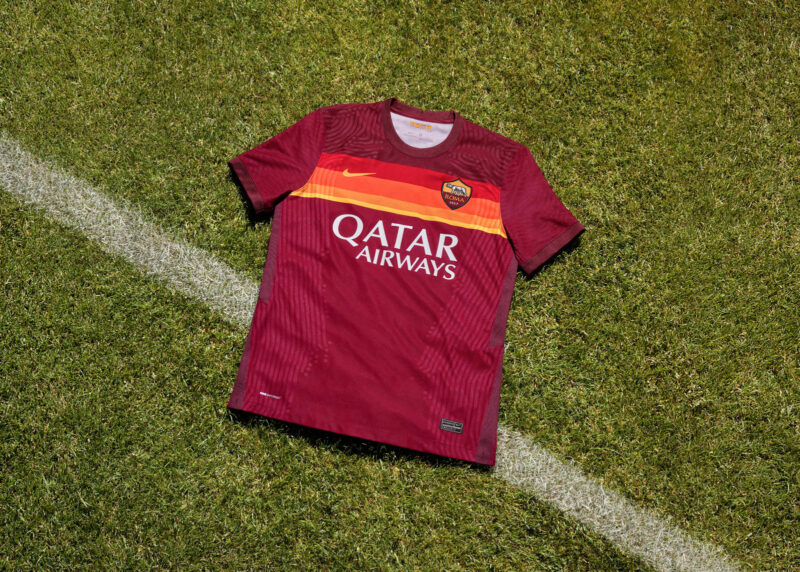 This past year we lost the creator of the Lupetto, Piero Gratton. This kit pays homage to his “Ghiacciolo” (ice lolly) kit that became ubiquitous in the minds of Roma fans during the late ’70s and early ’80s. An array of red, orange, and yellow shine brightly across the chest, mingling together how the members of Fleetwood Mac only wish they could.

Donned by club legends Roberto Pruzzo, Bruno Conti, Falcao, and Agostino Di Bartolomei, the design brings fans back to the 1980-81 Coppa Italia success, which created the platform for one of Roma’s most successful eras. It has even become nostalgic for younger fans as the most coveted vintage design. 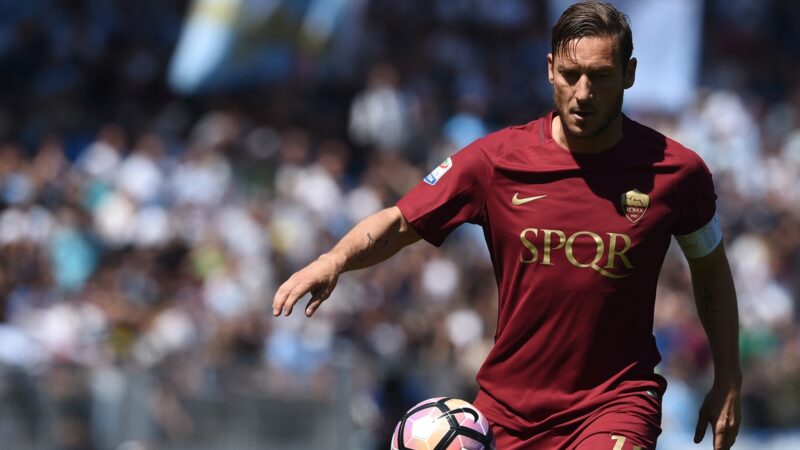 The first special edition for the Derby della Capitale, the breathtaking kit coincided with the club’s 90th anniversary. It should be remembered for its intrepid looks and symbolism, as much as the two matches it represented.

It proved to be a lucky charm as Roma won 2-0 in the first leg, thanks to a goal by Strootman and rocket from Nainggolan. For the second leg, the club moved the world’s most famous city slogan, SPQR — Senātus Populusque Rōmānu (The Roman Senate and People) — front and center across the chest.

It is most recognized for its metallic gold lettering and deep red tone. According to Roma’s press release, it “evokes the red tunics and bronze armour and helmets the Roman legions wore when they fought to defend the city.” It has since become the envy of many kit collectors. This kit takes top honors as the perfect blend of the city’s mythology, history, architecture, and supremacy.

All of these Nike and AS Roma kits are great in their own way, and obviously worthy of collecting. I highly suggest grabbing the ice lolly kit while it’s still available directly. The only piece of equipment I ever regret not buying is Totti’s Tiempos, and I tell you it still stings to this day.

An earlier version of this article had an incorrect edition of the “Totti X Aeterno” jersey. Urban Pitch regrets the error. 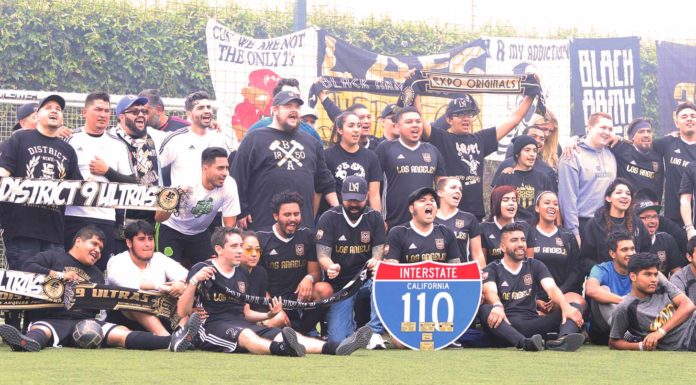