So you’re a soccer player, or a footballer (depending on the country of origin), and been raised on a healthy diet of drills tailored for the full field—passing, trapping, shooting, plyometrics—all the fundamentals to help you excel in 11-a-side. Maybe you’ve got a few choice ground moves up the Nike knickers—a step-over here, a flick there—and all in all, your skills are pretty on point. Hell, you’ve even pulled off a bicycle kick a few times. Epic.

And then you get a taste of something called FREESTYLE, and realize …

Watching professional freestyle is like seeing Dave Grohl spaz out on a drumset, or witnessing Greg Merson employ next-level game theory, hearing Tig Notaro deliver a comedy set unlike any other. It’s a display of hard-fought skill synced with natural-born artistry, in search of that effortless, transcendent moment all athletes long for.

For that reason, we’ve put together a list of some basic freestyle terms for the freestyle beginner. Just remember, Rome wasn’t built in a day. But don’t blame us if you get hooked, either!

BLOCKING definition: trapping the ball between the knees or the feet

This tutorial does a great job breaking down a freestyle fundamental. AND you know it’s legit when the host’s backdrop is a door jamb.

UPPERS definition: tricks performed literally on the upper half of the body

Believe it or not, these guys are not high, although they are definitely on one as they go buck wild with these 360 combos. Uppers usually employ the neck and shoulders and are often a combination of various stalls (see definition below).

LOWERS definition: tricks performed on the lower half of the body

ATW’s, HTW’s, HATW’s, these will all make sense shortly. The important thing to remember is that they will all take hours and hours of practice to master.

THE SLAP definition: a behind-the-leg roll-up and flick

The slap brings the ball behind the leg, then rolls down and quickly up the calf to flick the ball to the front. Make sense? As a bonus obstacle, we decided to give you the French version of the tutorial. Alright, alright, here’s an English version if you must.

STALLS definition: bringing the ball to a standstill on a particular body part

There are many variations of the stall, including the sole stall, the heel stall, the side head stall—and it’s absolutely one of the main building blocks to every freestyler’s repertoire.

SITDOWNS definition: tricks performed while seated on the ground

We know this is a semi-cruel video to call it “Beginner Challenges,” but it’s a good slice of the many sitdown combos freestylers use on a regular basis.

Got a definition to add to the freestyle lexicon? Comment below or hit us up on Facebook! 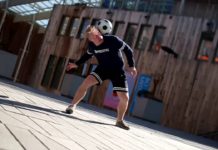 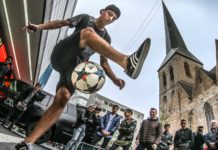 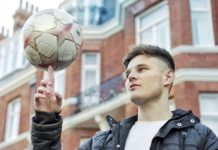 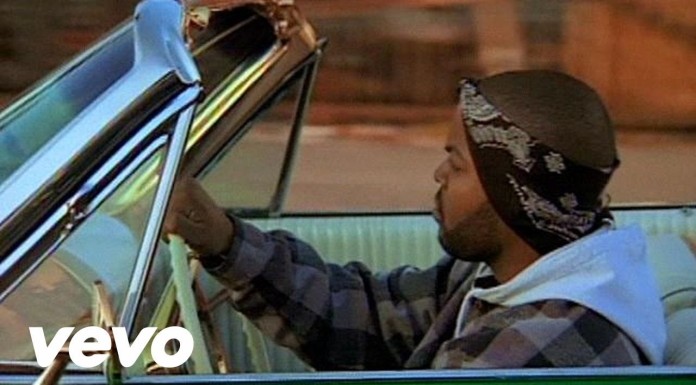 In Cali, It’s Always a Good Day to Ball