While it may not be as popular as baseball, the beautiful game thrives in Japan — especially in its street form. Home to some of the world’s top street ballers and freestylers, we see how the local youth enjoy the game at the Captain Tsubasa Stadium in Osaka.

Known as one of the food capitals of the world, Osaka also has deep roots with the beautiful game. Home to two clubs in the J. League — Gamba Osaka and Cereza Osaka — it has hosted both domestic and international stars including Yasuhito Endo, Shinji Kagawa, and Diego Forlan.

We know Japan to be one of the top freestyle and street football countries in the world, having produced the wildly creative Yo Katsuyama, Kazane, and child prodigy Shiou. While many of the top ballers reside in the country’s capital of Tokyo, we’d be remiss to overlook Osaka. Visit the Captain Tsubasa Stadium and you’ll see why. 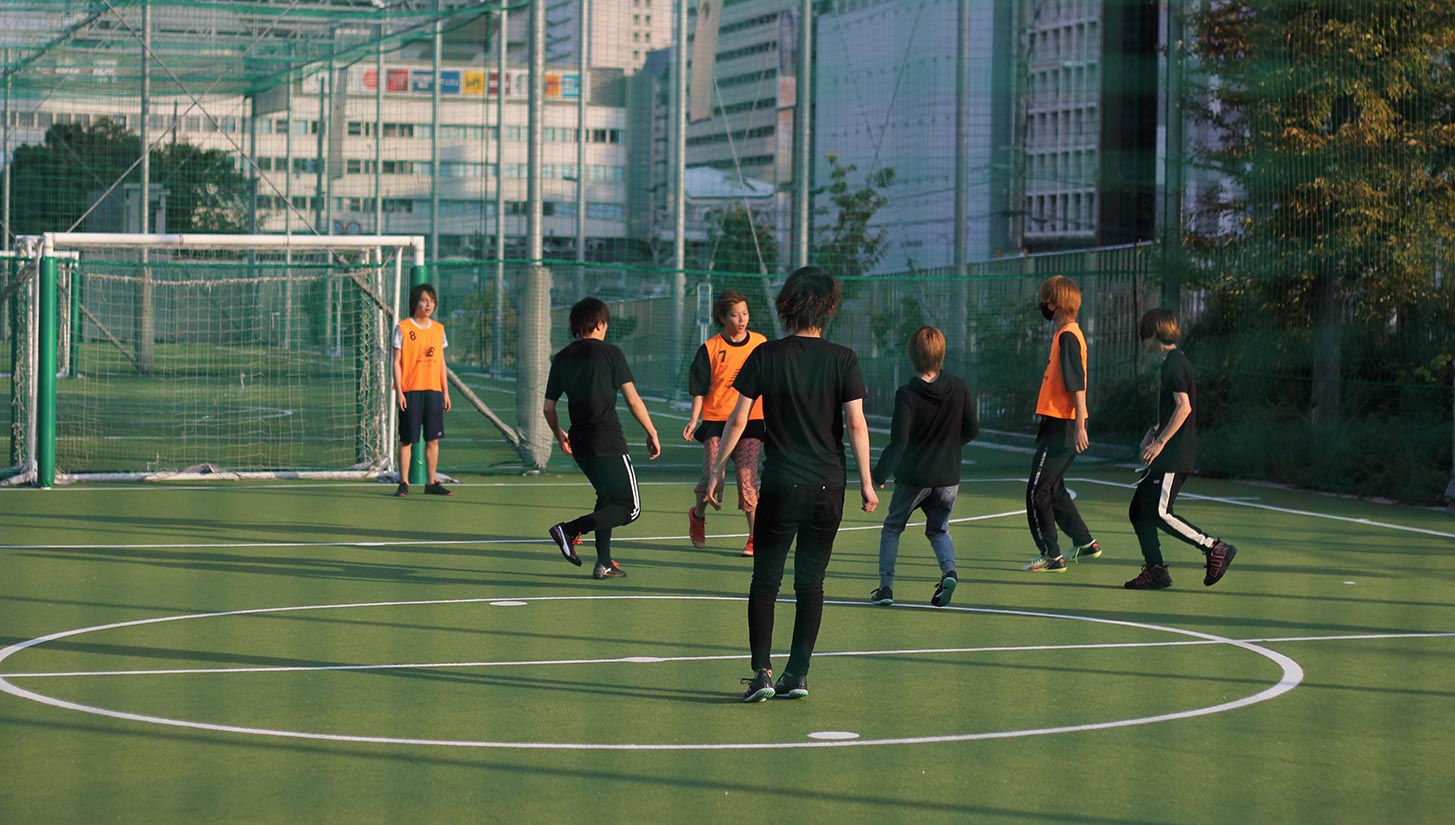 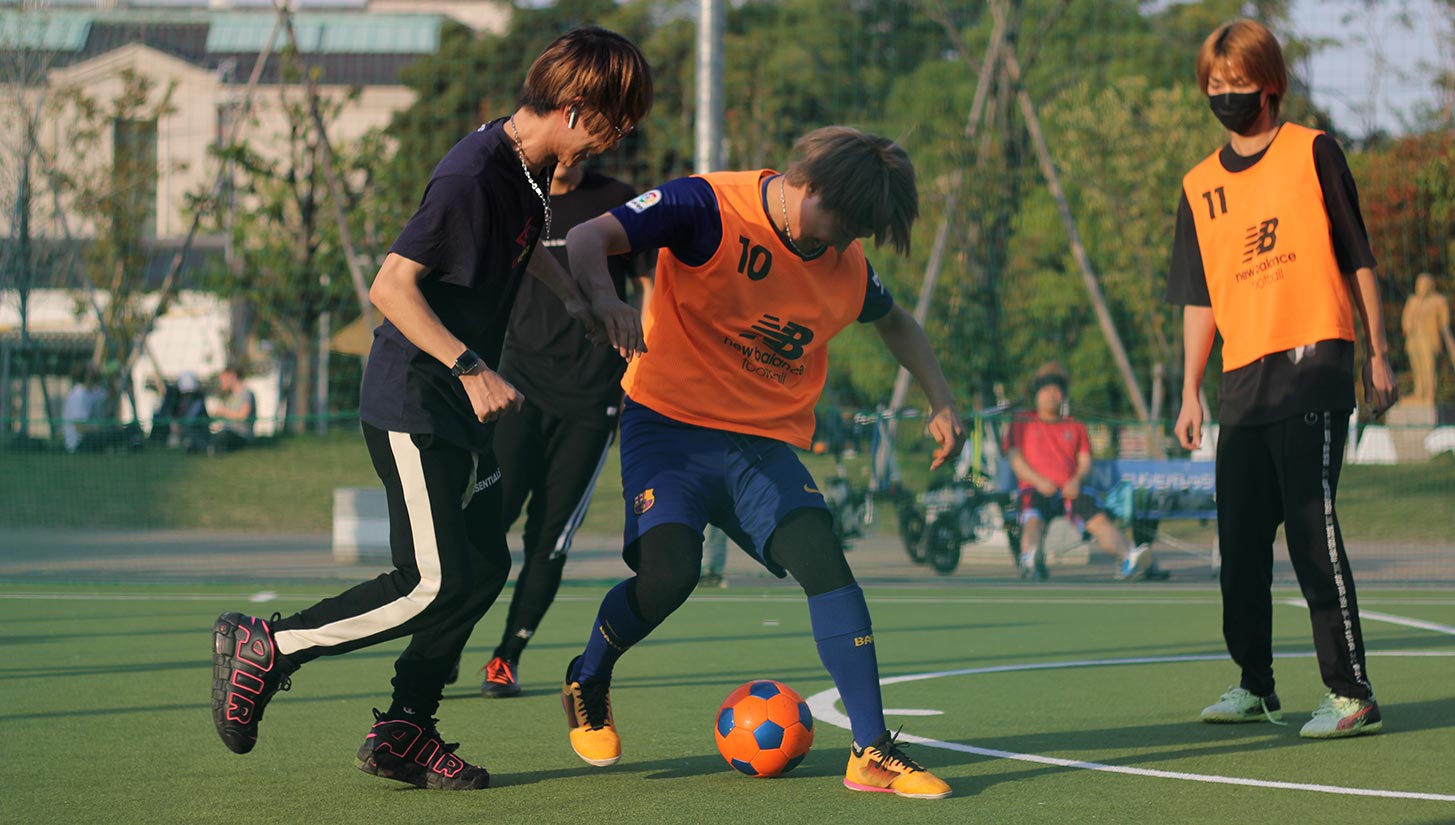 Tucked into the corner of the beautiful Tennoji Park, the trio of AstroTurf fields are named after a popular manga and anime whose main character, Tsubasa Oozora, is known for his incredibly acrobatic football skills. The players on the pitch when I arrived on a sunny Friday afternoon may not have had the same moves as Tsubasa, but they were definitely talented.

Caged in on four sides, a throng of about 30 gathered to hop into the rotation of pickup games, and a few dozen more stopped by to watch the kids enjoy an afternoon of laughter and friendly competition. It was obvious that the cage was a regular weekend hangout as high schoolers poured in eager to play right after school was out for the week. 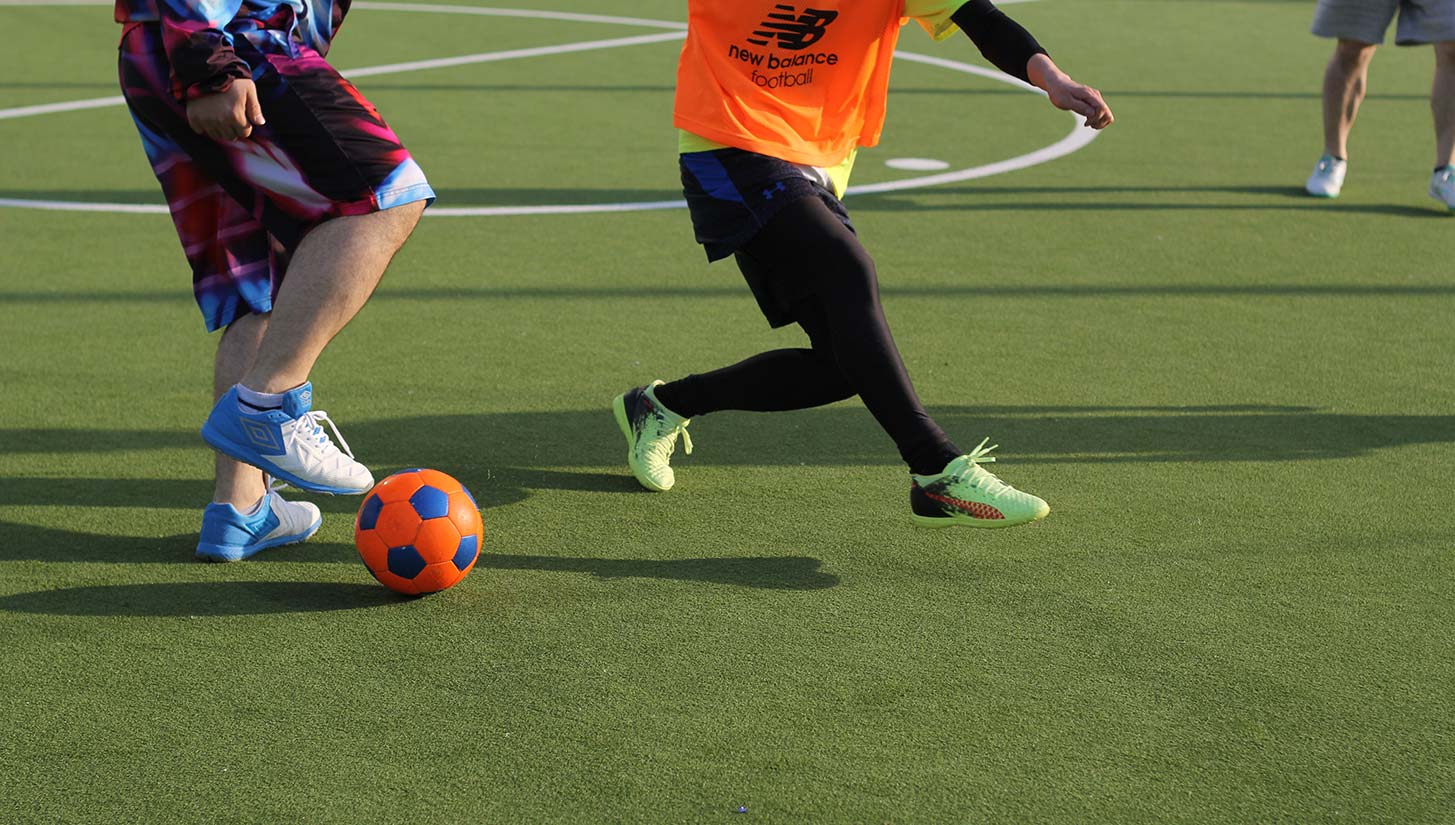 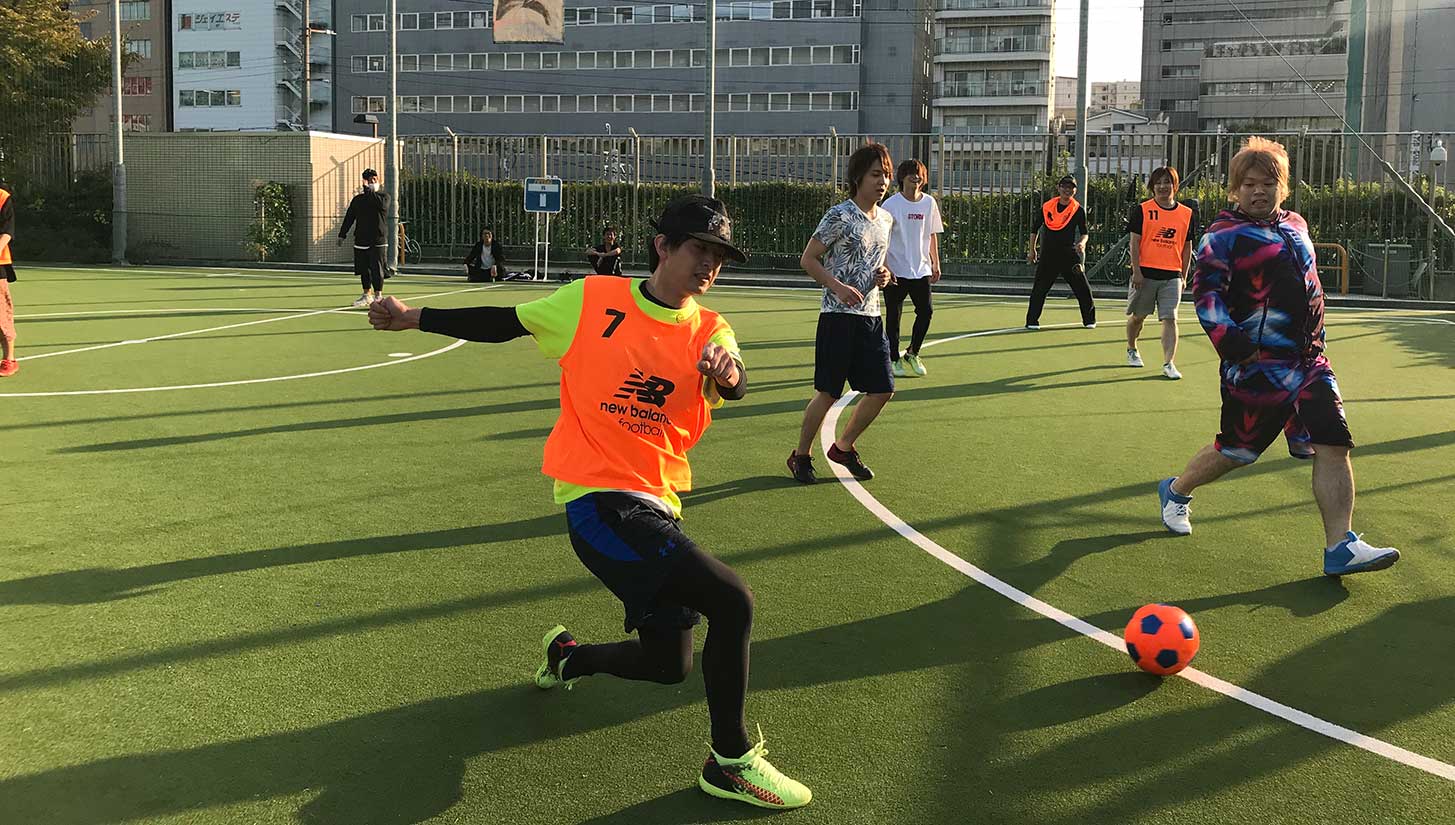 The five-a-side games were first to five goals, with groups of players waiting on the benches and sidelines for their turn to hop in. Football is the second-most popular sport in Japan behind baseball, but crowds stopping by to watch the pickup games showed how much appeal the beautiful game has for the locals.

The games featured plenty of skill — nutmegs and cheeky chips over the keepers — but it was the style of the kids playing that stood out most. They played wearing black face masks and silver chains, bright colored prints, and full kits of their favorite teams including Roma and Barcelona. While some donned traditional indoor and futsal shoes, others sported sneakers including some Nike Air More Uptemos and adidas x Pharrell Solar Hus. It was a place for the youth to show off their sense of fashion as much as their ability on the ball. 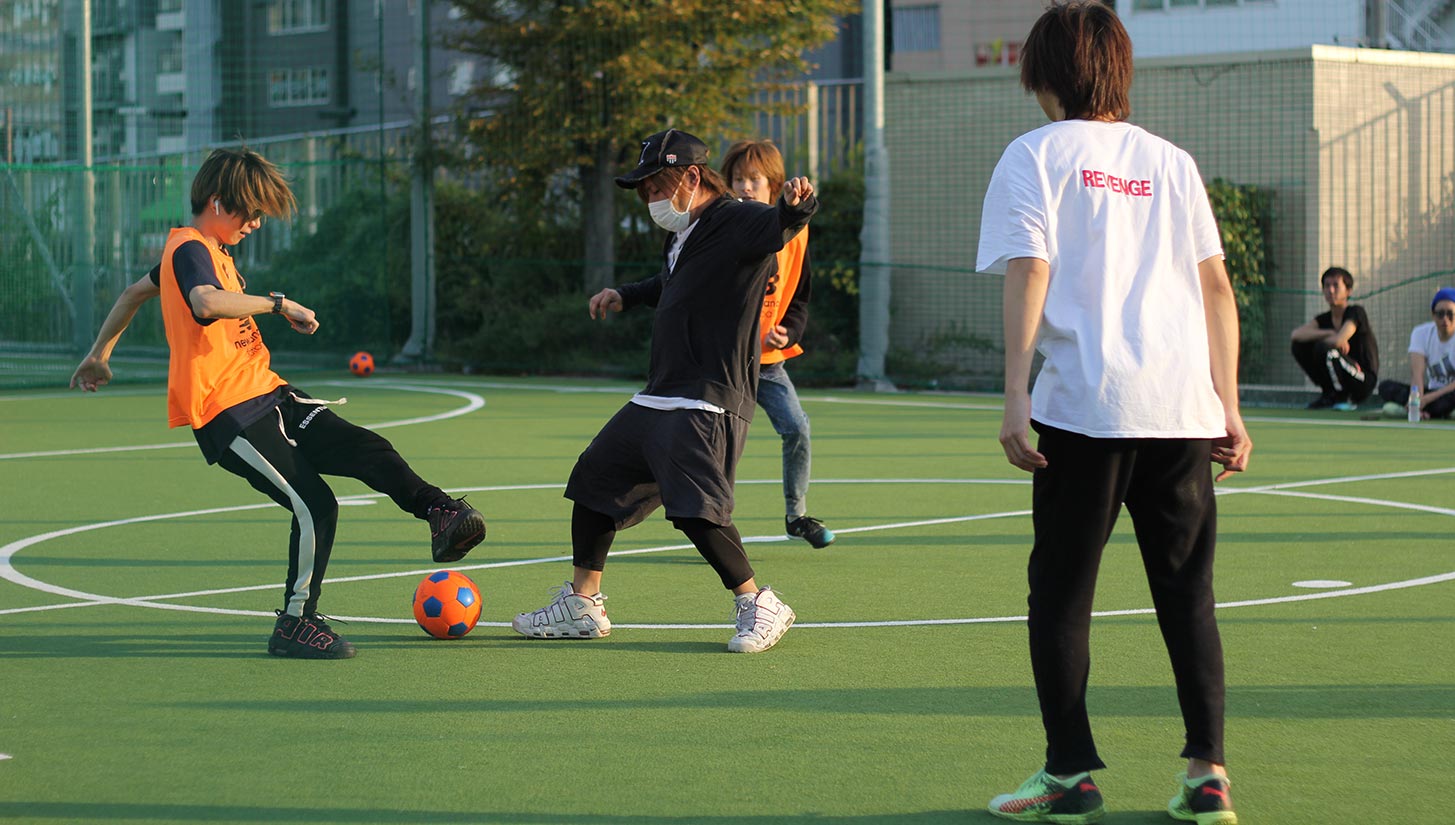 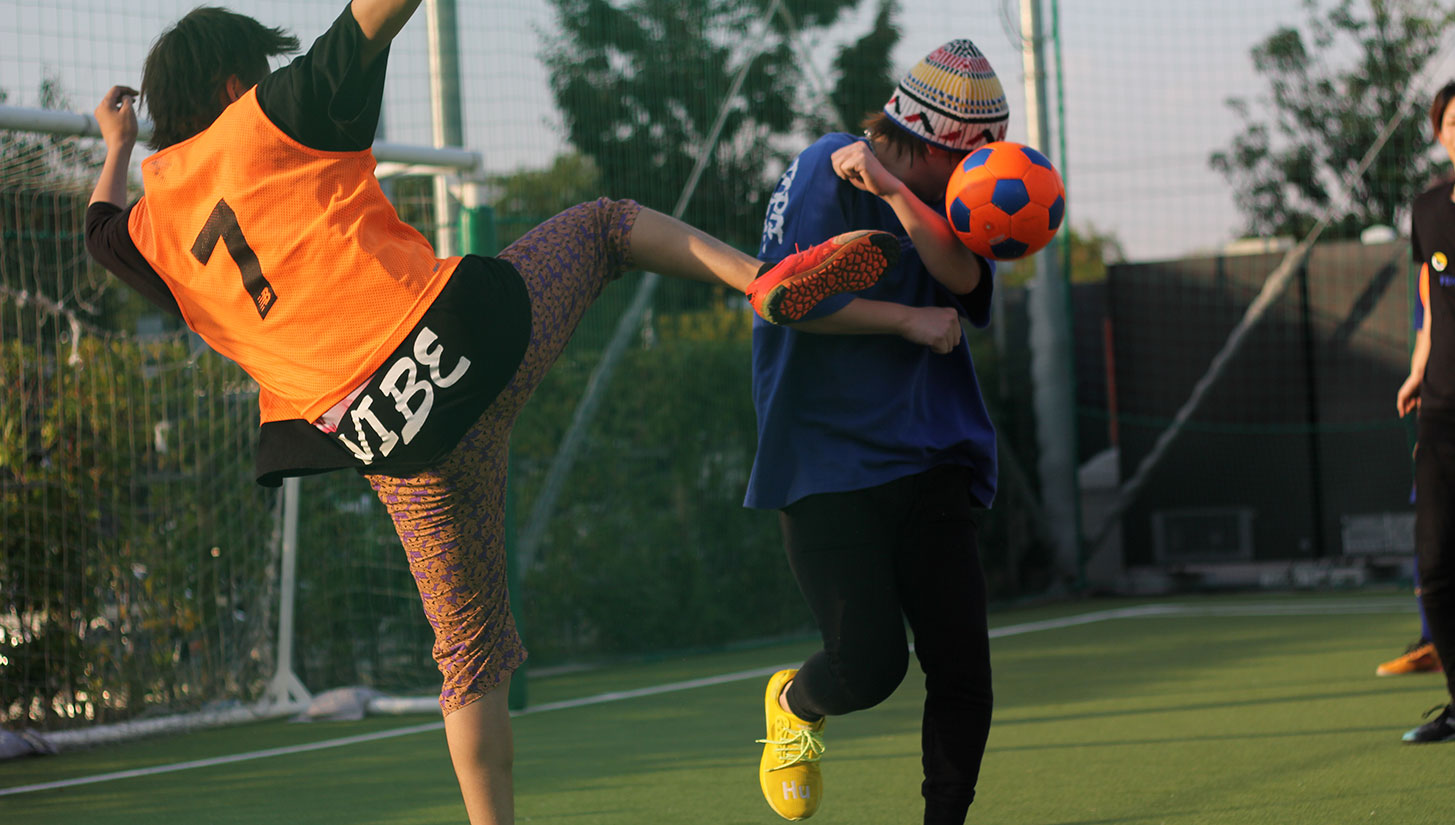 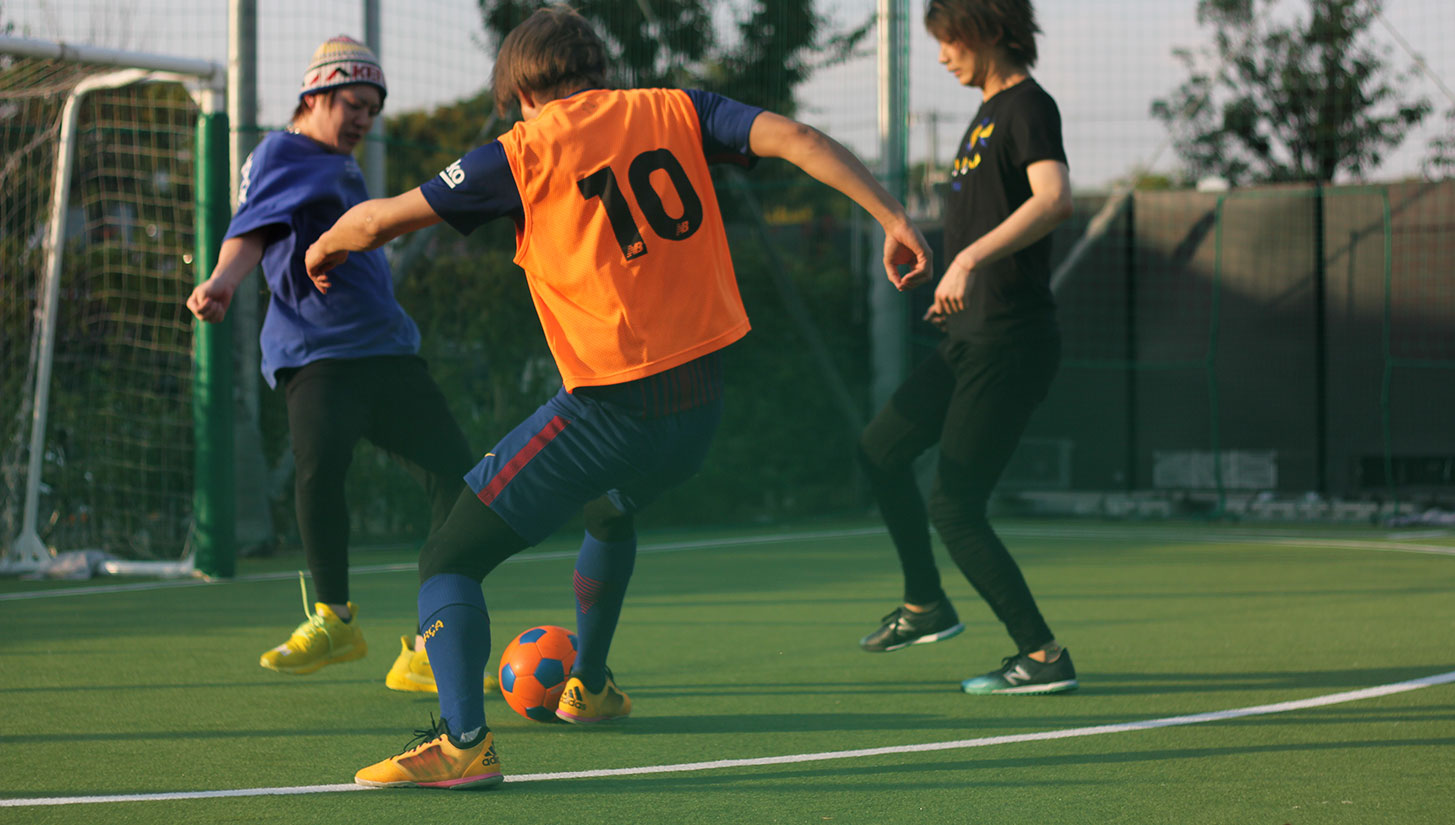 Two of the kids sported the samurai blue kits of the Japanese national team, with young star Takefusi Kubo of Real Madrid expected to represent Japan as it hosts the 2020 Olympics. Osaka will be a site for training camps and matches at the Olympics as well.

The competition was tough, with some heavy challenges knocking dribblers to the turf, but every mistake or fall elicited laughter from those on the pitch and in the crowd. For the players, the short games were serious, with pressing defense and weaving runs, but for everyone around the courts, it was entertainment, and the lighthearted energy was infectious. 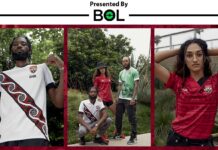 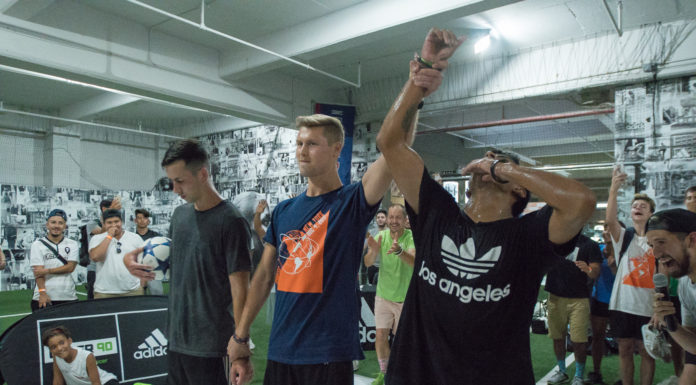