When I started out in freestyle football some nine years ago, the sport was (and probably still is) in its infancy. Since then we have seen the physical and creative boundaries of what is possible with a football pushed beyond imagination. One of the most notable and game-changing tricks we have seen, in my opinion, is the development of the J-Stall, aka the Jordan Stall, the idea of which I would have profusely laughed at if someone explained it to me those nine years ago.

This is where freestyle football really earns its merit for being ‘athletic’ and it could be argued this is one of the most visually spectacular tricks to non-freestyler onlookers. The art of performing a handstand while also being able to look up at one’s feet, while balancing a ball on the sole of the foot is nothing short of incredible and depicts god-like balance, strength, and coordination. But how did the J-Stall come about?

Well, this actually depends on your interpretation of what constitutes a J-Stall. While we can always entertain the idea that someone a very long time ago was practicing this kind of thing with a rock in a cave, I’m going to start off with one of the earliest recalled instances of someone combining a handstand with a football.

Back in 2001, Nike dropped a series of awesome TV commercials titled “Nike Freestyle,” with one for each major sport. In their mixed sports version (video below), we can clearly see someone maintaining a handstand position and balancing the ball on an extended foot at 0:07. That someone is a girl from Germany called Miriam. Her eye-opening gymnastic approach to controlling the ball helped others think outside the box, and more importantly, no special effects!

Another name in the early freestyle years that some but not all will be familiar with is Tor Vidar Leikvin or ‘Leiki’ as he was known. While he was certainly up there with the best at the time for developing strong and long lower combos, the Norwegian also brought some more acrobatic-style tricks to his repertoire. For example, he was the first person to reportedly do the Backflip Catch. Leiki, however, remains a bit of an enigma as he disappeared from freestyle almost completely around late 2008, and removed all his videos from the internet.

Those who knew him personally say that Leiki was the first freestyler to incorporate a handstand and balance a ball on the sole of the foot in shoes. One trick we can confirm Leiki was doing was taking up a headstand position after locking the ball on one foot and then placing it onto the sole of the other foot. He didn’t look up at the ball, however, and apparently could still feel the ball with the thin-soled shoes he wore.

Footage of Leiki is nothing short of vintage and in this rare video clip below, we can clearly see him demonstrate a handstand-sole stall move (in addition to many of his craziest tricks). With this in mind, some would argue they wouldn’t be surprised if Leiki actually was the first to do something ‘like’ the J-Stall that involved looking up at the ball, or a more clear-cut handstand position while doing it. I’ll leave it to you to draw your own conclusions from the video on how much of a pioneer Leiki was for this style of freestyle.

Fast forward closer to present day when Jordan Meunier of France filmed himself doing this move, and the term J-Stall (named after him) soon followed.

The move Jordan displayed here in this video uploaded four years ago includes the clear splitting of the legs (one arching behind and one arching forward), the head positioned beneath the butt, and the balancing of the ball on the sole of the foot—and it is this version that has become the most recognized technique of the trick without question. Note, to get the ball into this position, the thigh pop has really caught on instead of locking the ball on the front of the other foot, much like Leiki did. Some have also observed this handstand technique originates from b-boying.

In present day this trick has unquestionable popularity, especially in competitions, and it’s no wonder when you factor in the visual appeal as well as the difficulty needed to master the J-Stall. Many top freestyle athletes are blowing our minds with their variations of this trick, like Charly Iacono (Argentina) with his calf juggles and Brynjar Fagerli (Norway) with some crazy transitions into the J-Stall like his toe-bounce heel 360.

One of the most iconic people to take this trick to new heights is the Dutch maestro Maarten Van Luit. His variations for this move are from another planet and you can tell he puts so many hours into practicing it to take it to the next level of difficulty. As if balancing the ball up there wasn’t hard enough he can balance it off the outside of the foot and throw in those intricate little shin and thigh touches for good measure.

What does the future hold for the J-Stall?

There is no doubt that the limits for this trick will continue to be pushed. We are already beginning to see that some freestylers can carry out an entire 30-second round in a battle in the J-Stall position with cool variations and transitions. In my opinion, it’s like how we learned to do a whole bunch of tricks sitting down and now refer to them as ‘Sits.’ Why should J-Stall variations be any different? It could almost be considered a category in itself if it keeps developing how it is. Maarten has already expressed his desire to get a one-handed version down, which would be absolutely insane and possibly flip the whole game on its head once again! 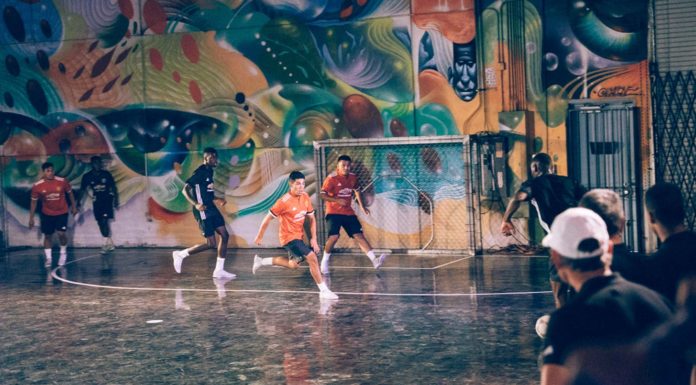