What started as a love for the beautiful game has evolved into a list of accomplishments long enough for a lifetime. Los Angeles native Jasmine Henderson has used football as a platform to promote gender equality, while also sharing lessons from her life’s experiences as a motivational speaker and author.

World record holder. Motivational Speaker. Former professional athlete. Single mother. As someone who has experienced a fair share of breakthroughs and setbacks in her life, Jasmine Henderson refuses to let those labels define and limit her. Instead, she continuously looks to explore different avenues while inspiring as many people to believe in themselves as she can.

Most recently, Henderson, along with 29 other women participated in the highest FIFA-sanctioned match ever recorded, which took place in a crater on Mount Kilimanjaro at an altitude of 5,785 meters (about 18,980 feet). The record-setting match was set into place by Equal Playing Field, an organization that advocates for gender equality in sports. 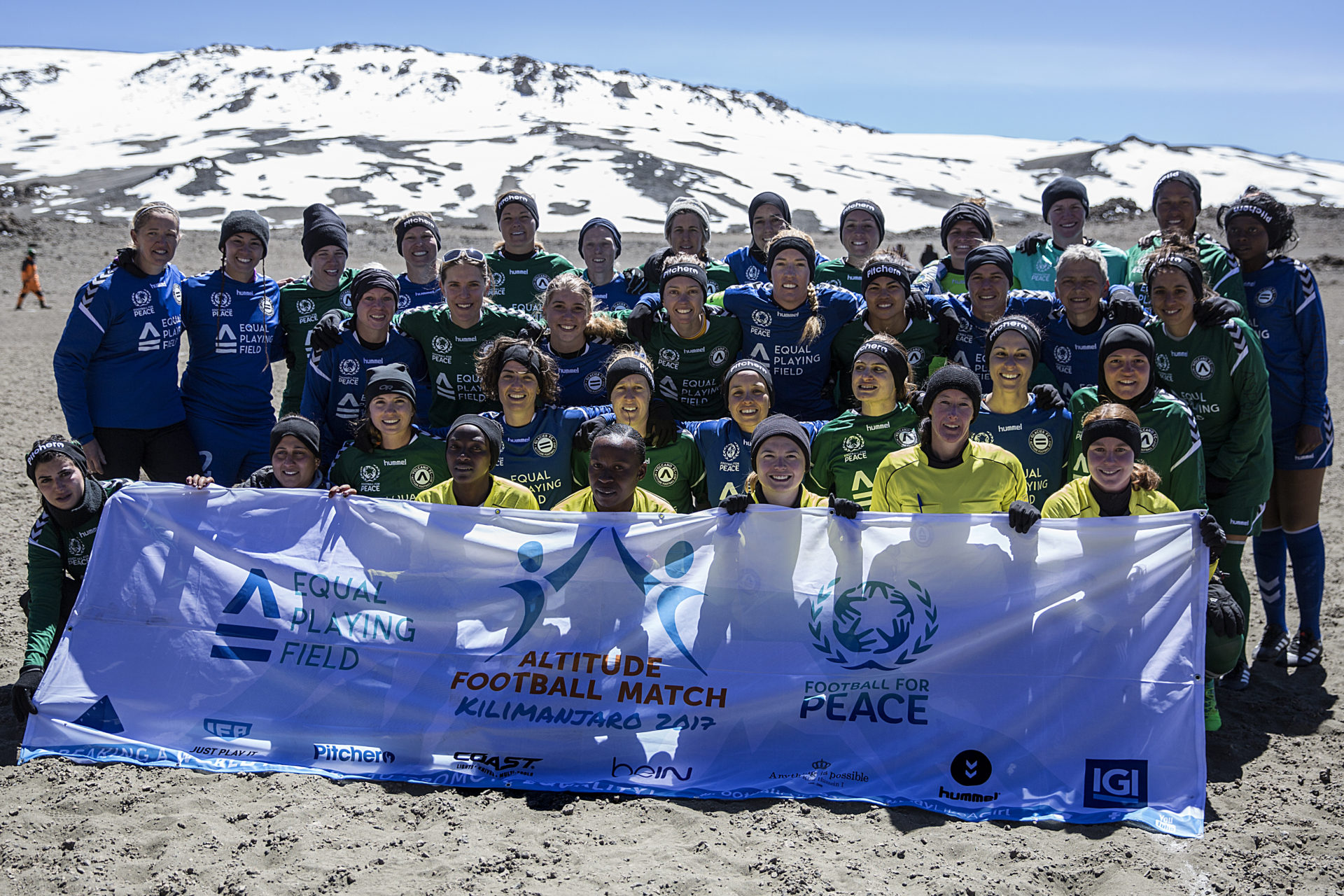 Henderson’s story begins as a 5-year-old, pink obsessed, Barbie enthusiast that decided to play soccer in the footsteps of her older brother. Like many, she quickly fell in love with the beautiful game, and by her high school years, it became her life.

“I had practice with my club team three times a week, and I was practicing with the boys club team twice a week,” Henderson said. “Everybody at my high school would be out on Friday nights and I’d be at home on the treadmill. That was me.” 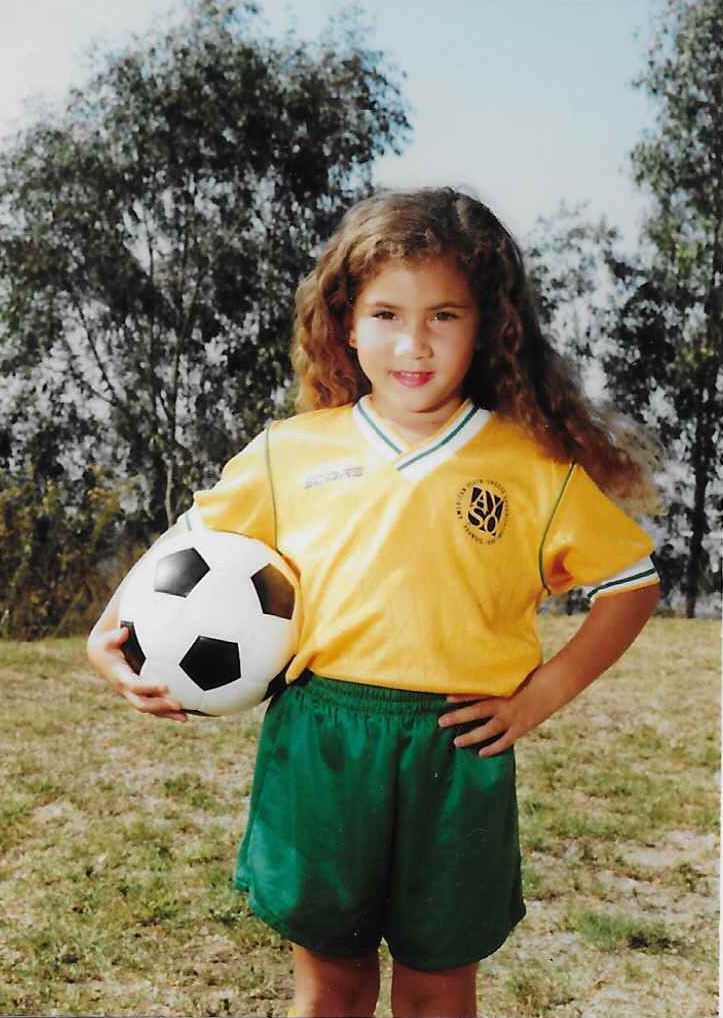 Henderson’s tireless work ethic eventually propelled her to the top of Kilimanjaro, but more importantly it enabled her to overcome the relentless adversity she has faced over her lifetime.

Henderson tore her second ACL (the first was while playing collegiately for Cal State Bakersfield) in a co-ed tournament after beating a man off of the ball. Upset at being bested by a woman, the man hit her with a hard payback foul that resulted in the knee injury. This incident only added more fuel to Henderson’s mission to eradicate the stigma of women’s sports being inferior to men’s.

“Why is it not ok for me to be at the same level, if not better than you?” Henderson asks. “It’s stuff like that that makes me really passionate about pursuing gender equality and projects like we did with Equal Playing Field.” 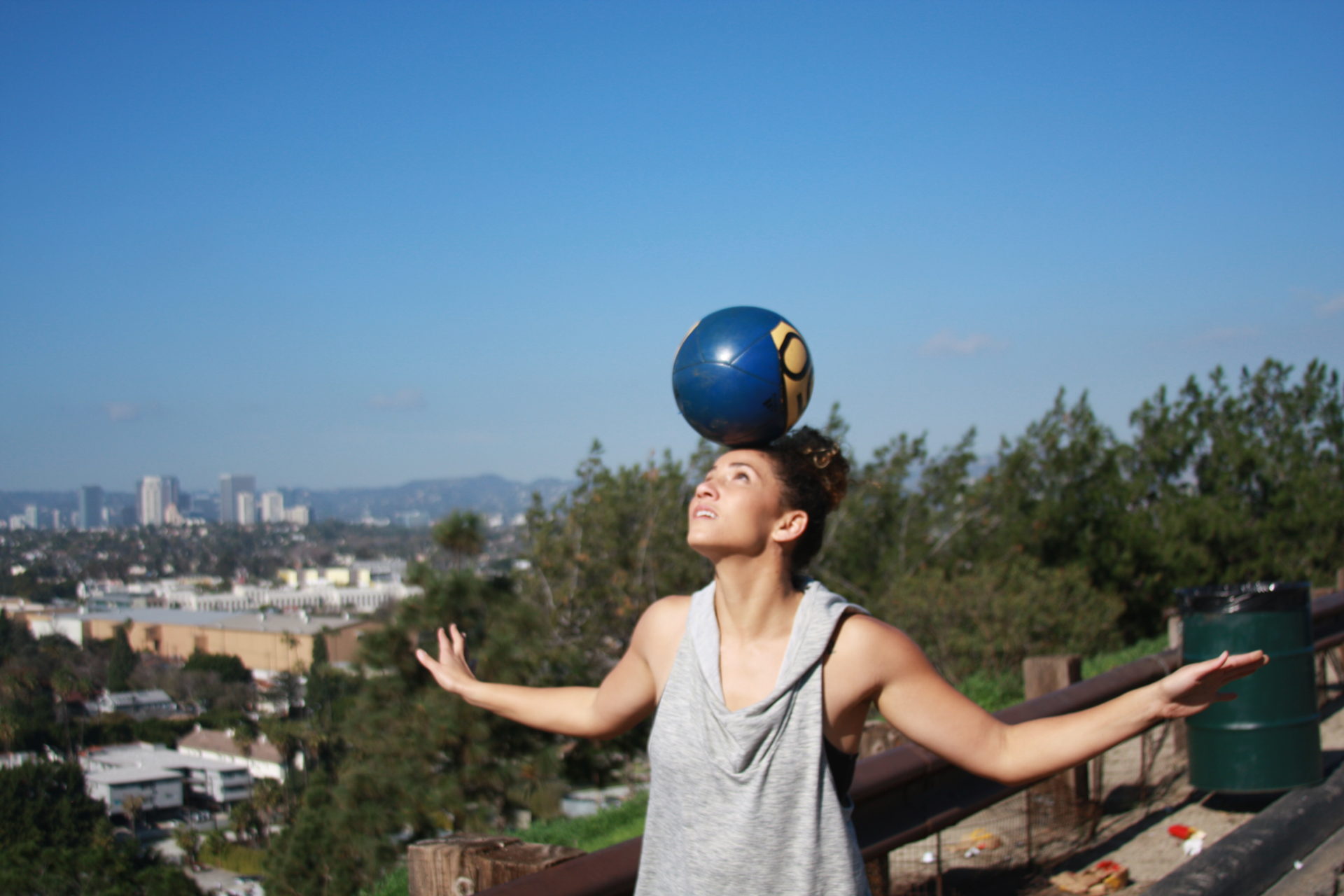 After recovering from the injury, Henderson received an offer to play professionally in Brazil, where she was the only American on her team. However, midway through her season she faced yet another setback when she found out that the contract she signed, which was written in Portuguese, did not obligate the team to pay her.

At this point in her career, Henderson was already thinking of potential endorsement deals with the amount of media coverage and exposure her team received in Brazil, but a lack of structured salary crushed these hopes and she returned back to the U.S., where she would find something new to pursue.

Upon her arrival stateside, a new phenomenon caught her eye — professional wrestling. After seeing her first WWE match on her 25th birthday, Henderson thought to herself what she always does: “I could do that.”

With a background in Krav Maga and Jiu-Jitsu, Henderson had no problem convincing a talent agency to give her a chance, and she was set to go to Florida for her tryout. However, adversity crept itself out of the darkness once more, and two weeks before her flight, Henderson found out that she was pregnant.

“Everybody at my high school would be out on Friday nights and I’d be at home on the treadmill. That was me.”

Like she always has, Henderson took the adversity in stride and wrote a book and launched a motivational speaking career out of her experience. She wasn’t quite done with football yet either.

Henderson played a season with the Santa Clarita Blue Heat of the United Women’s Soccer league in 2016, but she missed the creative style of football that is synonymous with Brazil. That left her at a crossroads — uproot her life in Southern California and move with her son to continue her career as a professional athlete in Brazil, or go full-time with her speaking career.

Knowing that she could always make a return to football, Henderson decided to focus more on growing as a motivational speaker. Then along came Equal Playing Field. When Henderson heard about the organization’s plans to play on Kilimanjaro through a mutual friend, she knew she had to participate.

Equal Playing Field brought together 30 women from six continents to play the world’s highest-altitude soccer game ever recorded in the effort to spread awareness for gender equality in sports. Many of the participants are current or former professionals, including former USWNT gold medalist Lori Lindsay.

For Henderson, it went beyond equal representation between men and women. She wanted to not only prove to herself that she is still capable of greatness, but also to set an example for her son, who is on the autistic spectrum.

“People are so quick to label you as just a woman,” Henderson said. “It’s the same thing for my son. Having autism is just a label. I knew if I could do this, climb this mountain, and show other women and my son what is possible, it would show that we all are more than just what we are labeled as.” 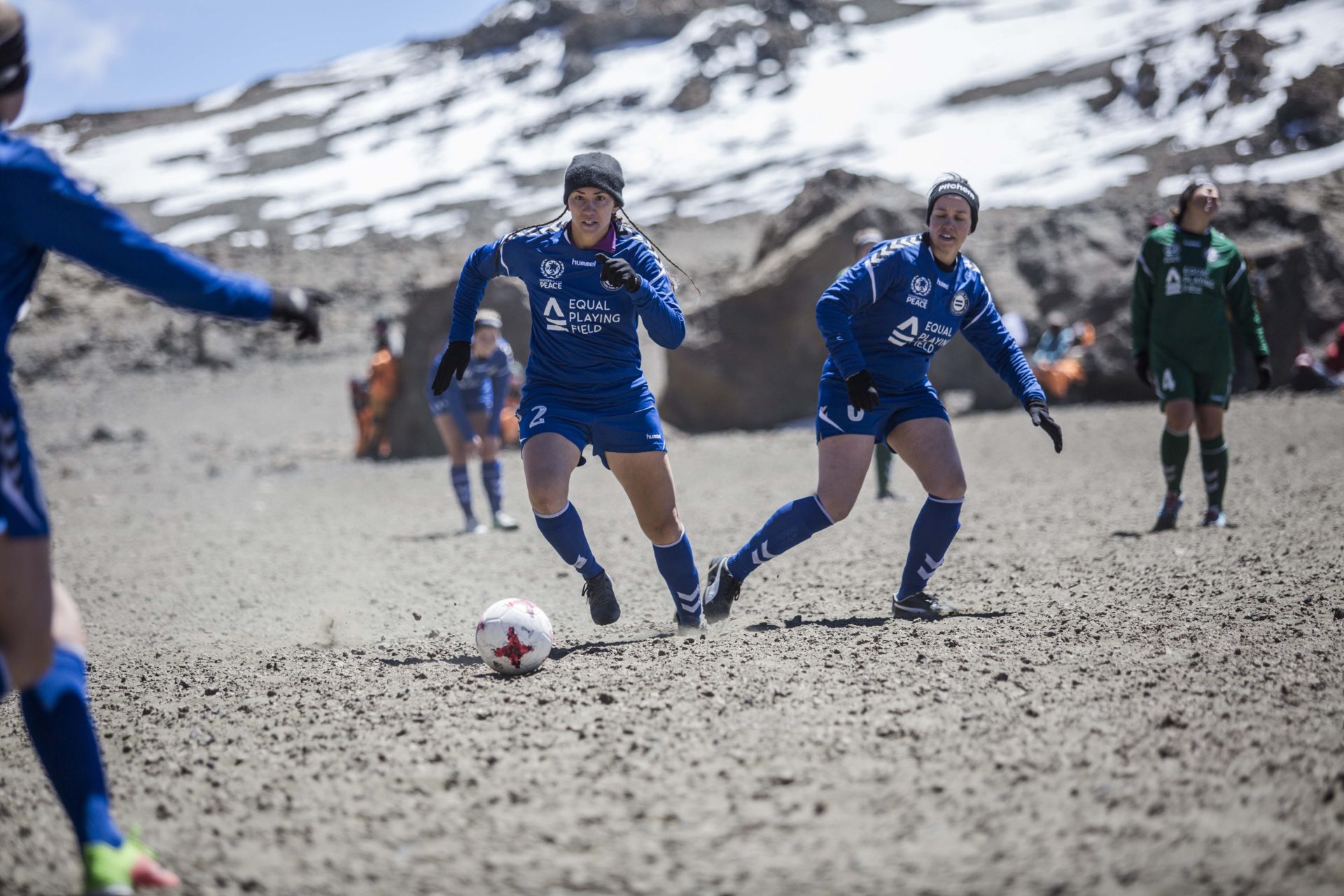 Event participants, including the players, organization members, and camera crew, completed the treacherous seven day climb up Kilimanjaro, which included a five hour hike on game day that started at 2 a.m.

The match itself was a 90-minute, FIFA-sanctioned game, complete with FIFA referees. Numerous players, including Henderson, played all 90 minutes due to the substitution rules.

“It was such a beautiful experience to see all these women from different countries all having that one bond and struggle of being a woman,” Henderson said. “I’m still getting chills right now thinking about it.” 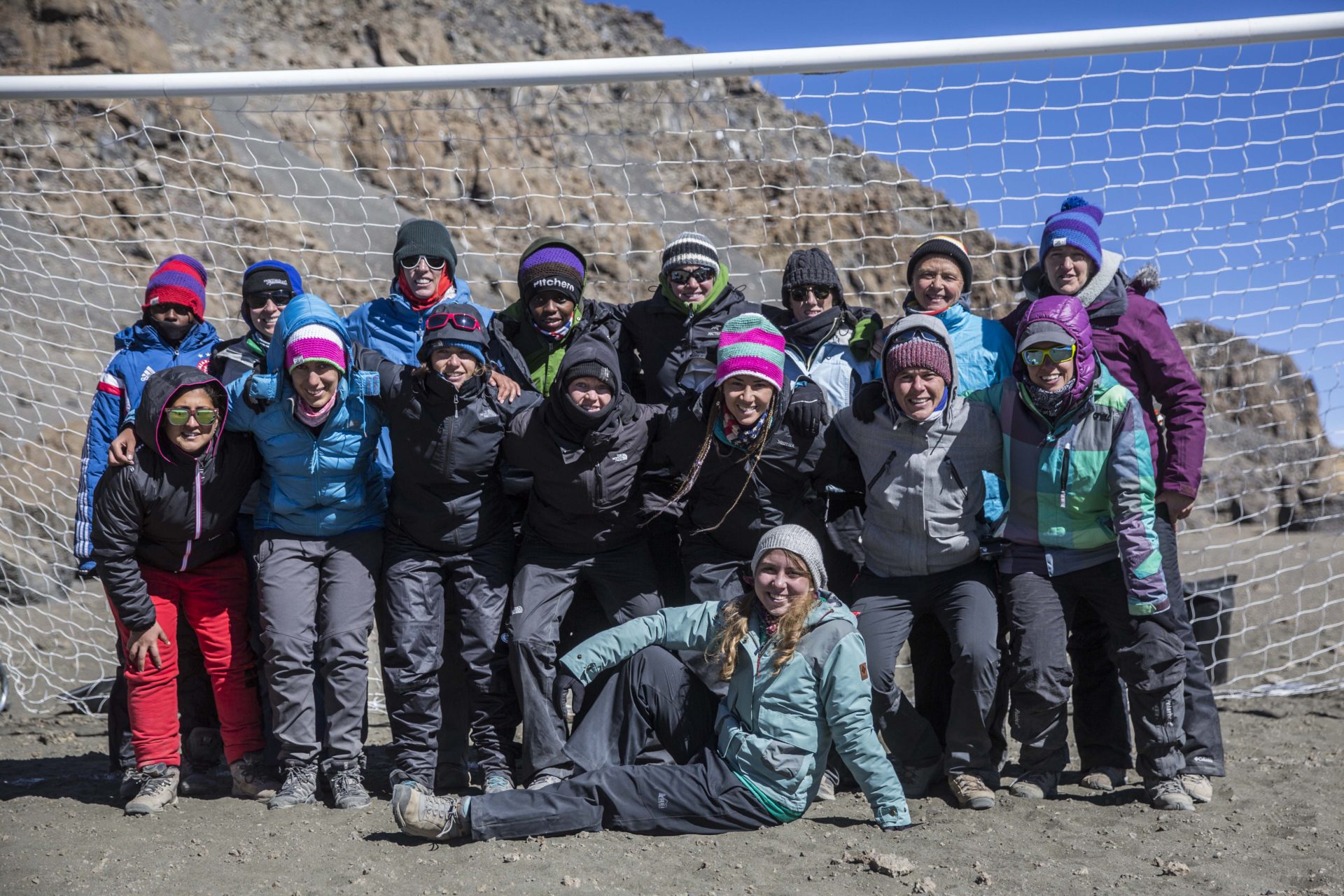 Being the motivational speaker she is, Henderson spoke a message that applied not only to her teammates for their upcoming match, but for anyone, woman or man, in their own lives.

Following the match, which ended in a 0-0 tie, the players came together in celebration before completing their journey to Kilimanjaro’s 19,341-foot peak. 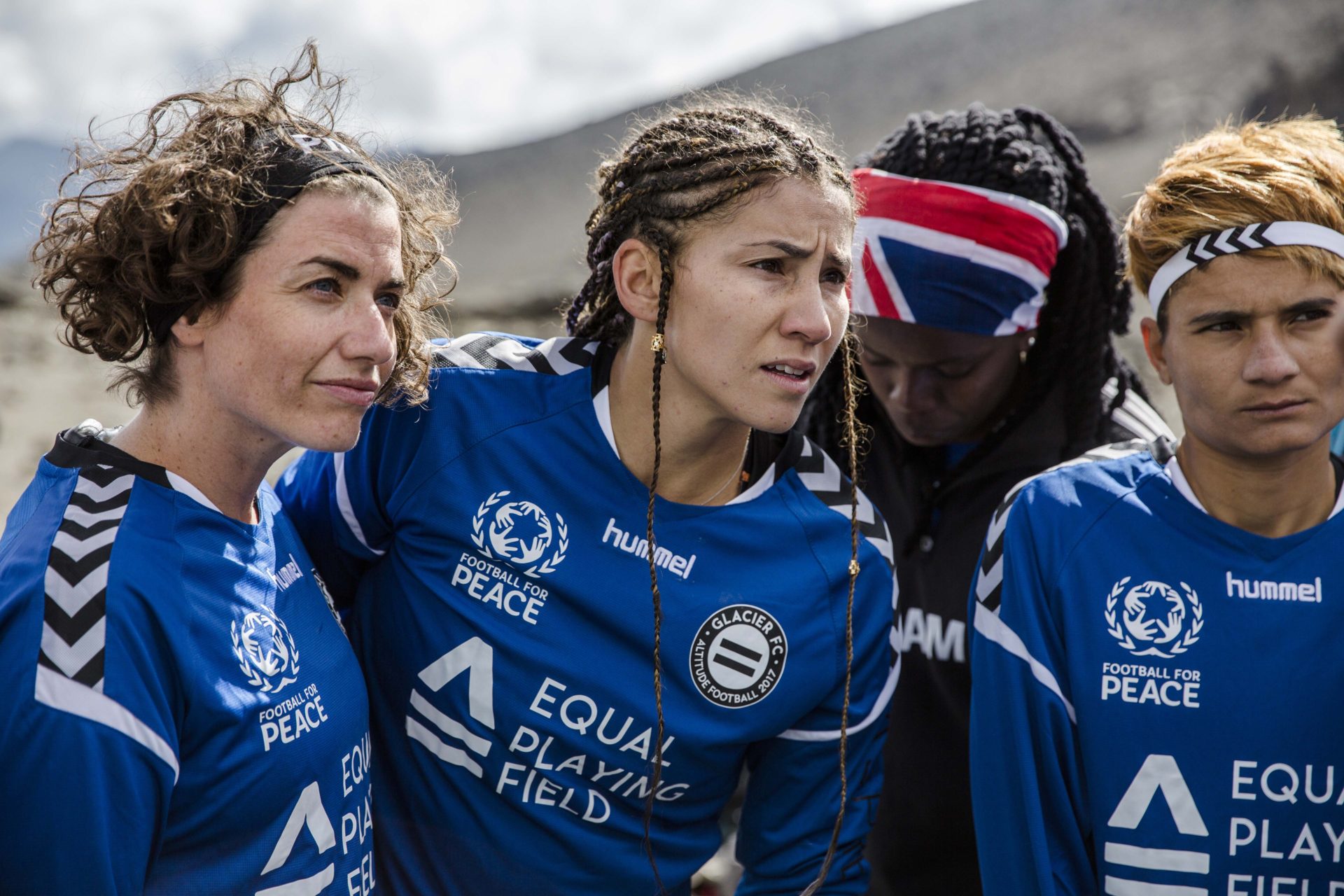 Henderson is also currently working on a book about her journey on Kilimanjaro, as well as expanding upon her speaking tour and exploring TV show opportunities. Most importantly, she is continuing to preach the significance of one of the most recurring phrases in her life so far — “Yes I can.”

“Life has a way of challenging your core,” Henderson said. “I think the biggest thing is not giving up. Not giving up on the dream you have and to see it as being possible. No matter what defeat you feel like you’ve had, you can always rise again.”

As a sports star taking on the role of motivational speaker, her journey is reminiscent of many sports speakers who turn their talent towards helping, enthusing and energizing others.

For more on Jasmine, check out her website and follow her on Instagram. You can find her book, A Broken Vow: My Story From Virgin to Single Mom on Amazon. 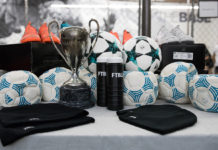 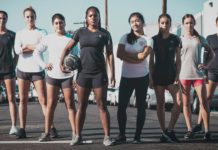 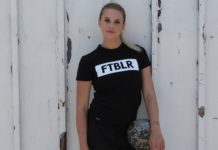 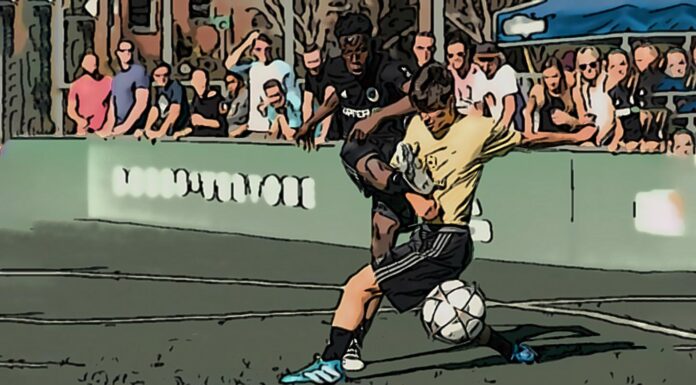