Kicking off its two-week residency at Washington D.C. gallery HOMME, Guerrilla FC celebrated the game’s inherent street culture like only they could, launching a new line of merch and hosting a panel discussion on global football equality and and the advancement of the women’s side of the game. We were on the scene at the opening weekend, taking in everything the ultra-savvy creative collective had to offer.

Since its founding three years ago, Guerrilla FC has sewn together various elements of football culture, fashion, and art with a global urban twist. Founder Justin Salhani’s goal of creating “a voice of the football disenfranchised” worldwide has led to a variety of jaw-dropping kits, street football and futsal clubs, and a sustained presence in Washington, D.C. and San Francisco. It’s no surprise then, that Guerrilla FC’s exhibition and pop-up shop, “The Mind of Guerrilla,” is a thought-provoking experience filled with grail-worthy gear. 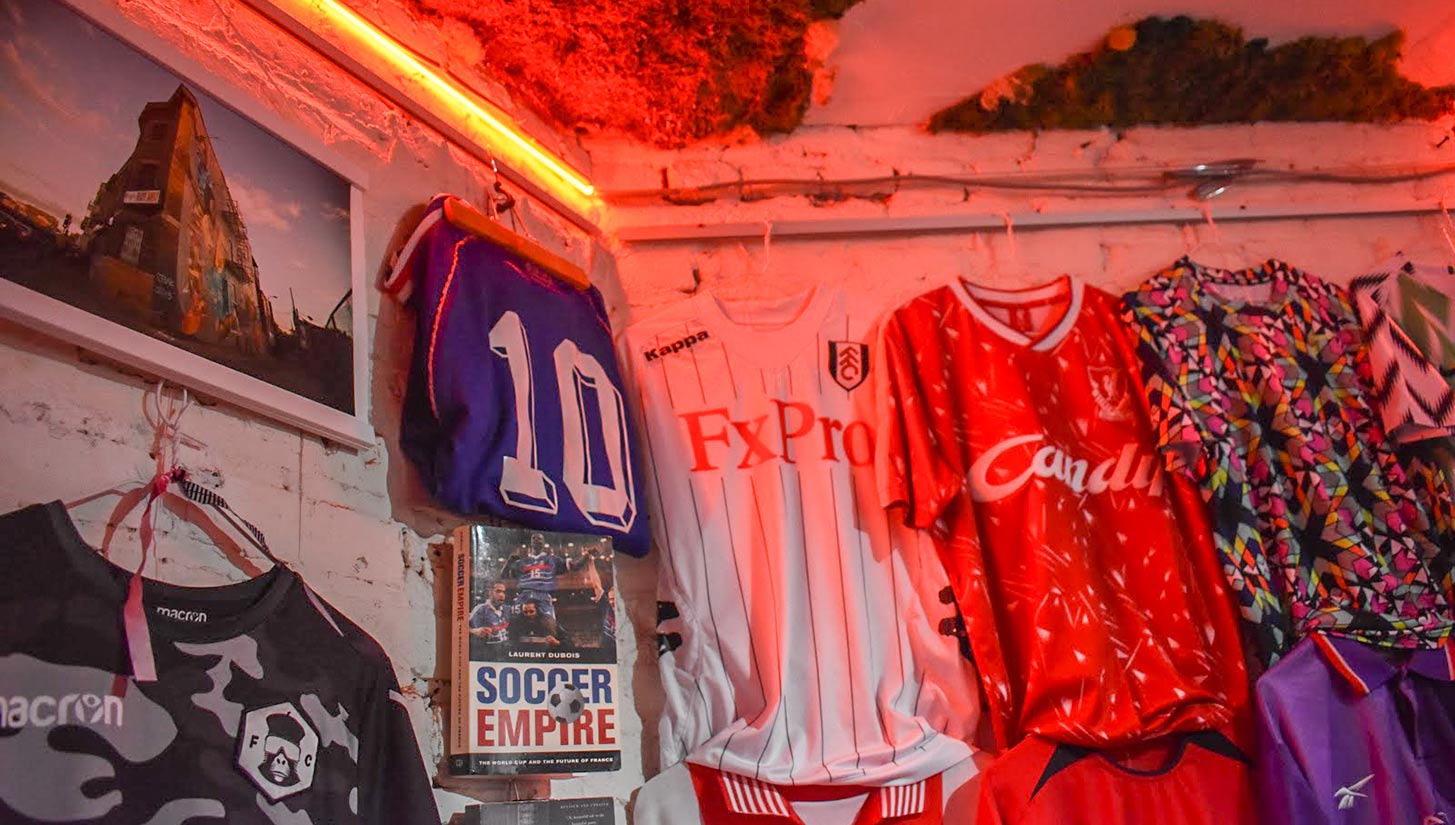 Made in collaboration with HOMME DC, a Washington-based gallery that caters to emerging artists and brands, “The Mind of Guerrilla” provides a multi-sensory experience, essentially drowning the visitor in all things football. A video installation features vintage televisions playing matches from years, if not decades, past. Selected photographs from Sonya Kondratenko and Guerrilla FC member Magee McIlvane showcase elements of football culture that aren’t shown weekly on ESPN or Sky. A collection of kits representing clubs based everywhere from Manchester to Nigeria to Rome adorns one wall, creating a rainbow of allegiances and histories. Despite (or perhaps because) these installations are featured in a space the size of a studio apartment, a personal sentiment permeates the exhibition. You are truly welcomed inside the minds of those who created the exhibition, and by all accounts, “The Mind of Guerrilla” is a unique one.

Inside the Guerrilla’s Mind 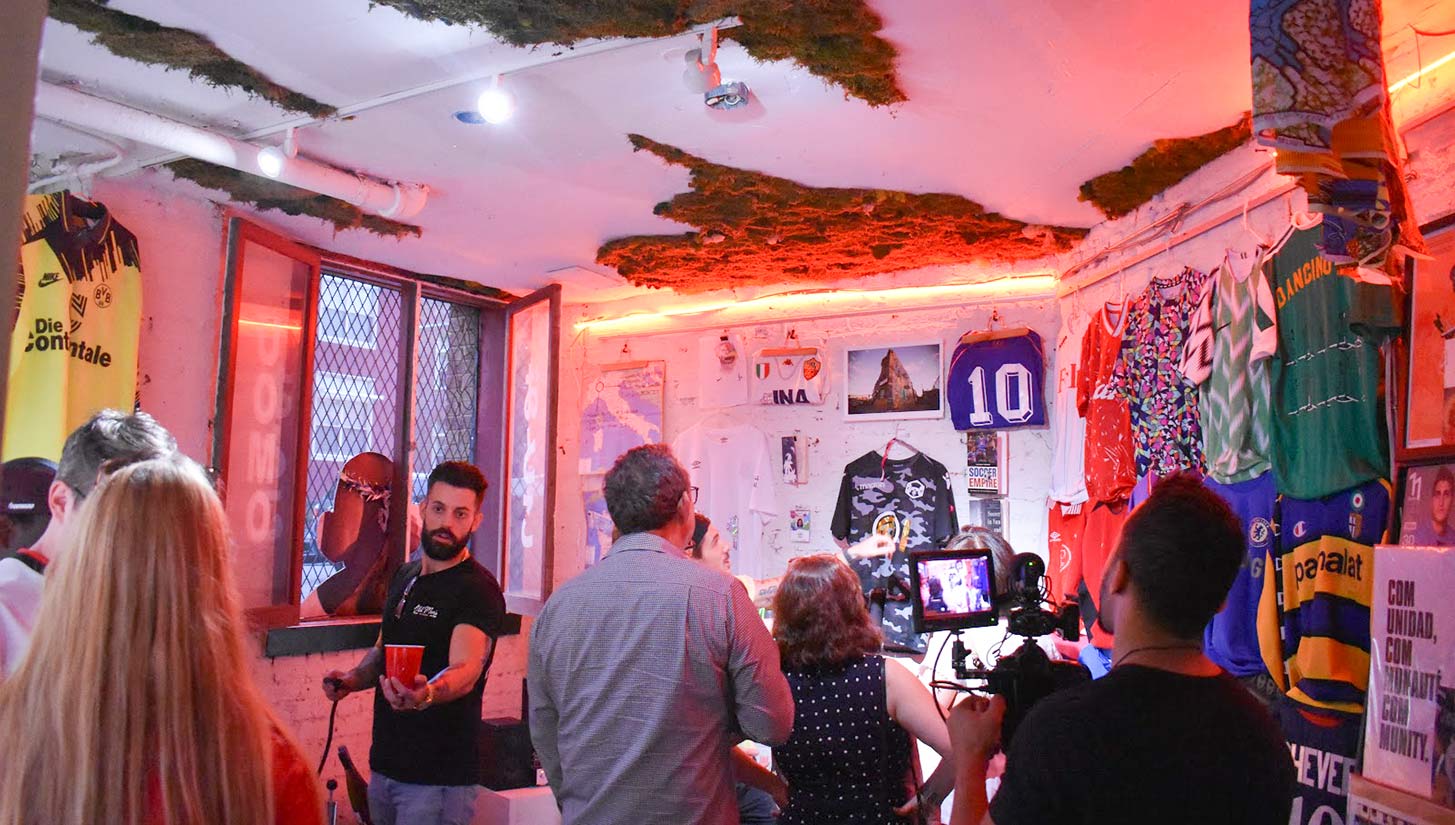 In describing the thought process behind this collaboration, Guerrilla FC member Ruben Gzirian said, “We tried to show the creative inspirations behind Guerrilla FC as well as the diverse talents and perspectives of our community — [creating] an extension of the ethos of Guerrilla FC.” Along with Salhani and HOMME DC curator Amir Browder, Gzirian conceptualized the event’s instillations.

Kondratenko, one of the exhibit’s main photographers, added, “The Guerrilla FC exhibition was really raw and organic. Ultimately, it was a way to show how football lives in the city outside of the typical MLS or mainstream fandom. It was amazing to talk to people at the event who all had different stories of how they arrived in D.C. and the ways that they interact with football. From graffiti artists to people who work traditional 9-5 jobs, it was a mixture of people from all different walks of life coming together to celebrate one thing.”

“[My installation in particular] shows the emotions of the players who were on the field the night of AC Reggiana’s final match. I think quite often we forget that footballers are real people just like us. They have emotions, and especially abroad when you’re playing for promotion and relegation, one game can change your whole life.” 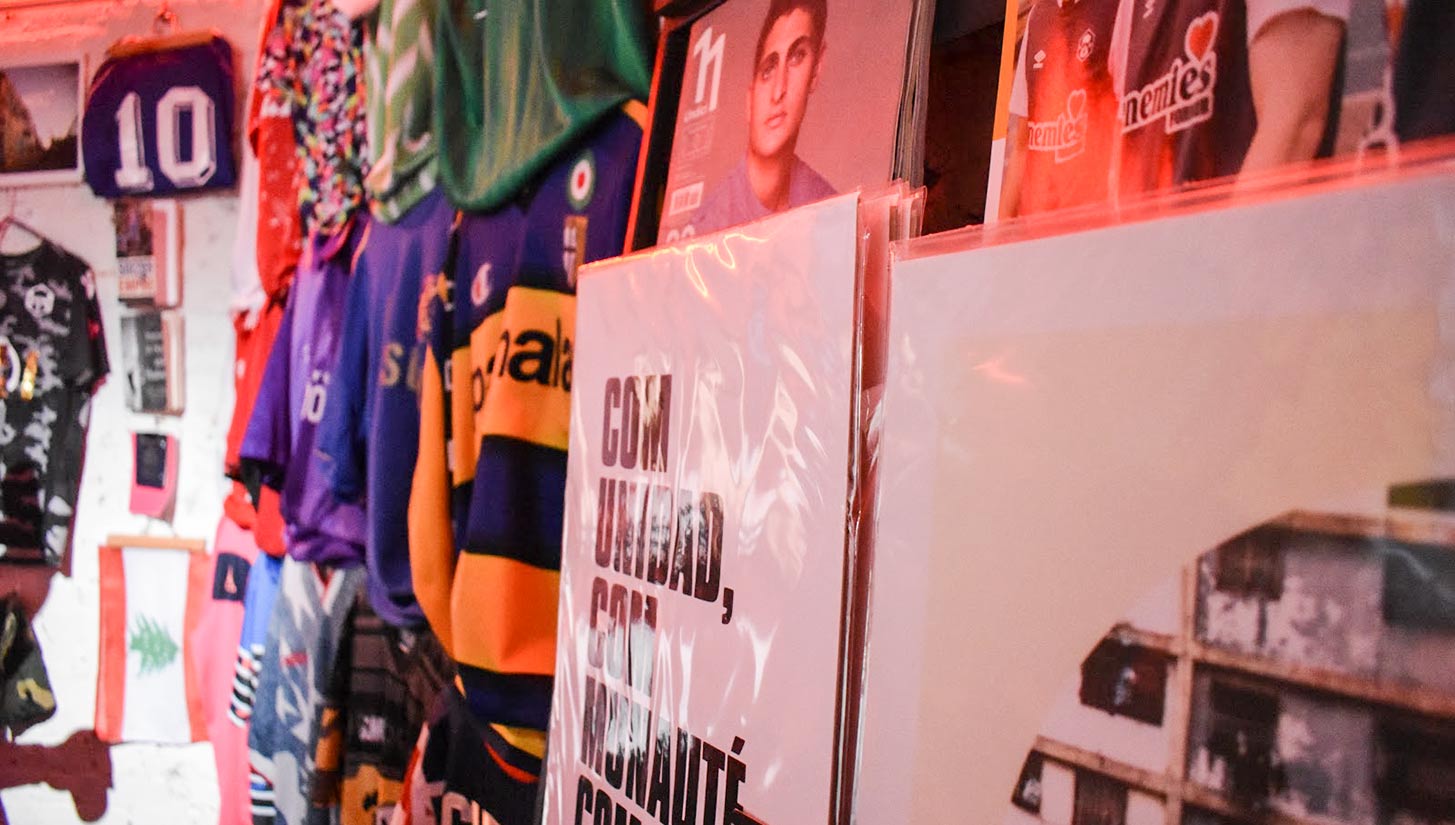 The collaboration between Guerrilla FC and HOMME DC’s Browder was originally born out of friendship and a shared love of football. Browder, an A.C. Milan fan, said it was a perfect opportunity to combine professional with personal, to showcase a side of Washington D.C. that isn’t typically seen.

“Art is about community, and the guys [at Guerrilla FC] have made a really special community here,” Browder said.

Despite expanding more directly into the world of art through “The Mind of Guerrilla,” Guerrilla FC certainly hasn’t forgotten its fashion roots. Some fantastic exclusive merch is available only at the HOMME DC location, including an of-the-moment tie-dye shirt celebrating the Women’s World Cup by cheekily proclaiming “You Don’t Need Balls to Ball” and a simple “futsal” black dad hat. In tandem with Guerrilla FC’s Beltway kit and other prior drops available at the exhibit, minimalists and maximalists will all find something worth buying when they drop by. 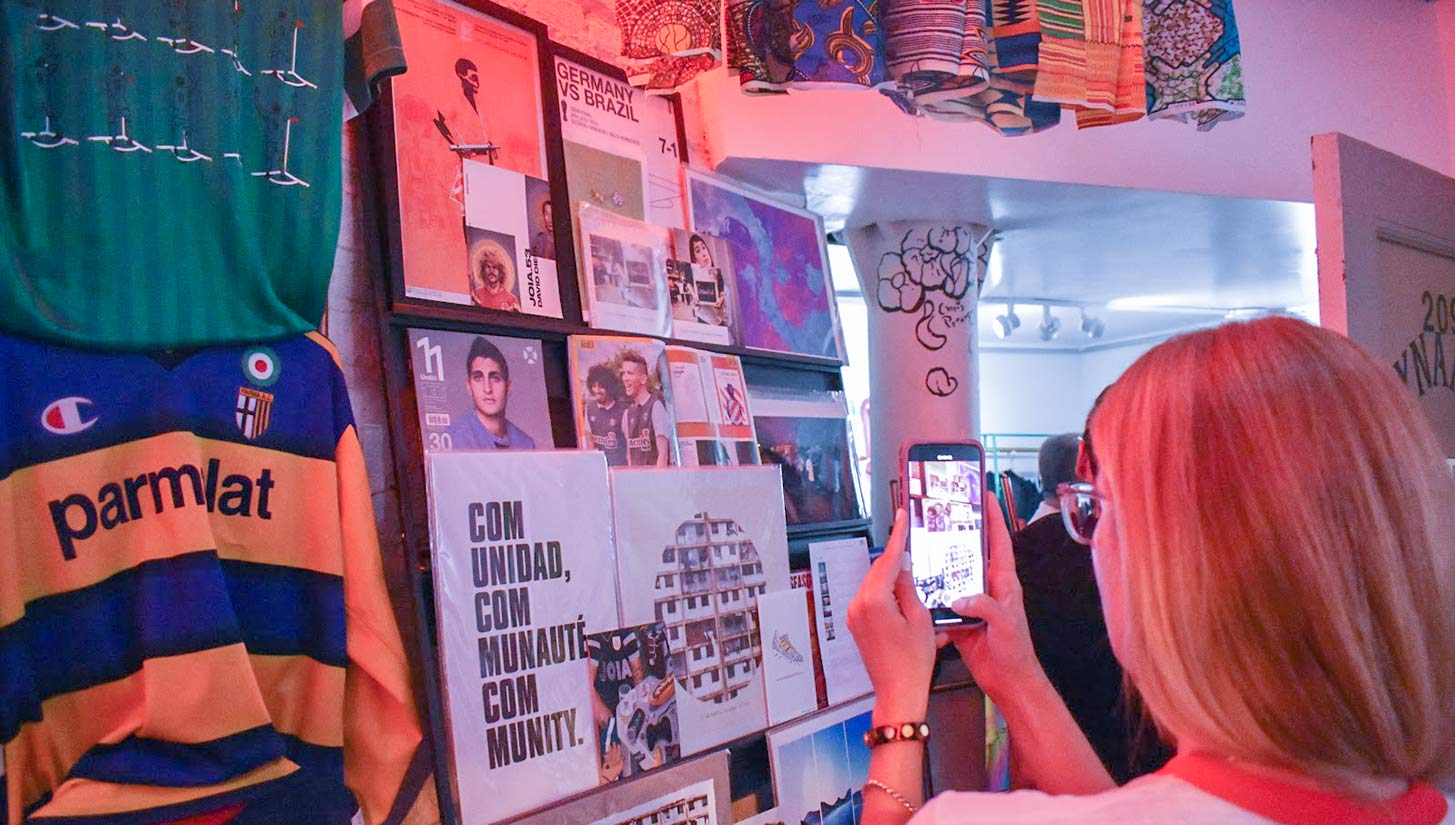 Yet “The Mind of Guerrilla” is not just a unique experience in the District because of the work put into the installations or the exclusive gear. It’s the combination of the people behind the installations and the people viewing them who make this such a compelling event. Talk to one member in attendance and you’ll hear about how football first caught their eye. Another will explain what brought them to an exhibit hidden away on a quiet street in NoMa. A third may even describe what they see as the future of the game.

The idea that this exhibition is more than the sum of its parts truly shone through with the panel discussion that was held on June 29. Kickstarting the event’s first full day, the panel featured Kondratenko, writer Ritika Bhasker, MLSFemale beat reporter Sarah Kallassy, Georgetown Professor Erin Twohig, and “groundhopper” Jessica Malone. Their wide-ranging discussion touched on everything from the ongoing Women’s World Cup, the experience of attending women’s football matches in the United States and abroad, and the problematic wage gaps that still persist in all aspects of women’s football.

Opening night of “The Mind of Guerrilla” at @homme_dc was last night and today we hosted a panel on the World Cup and football culture at large. We’re still at Homme until July 12. Pass by and check out the exhibition before then. #mindofguerrilla #guerrillacomeshomme

Each panelist brought a different perspective to the current state of women’s football and how it should grow, but there was universal agreement that “You Don’t Need Balls to Ball.” For the panel, the crucial next step in the development of women’s football worldwide must be increased access. Professor Twohig noted that although it’s disappointing that it is “nearly impossible” to watch international women’s clubs in the United States, there is an ongoing glimmering hope that will only continue to grow brighter with the success of the 2019 World Cup.

“I’m encouraged to see that the (Washington) Spirit will be playing two matches at Audi Field this season versus only one last year, and I hope that upward trend continues,” Twohig said.

“The work Guerrilla FC is doing is amazing,” Kallassy said. “Women represented in the football world as athletes, coaches, trainers, referees, front office staff, media, journalists, or any position imaginable are all critical to changing the conversation and shifting perspectives. I think normalizing women’s work in the football world is of the utmost importance.”

Football Should Be For Everyone 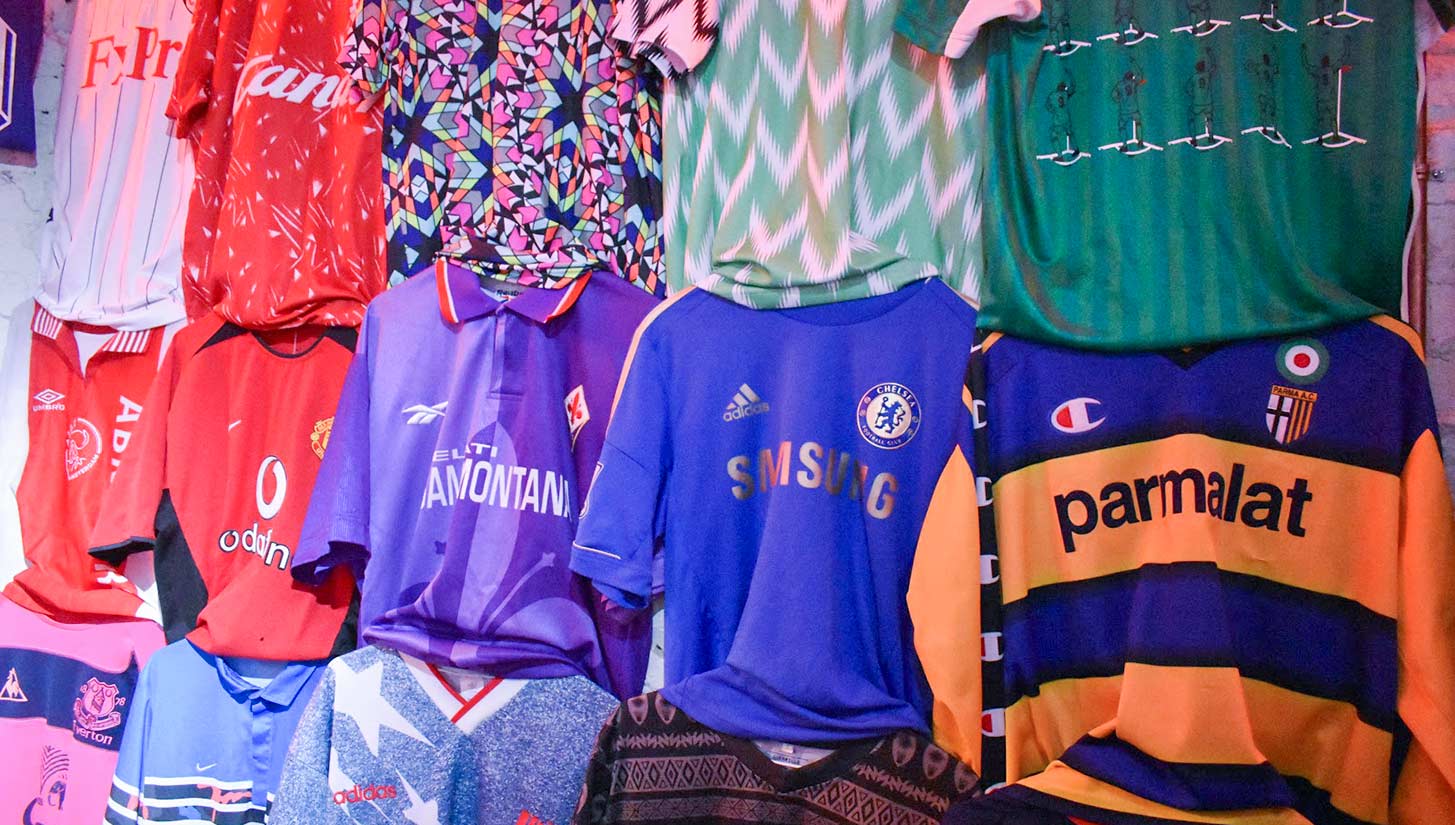 If there’s a best way to sum up the entirety of The Mind of Guerrilla, along with the mission of Guerrilla FC, it’s through the words of Gzirian.

“Our whole goal as a group is to bring people together that love football but feel that their voice and their interpretation of the game has been lost in modern football culture,” he said. “We want to be the representatives of football in DC as we see it — a game of inclusion, a game where anyone from any background and socioeconomic standing can come and express themselves without feeling any pressure to conform.”

Incorporating an always-welcome discussion on women’s football into “The Mind of Guerrilla” confirms that Guerrilla FC can be a universal representative of football in the nation’s capital and beyond.

“The Mind of Guerrilla” will be on display at HOMME DC (52 O St. NW, Washington, D.C.) until July 12, when a closing party featuring a live taping of The Shirtless Plantain Show will cap Guerrilla FC’s two-week residency. 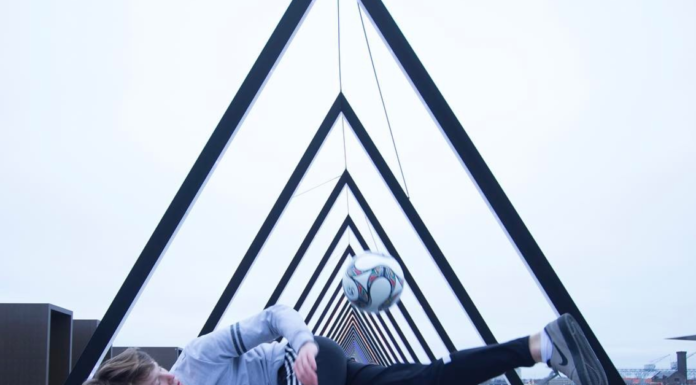