Before today’s industry giants took over, there was only one name in football kits — Admiral. We reminisce on the brand’s best designs from their brief dominance in the ’70s and ’80s, while also examining their fall from the top and current state in the kit game.

Walk into any football apparel store these days and you’re met with a visual feast. A veritable kaleidoscope of colors and styles by all of your favorite brands. Anyone with a passing interest in the game can easily place each team with their supplier. Barcelona and Nike, Man United and adidas, West Ham and Umbro, and so on.

With most teams now bringing out at least three kits per season, not to mention limited edition shirts or collaborations (PSG and Air Jordan for example), the need for constant change is obvious. We’ve also seen innovations in design elements, such as a slew of adidas kits being made entirely from upcycled plastic waste from the ocean.

The choice for the modern consumer is remarkable, but there’s one name that you’ll not see amongst the vast array of shirts available today — a name that was once so synonymous with football apparel that no one else dared to tread the same patch. One name to rule them all.

Admiral was on everyone’s lips and with good reason.

Founded as a hosiery manufacturer back in 1903, the company was originally called Cook & Hurst, after founders Christopher Cook and Harold Hurst.

Based in Leicestershire, England, in the town of Wigston to be precise, it would be another 11 years before the Admiral arm of the business was born. Suppliers of underwear to the military, the English Royal Navy commissioned the company to provide sportswear for their troops during the First World War.

With the most senior naval rank being the Admiral, the naming of the new line was obvious. Moreover, as the rank signified superiority, the brand wanted to ensure the quality of their garments would be worthy of their name.

The company came to the fore again when British and American troops needed kitting out for the Second World War, and this tradition continued until the 1970s, which is when the company really came into its own.

In the early 1970s, Leeds United were the biggest football club in England.

After years of wearing an unbranded kit, manager Don Revie brought Admiral aboard to design the away kit and tracksuit (not the home kit at first), and it totally changed supporters’ outlooks on what a football shirt should be.

Leeds were the pioneers — the first club in England to wear a branded kit. The notion that a shirt could have pointed instead of rounded collars, short as well as long sleeves and different materials was groundbreaking at the time.

Revie also had Admiral make the England kits from 1974 onwards when he took the national team job, and the simple new design of a white shirt with one red and one blue stripe down each arm became the first commercially available shirt in the country.

On October 30, 1974, the England team wore a branded Admiral shirt for the first time against Czechoslovakia, and the make quickly gained in popularity. So did their client base. They really were at the top of their game.

Manchester United were the next to be decked out top to toe, with West Ham United, Sheffield United, Norwich City, Leicester City, Tottenham Hotspur, and more all following suit.

It was around this time, 1976-77, that sales of replica kits really took off. Admiral was cottoning on to the knowledge that supporters, particularly children, wanted to wear the shirts of their heroes.

Most other brands weren’t brave enough to take the style risks that Admiral appeared happy to, and with that risk came reward.

The 1976 English FA Cup final had both sides — Man United and Southampton — resplendent in Admiral kits and tracksuits.

United’s tracksuit top featured a distinctive stripe on each side that ran from the bottom of the shirt, up to the chest area, before arching away down the length of either arm.

That particular design became one of their best loved — unless you were a Coventry City fan. Their chocolate brown kit (yes, really) should never have passed go, but the same shouldn’t be said for the magnificent Wales and Belgium variants. Even Leyton Orient’s ‘braces’ version was more than passable.

Perhaps Admiral’s most memorable foray was the England kits worn at the 1982 World Cup. They remain iconic today and have stood the test of time. Simplicity is genius and all that.

What’s remarkable is that despite being up against some real sportswear heavyweights such as adidas, Admiral more than held their own in the UK during that period, with virtually every top side wearing their designs. Imagine that today!

By 1978, the brand had even made its way to the United States, as it struck deals with several popular NASL teams.

However, a decision not to move with the times would hurt them. Getting to the top is tough but staying there is tougher, and clearly the powers that be at the company weren’t listening to what clubs and consumers wanted.

As tastes began to change in the early 1980s and shirts that had a silkier feel became de rigueur, the company fell off of the end of a cliff. Their scratchy, starchy, less breathable shirts were quickly cast aside.

Admiral had stood still, preferring to believe their winning formula would always stand them in good stead. It didn’t.

They wouldn’t dip their toes back in the water until the beginning of the Premier League era in 1992 with old friends Leeds, but aside from briefly popping up here and there — including at Leeds again in 2005-06 — their popularity has waned to such an extent, that you’ll be hard pressed to find any major professional clubs that wear their kits today.

The company is still trading, but the kings have very definitely lost their crown. 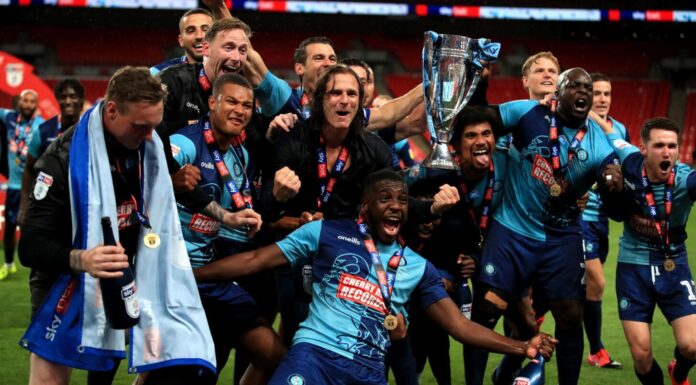