Now 26 years old, MLS has come a long way from its “just trying to survive” early days. But while the league has built beautiful soccer-specific stadiums and amassed healthy crowds, MLS is in constant change in the form of a continued search for identity and improvement. In recent years as MLS tries to appeal to a bigger sports audience, the tweaking of club names and complete overhaul of team images have left the league in a place it never thought it’d be…plain.

When MLS announced itself to the world in October 1995 at New York City’s Palladium Nightclub, it raised a few eyebrows to say the least. The fledgling league introduced 10 teams that would make up the initial group of clubs to compete in the rebirth of professional soccer in the United States. The names of those clubs couldn’t have been less soccer — or more American. The Kansas City Wiz, Dallas Burn, Tampa Bay Mutiny, San Jose Clash, and the clunky New York/New Jersey MetroStars were just some of the eye-raising names chosen to bring the world’s game to the States. 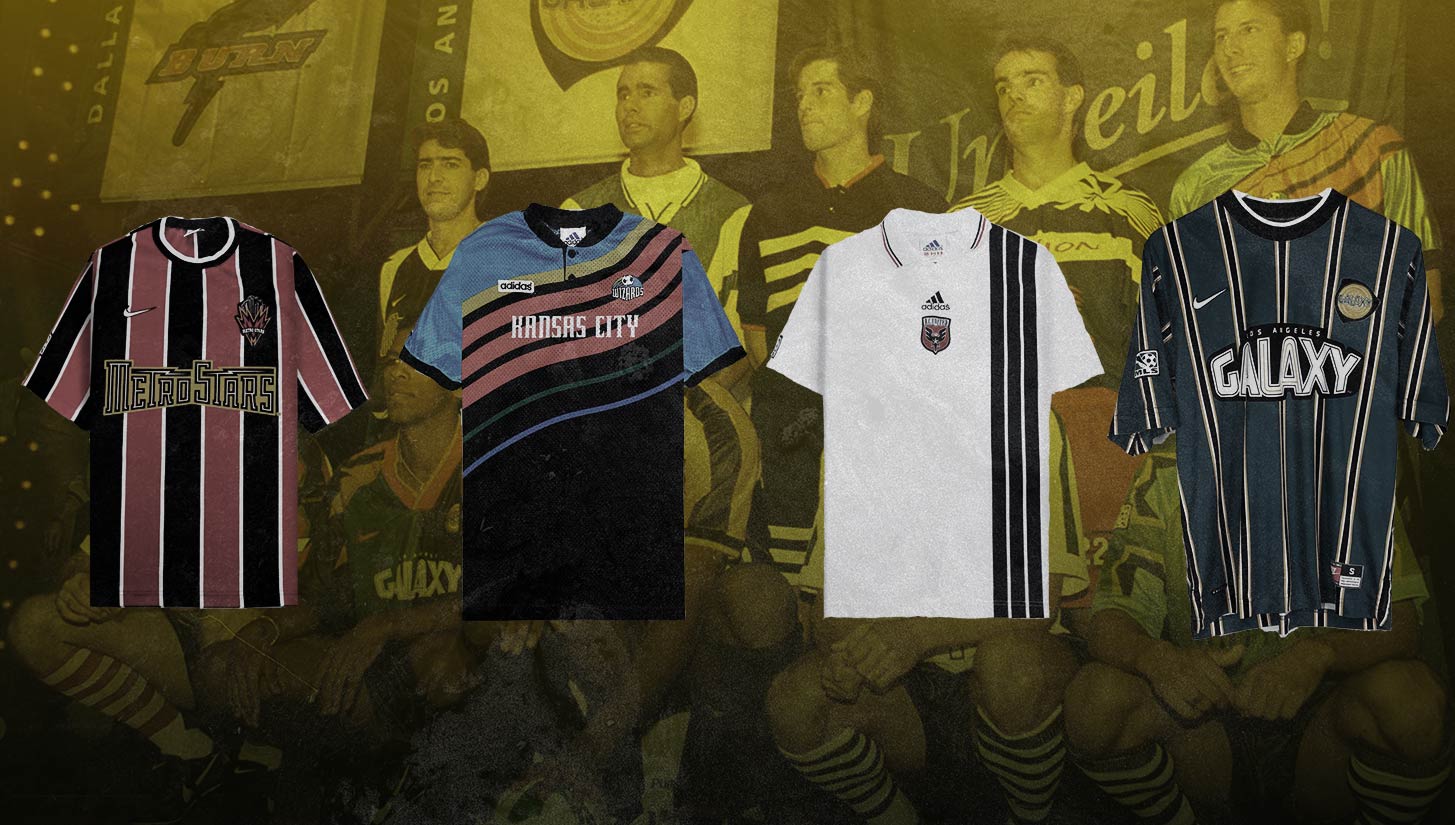 As for the jerseys, well, let’s just say it was 1996, and the U.S. was in a sort of skater culture fad. Lime green, yellow and bright sky blue, and bright red with a flaming horse were splattered all over some of the jerseys that looked more suited for the X Games than a soccer match.

In retrospect, while it was great to have soccer back as a professional sport in the U.S., it was clear that the league marketed itself to a yuppie culture — none of the teams presented a look or a style that could appeal to an inner-city soccer fan. Of the 10 original teams, only one had a “soccer name,” DC United.

Fast forward 26 years and MLS is still tweaking and changing. The quest to continue to be accepted is now geared towards a traditional soccer fan. Gone are the bright color patterns, and the league has overused team names that start with a city and ends either in United, Soccer/Football Club, or some other Euro-influenced name. Few teams have an American style sports name, and if they do, many of them were around before MLS even existed. Today it’s not uncommon to see an MLS game where the team in white is playing the team in dark blue, both are named FC, and it takes a bit to figure out what city they represent. MLS is now in danger of becoming what it has never wanted to be — a plain, dull league.

Of the five teams mentioned above, each one changed its name and rebranded with the exception of the Tampa Bay Mutiny, which folded in 2002. MLS and its owners wisely began tweaking and changing some of the zany ideas of the league’s early years to be in line with traditional soccer. And for the most part, the early rebrands of MLS teams were highly successful. Kansas City Wiz became Sporting Kansas City, and a new local ownership group would go on to build Children’s Mercy Park, a 19,000-seat soccer-specific stadium. With the new grounds and ownership came a club culture that revitalized a team that was drawing 4,000 fans to Arrowhead Stadium when it was sold. Today, Sporting KC plays to sellout crowds regularly.

The Los Angeles Galaxy, the league’s most successful team, had a unique look and crest when the team launched in 1996. When David Beckham shocked the world and announced he had signed a four-year deal with MLS in 2007, the club prepared itself to receive the game’s most popular star at the time. Out was the animated American logo, and in was the more traditional-looking soccer shield.

The change worked — the Galaxy looked elegant in their white kits and sellout crowds. The club itself was always a league leader in attendance in MLS, but Beckham’s arrival catapulted the team to a global audience and would eventually lead them to become the league’s most winningest team with five championships.

Other rebrands were a bit more hit and miss, however. The NY/NJ MetroStars were supposed to be the second coming of the New York Cosmos, but the team had a miserable first five years of existence. As fan interest dwindled, the club changed its crest in 2003 to a forgettable logo that did little to interest the New York sports scene. When Red Bull GmbH took over the club in 2006, not much was made of the new Red Bull New York name, nonetheless Red Bull built one of the best soccer stadiums in the country and has fielded some very competitive teams.

The Dallas Burn became FC Dallas to the interest of few, and the Houston Dynamo were originally going to be called Houston 1836, a strange attempt to go German with the team’s name, only to have a public relations nightmare and adjust the team’s name to Houston Dynamo, who this year changed their logo and added FC to the name.

As the league began to expand into cities that had established soccer communities, the league heads and new owners wisely stuck to their roots. The Portland Timbers and Seattle Sounders are the best examples of that — teams that were around before MLS that had an established fanbase that was retooled to become Major League. The genuine fan culture of these teams makes them the best supported clubs in the league.

The San Jose Clash would rebrand to the old San Jose Earthquakes name, and while a small market club, are well supported. The Vancouver Whitecaps and Montreal Impact had established fan bases that continued to support the teams when they entered MLS. Almost across the board the retro phase of teams in MLS worked, but even then, changes would come.

The Montreal Impact recently rebranded to Club de Foot Montréal, and their unique and European style crest made way to a black and dull snowflake design. Club owner Joey Saputo stated, “It’s hard to let go of things you love. But here’s the reality — to make an impact, we need to retire the Impact.” Diehard fans have remarked that a change in crest was not needed, but rather a change in team performance was.

Enter the SC, FC, and Uniteds of MLS

In an effort to play it safe and appeal to the traditionalist, many new teams that have entered the league in recent years have been creative with their branding, but not so much with their names. Austin FC, Atlanta United FC, Minnesota United FC, LAFC, Nashville SC, NYCFC, Orlando City SC, FC Cincinnati, and the eventual arrival of St. Louis City SC and Charlotte Football Club will give MLS a grand total of 15 teams that in some way, shape, or form have a city name followed by a version of United, SC, or FC in them. Gone are the Seattle Sounders and New England Revolutions of the world, and the Uniteds and SCs have taken over MLS.

In addition, Sporting Kansas City, Inter Miami CF, and CF Montreal all have European-inspired names that aren’t necessarily the most creative, and in the case of Miami, can be quite confusing. 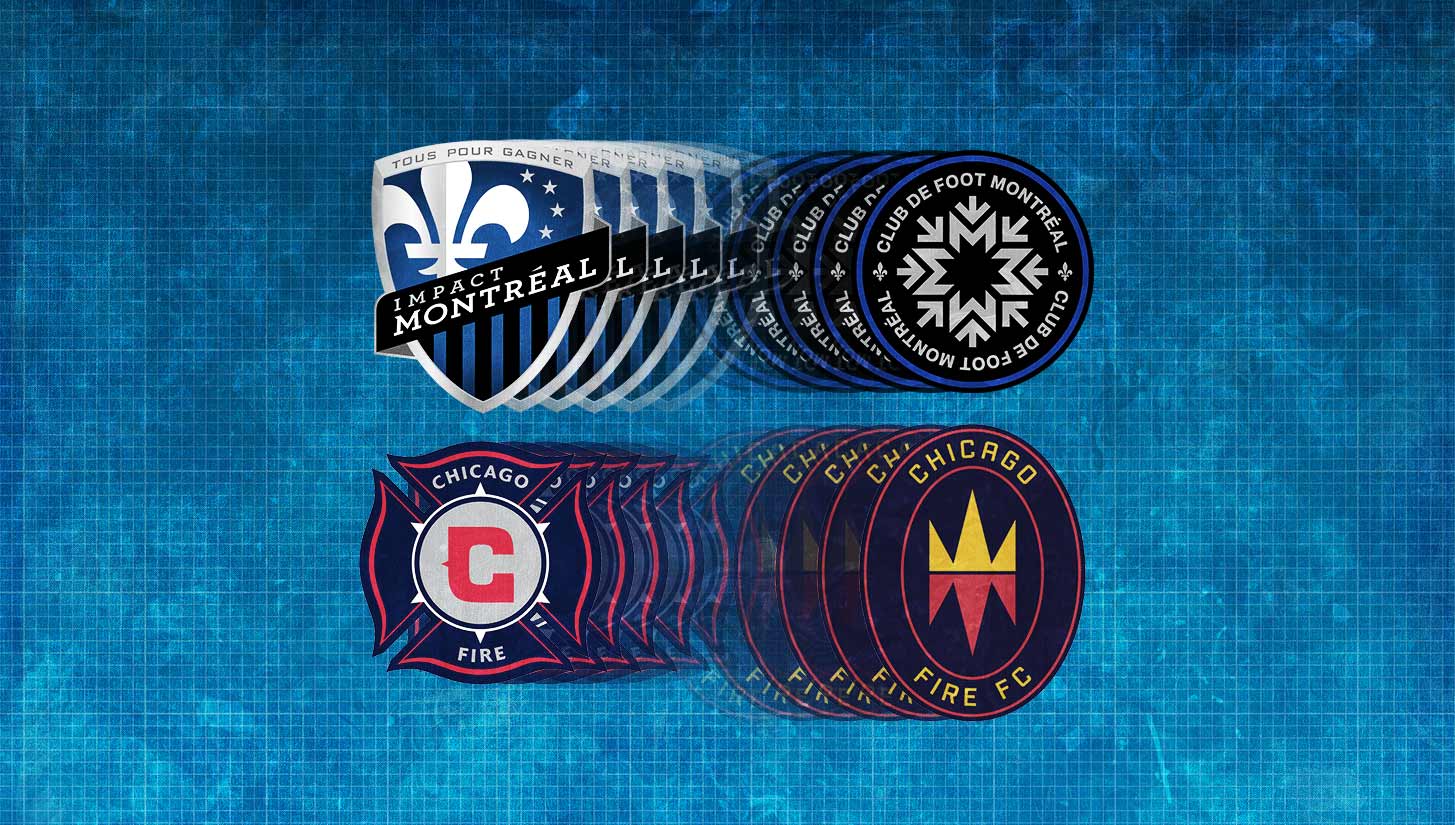 After years of underperforming and relocating back to Soldier Field, the Chicago Fire rebranded their traditional fire house logo to a simpler oval look. When the rebrand leaked on social media, the response was overwhelmingly negative — so much so, the club, who did not ask fans to participate in the rebrand, have stated that a new logo was in the works, with fan participation.

The Columbus Crew recently rebranded by dropping the Crew name, although, again when the crest leaked on social media it was universally panned. A makeshift change at the last minute reinstated the Crew name, but the giant “C” logo looks terribly out of place with the rest of the teams in the league. Again, as in the case of the Fire, there was a major disconnect between club ownership and its fanbase, which is especially concerning since it was a fan movement that kept the team in Columbus when it looked like the club was in danger of being moved to Austin, Texas.

While MLS is overrun by teams with virtually the same name, no one can question the success of Atlanta United, a team whose name is anything but creative yet whose production and mentality is among the best in the country. Atlanta United is one of the highest attended soccer teams in the world, and their quest for championships and attacking style of play have made the club a golden standard of MLS in just five years of existence.

Austin FC, through the aid of some young signings, a beautiful stadium, and Matthew McConaughey, have established a presence that FC Dallas and Houston Dynamo can only dream of. LAFC can be added into that mix as well — a who’s who ownership group and great signings like Carlos Vela and Diego Rossi are giving the five-time MLS Cup winners LA Galaxy a run for their money when it comes to notoriety in Los Angeles.

Then there is the New England Revolution, a club that started back in 1996. They have never changed their crest, never built a soccer stadium, and like many teams in MLS, have had up and down seasons. Since Bruce Arena took over the team in 2019, on the field the Revs have had a resurgence, and off the field, until the pandemic hit, was starting to bring back the fans it lost.  Increasing the point, it’s not about how you look or what you call yourself, fans will flock to see a winner.

As MLS travels its road to 30 teams, the league will go through a new television deal, an expanded World Cup in 2026 that will take place in the United States, Mexico, and Canada, and begin most likely its next phase that all professional leagues go through eventually — moving teams that don’t work. Many teams run the risk of moving eventually if their presence does not increase, as evident with the Columbus Crew, who almost became victims of poor revenue and small local presence.

One thing remains clear, MLS is still a young league searching for the right formula. The league and teams in many cases have been able to crack good marketing, star power, and relevance in certain markets. Atlanta United and Austin FC are in a much different place than the New York Red Bulls and FC Dallas. As a whole, MLS and its fans need to realize that as time goes on, and when MLS cracks the formula of great attendance with excellent TV ratings, many teams will either be along for the ride, others may rebrand yet again, or others may relocate. Nothing is more American than fans wanting to watch stars and winners. For now however, when United plays FC hopefully it is the red and black stripes of Atlanta against the green and black of Austin. Please no more whites against blues, fans are tired of the plain. 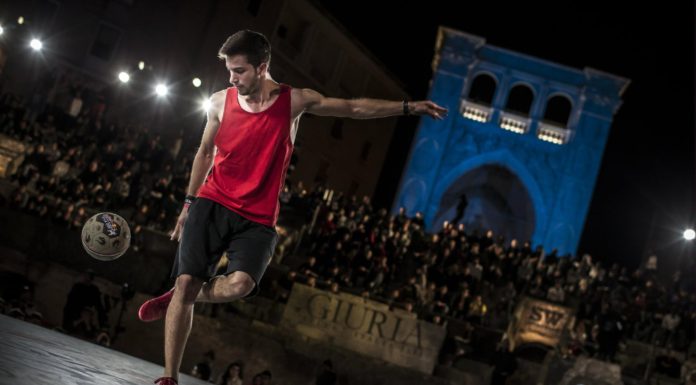