A few days removed from Shakira’s scathing diss track of her ex-partner Gerard Pique, we break down the song and see where the pieces lie after the fallout.

One could have been forgiven for identifying this horrific gaffe in Barcelona’s penultimate Champions League group game at Camp Nou as the lowest ebb of Gerard Piqué’s 2022-23 campaign:

There are also the declines in both on-pitch form and standing within the squad that led Piqué — a La Masia-raised talisman, grandson of a former Barça board member and presumptive future club president — to pull the plug on what could have been a farewell campaign roughly a third of the way through its completion.

Of course, one should also point out that the blunder against Inter only came to pass because Piqué, 35 years of age and arguably no higher than the club’s sixth-choice center back, was pressed into action after a wave of injuries on the back line, namely to Ronald Araújo and Jules Koundé. However reasonable the explanations for Piqué’s decline, and however cruelly his lack of fitness at the game’s highest level was revealed, the underlying message was unambiguous, emphatic, and bore down on Piqué with alarming speed.

Unfortunately for the legendary center back, the typical “looking forward to spending more time with my family” retirement plan was simply not on the menu, as the sledding off the pitch in the preceding months had arguably been rockier than anything leading to his expedited departure from the sport.

A Power Couple No Longer 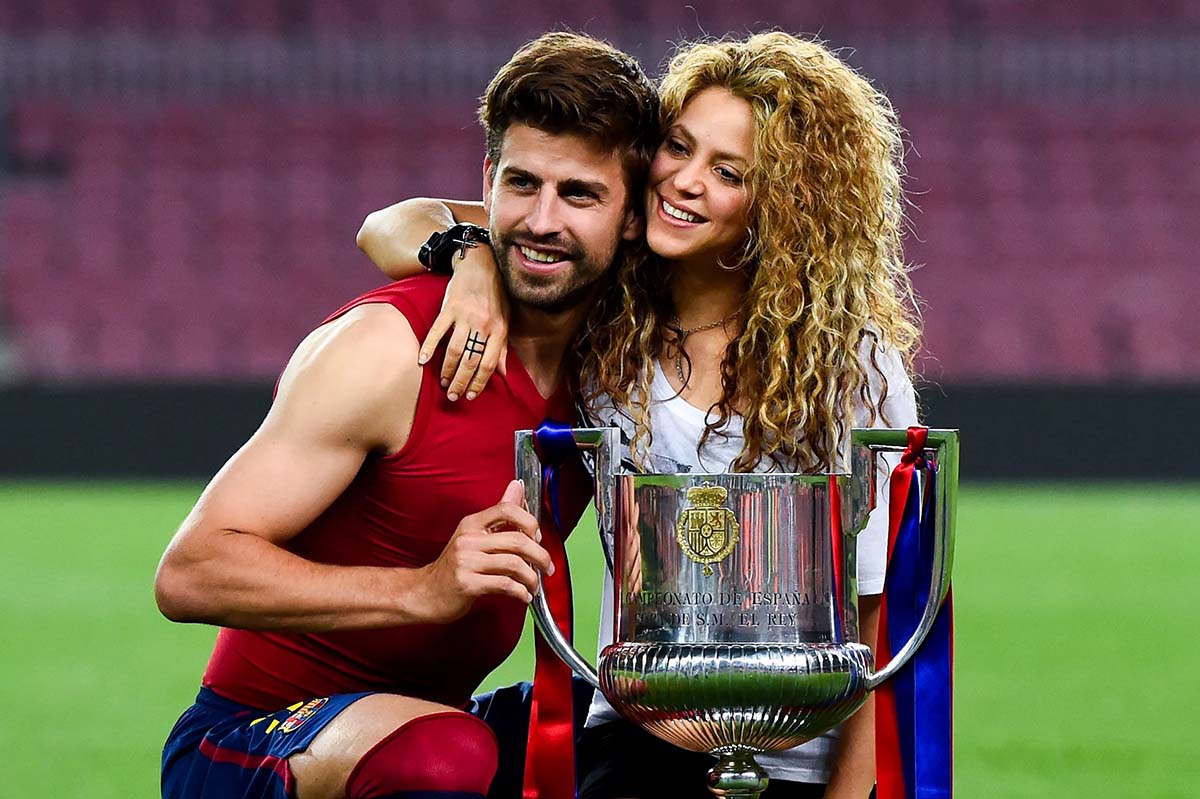 If you’re reading this, I’m probably safe in assuming that you are at the very least aware of the near-dozen-year relationship between Piqué and Colombian pop superstar Shakira. It’s possible, however, that you need a bit of refresher on the goings-on between Barça’s once-preeminent power couple.

The pair met ahead of the 2010 FIFA World Cup, when Piqué appeared in the video for the tournament’s official song, Shakira’s “Waka Waka (This Time for Africa).” The two officially became an item in 2011. Though they never married, they have two sons, and for much of the past decade, by all appearances, the two had built a beautiful, happy family.

However, in June 2022, amid rumors of infidelity on Piqué’s part, the couple released a joint statement confirming their separation. By that point, though, the bloom was already off the rose.

Even before the separation announcement, the seams in the relationship were beginning to rip. In late April 2022, Shakira released a song, “Te Felicito” (“I Congratulate You”). That track, made in collaboration with Puerto Rican singer-songwriter Rauw Alejandro, kicked off something of a revenge tour for Shakira, with lyrics including “I can’t stand two-faced people. I’d put my hands in the fire for you.”

Then, in October 2022, right around the time that Piqué reportedly began a new relationship with Clara Chía Martí, a 23-year-old event organizer at Kosmos Global Holding SL, a sports and entertainment content company in which Piqué is invested and prominently involved, Shakira was back on the mic. This track, “Monotonía,” a collaboration with another Puerto Rican artist, Ozuna, is a raw accounting of her heartbreak.

But the biggest blow was yet to land. Starting off 2023 with a bang, award-winning Argentine DJ and producer Gonzalo Julián Conde, known professionally as Bizarrap, tweeted a link to a YouTube video for “BZRP Music Session #53” just after 1:00 a.m. Central European Time on January 12.

Shakira’s first release of the year turns the grief and wistfulness of her previous release “Monotonía” into defiance and searing anger.

This new song, if not in the violence of its lyrics, then certainly in the comprehensiveness of its takedown, is a first-ballot inductee into the Diss Track Hall of Fame, alongside Tupac Shakur’s “Hit ‘Em Up,” Nas’ “Ether,” and Jay-Z’s “Takeover.”

Whether fueled by sadness at the thought of the family’s upcoming birthdays — their sons will turn 8 and 10 years old later this month and both Shakira and Piqué were born on February 2 — or simply the product of the simmering resentment of someone who feels not only wronged but embarrassed in the process, “BZRP Music Session #53” does not pull a single punch in its Festivus-esque airing of all grievances.

Sticks and Stones and… Maybe These Words?

There’s basically not a syllable in this song that doesn’t go hard. But let’s sift through some of the particularly bloody carnage.

The recurring motif in the song, Shakira refers to her eighth studio album She Wolf to proclaim that not only does she demand a partner with a stature equal to hers, but that she is also built to make it on her own.

Apparently the couple’s home in Esplugues de Llobregat, a neighborhood just outside of Barcelona, is located next door to that of Piqué’s mother, who allegedly asked Shakira to publicly deny Piqué’s infidelity [of which she was aware] and blamed the singer for being too busy in her career.

To everyone that doesn't know, Shakira's mother in law asked Shakira to admit to the press that her son didn't cheat, she didn't like her long hair so she made her cut it short, also blamed shakira for being too busy in her career and knew about his son cheating and accepted it.

Thus the witch on the balcony and this diss track on a loop.

In 2021, Shakira was among the celebrities identified in the Pandora Papers using offshore companies to hide wealth and avoid taxes. From 2015 on, Shakira lived with Piqué in Barcelona. However, according to a long-running (and ongoing) case involving Shakira and the Spanish tax authorities, the singer is alleged to have evaded €14.5 million in taxes between 2012 and 2014, by claiming she lived in the Bahamas and thus didn’t qualify as a Spanish resident for tax purposes. Shakira, meanwhile, claims that she did not “live stably” (183+ days per year) in the country until 2015, at which point she paid €17.2 million in taxes.

Last September, however, a judge ruled that the pop star must stand trial on the matter, with not only the aforementioned €14.5 million at stake but, more importantly, prosecutors’ requests for an additional fine of €23.8 million and more than eight years in prison.

Shakira, who has repeatedly claimed no wrongdoing, has previously promised to “invoice” Piqué for the matter. What’s unclear is whether this is for some outstanding payments to the treasury that remain, as compensation for some wrongdoing for which Piqué’s is responsible, or simply as revenge for his leaving her in the midst of it all.

These lines really speak for themselves. However, Piqué has been able to respond to them by showing up to work in a Renault Twingo, and signing a sponsorship deal with Casio for his Kings League 7-a-side league.

Ultimately, this is a story about a relationship in tatters, in which two young kids have had to watch (or, if they’re being protected from it now, will one day learn about) each of their parents publicly hurting and humiliating one another. If we’re being honest with ourselves, there’s only so much “winning” that’s going to be done here.

However, Shakira is neither backing off the message of “BZRP Music Session #53” nor the manner in which it was delivered, stating that the song offers a voice for “millions of women who rise up against those who make us feel insignificant.” She’s gotten no shortage of support, as the song now holds the record for the largest-ever debut on Spotify, and the initial post of the song on Instagram has now racked up more than 9.1 million likes.

Most notable among these “likers” from the world of football are newly-crowned World Cup winner Paolo Dybala, and Antonela Roccuzzo, wife of Dybala’s Argentina teammate, Lionel Messi. There’s no reason to question the sincerity of Roccuzzo’s support for Shakira, though her gesture may carry the added bonus of delivering a blow to Piqué, who was rumored, with various degrees of credibility, to be in conflict with the Argentine GOAT during Messi’s final seasons in Barcelona.

Also, beyond providing Shakira with “catharsis,” “BZRP Music Session #53” is proving to be pretty good business.

According to estimates from Spanish site Activos, in its first 24 hours, the track has racked up a whopping 45 million views between YouTube and Spotify (it has since eclipsed 140 million views on YouTube alone), and is well on its way to joining the rest of the so-called “separation trilogy” in some rarified air.

According to those same calculations, “Monotonía” has been viewed on the platforms some 158 million times in the three months since its release, and “Te Felicito” has been viewed some 440 million times since last April. Calculating based on the rather frugal rates paid by Spotify and YouTube, as of January 14, Activos estimates the “separation trilogy” had already racked up more than €21 million in revenue.

If all that isn’t enough, there’s still the prospect of Piqué having to watch his beloved Barça take the pitch in the near future wearing the logo of the now-flamethrower-wielding one-time love of his life.