With the club recently signing a record deal with Hummel, we take a look back at the best Everton kits from over the years, some of which are among the most underrated of all time.

One of England’s oldest football clubs, Everton’s 142-year existence has been filled with success. The Toffees have claimed nine top division titles in England, good for fourth-most all time, and the club has also seen some of the world’s best call it home — from Neville Southall to Wayne Rooney.

The club has also excelled via their kits. Whether it’s their iconic blue home or the ambitious efforts on their away and third shirts, Everton have some of the most memorable jerseys out of any Premier League club.

Though they may be most synonymous with Umbro, Toffee kits have gone through several brands including Nike, PUMA, and Le Coq Sportif. The club once again shifted manufacturers last month, trading Umbro’s diamond for Hummel’s chevron in a club-record three-year, £9 million deal. That figure may pale in comparison to the garish deals of Manchester United and neighboring Liverpool, but Everton instantly became Hummel’s most recognizable club, and we’re excited to see how the Danish brand can add to the Toffee’s vast kit history.

Hummel’s previous work with Forward Madison and Providence City FC alone speaks to their capabilities, and their infiltration of the Premier League will only put more people on game. As we wait for Everton to unveil their first Hummel kit, let’s go back into the club’s past to dig out their best ever jerseys. 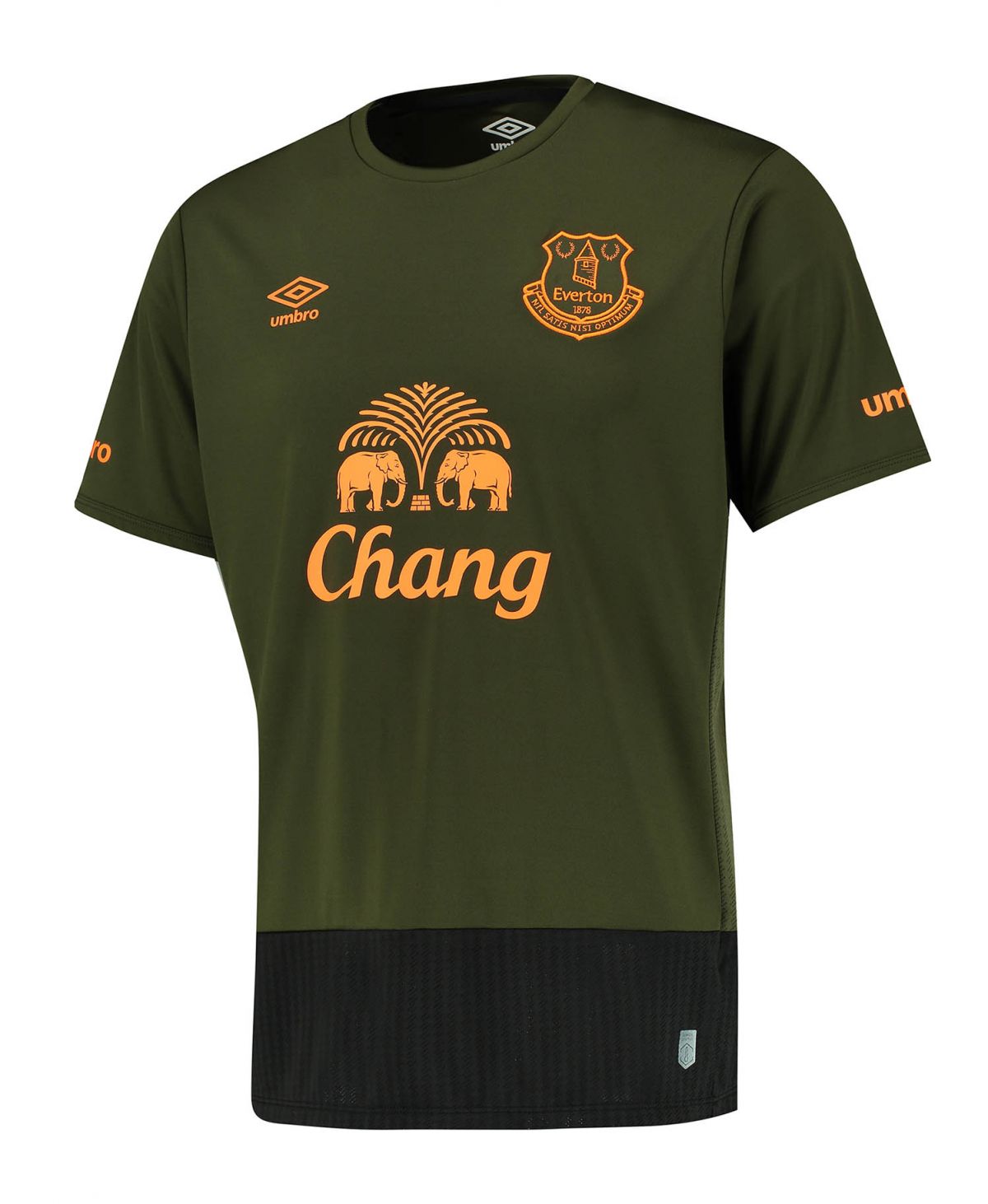 A polarizing kit to say the least, Everton’s 2015-16 third kit was a foray into a new color scheme that few, if any, teams have adopted. The club was no stranger to taking chances with their third and away shirts in the past, but for some, Everton and olive green were not a match. This kit aficionado was not a part of the dissent.

While the olive-orange combo isn’t a common one on the pitch, it’s a classic mix throughout fashion, seen in hunting and military-inspired apparel and of course, the UNDFTD x Air Jordan IV. Unsurprisingly it looks incredible on a football kit. To add to the fun, Everton partnered up with Marvel Comics artist and Toffee fan Wil Sliney to create a promotional poster as one-of-a-kind as the kits themselves. 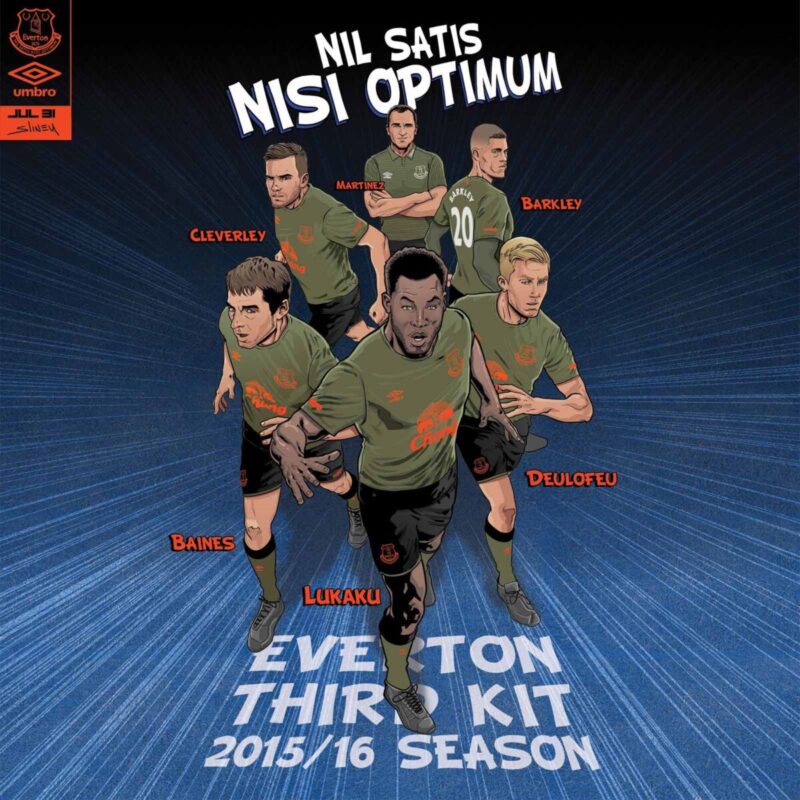 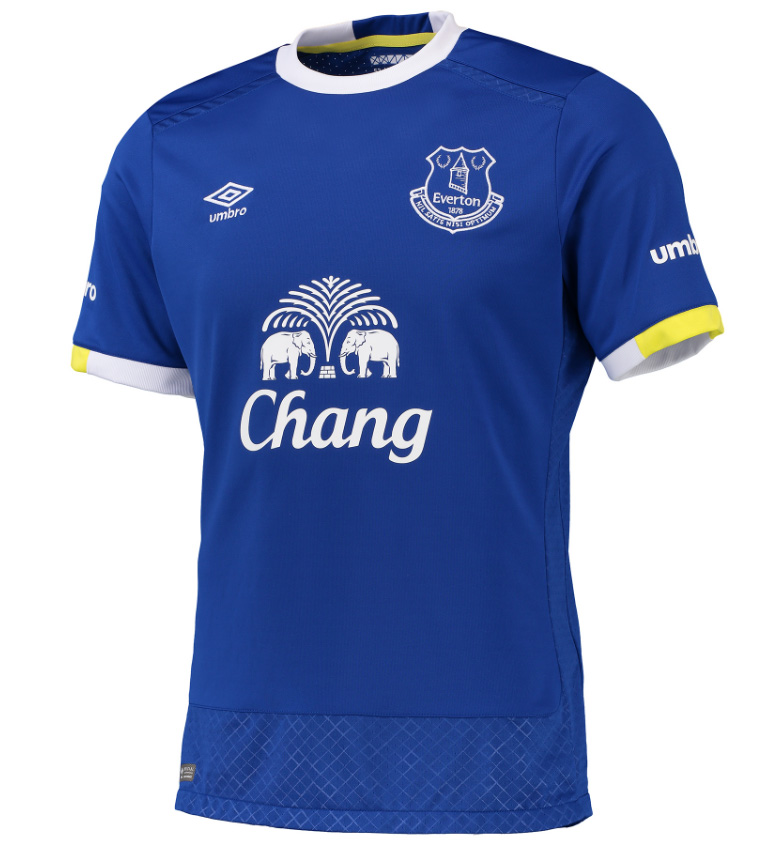 Before moving to Sport Pesa as their sponsor for the 2017-18 season, Everton had a long-standing partnership with Thai beer company Chang. From Carlsberg to Coors to Newcastle, it seems as if we get phenomenal results anytime a club uses a beer sponsor.

There were several beauties from the 13-year Chang era, but no home kit was better than the very last one. The round white neck paired with subtle yellow sleeve accents make the final installment truly one to remember. 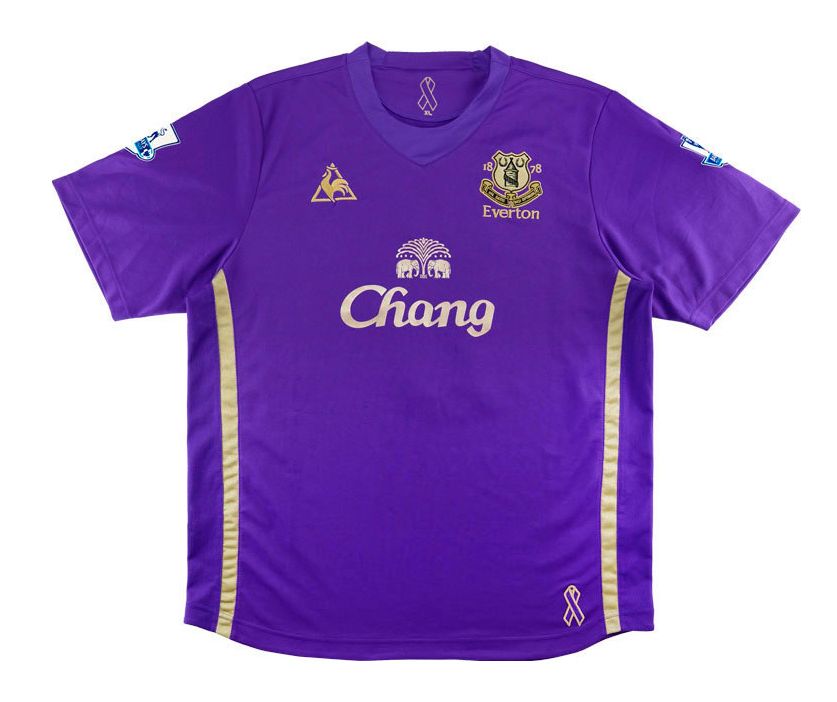 Another ambitious third shirt getup, the purple and gold 2009-10 offering from Everton is absolutely regal — and it benefitted a good cause too. Sales from the jersey went to Liverpool Unites, the kids’ charity of the Liverpool Echo newspaper. Inspired by the charity’s logo, the club dressed in purple for the first time in its history (they’ve since gone back to the shade twice).

It should be said that all three jerseys from that season are among the best Everton kits of all time, plus you get hipster points for rocking Le Coq Sportif. The French brand still has a handful of clubs it supplies, including Fiorentina and Saint-Etienne. They also recently partnered up with AS Velasca for a limited capsule of incredible shirts in late 2019.

Everton’s away kit from that year has become pretty iconic as well — we’re always accepting of a little pink on a kit as long as it’s done tastefully. Any other year and it might’ve cracked this list, but that third kit is absolutely magisterial. 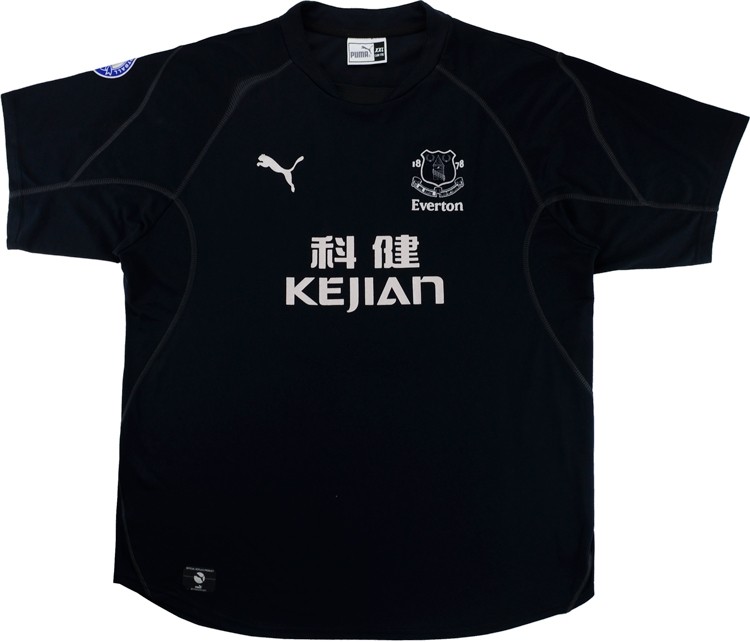 A black kit is never a bad look. Everton has done it well several times throughout its history, including in the 2012-13 and 2014-15 seasons, but the best of them all was from 2002-03. Perhaps the fact that Rooney donned the shirt adds to its mystique, but the overall sleekness and contrasting white accents are what put this shirt over the top. 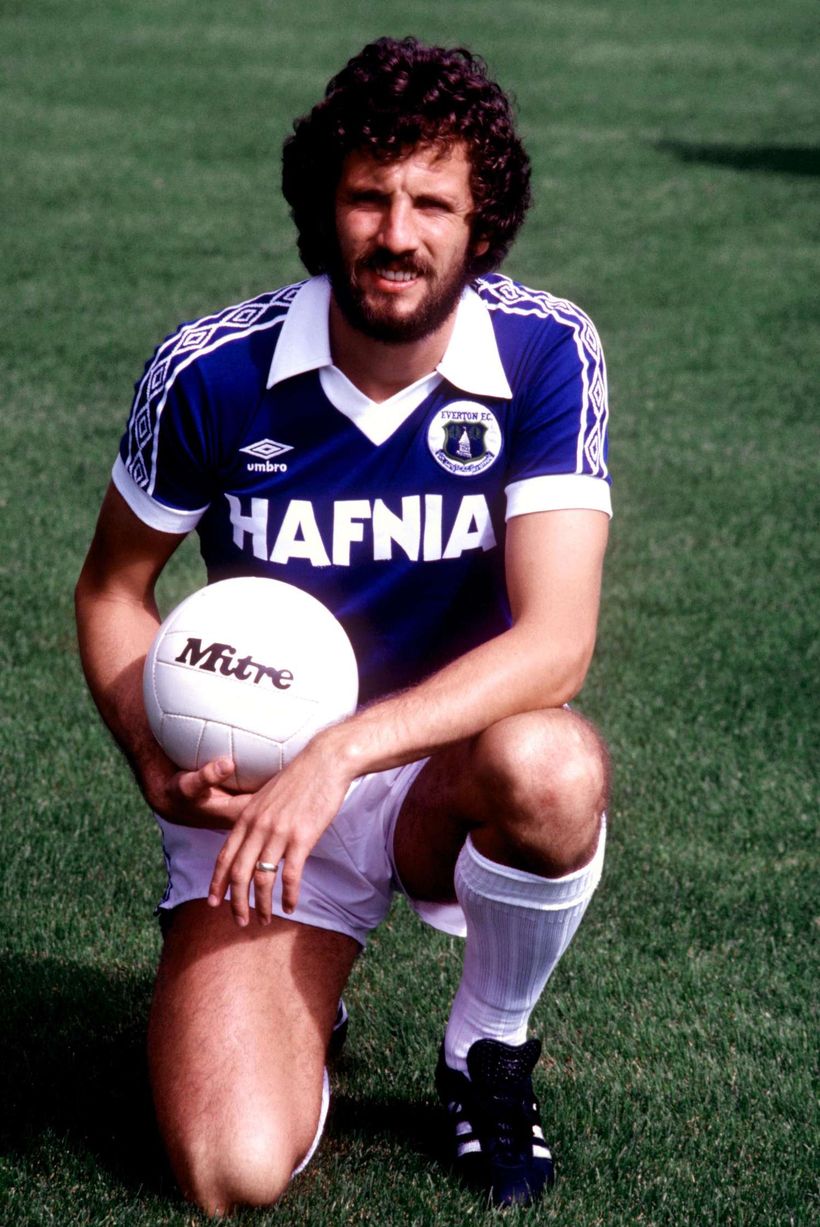 Now we’re getting into the all-time classic section. A true belter of a shirt, the ’81-82 home kit from Everton is everything we’ve come to love from classic kits. A wide polo collar, throwback crest, and best of all, the Umbro diamond sleeves. Umbro has brought back this design feature on some of their newer jerseys, and it’s truly a mark of beauty.

As phenomenal as these shirts are, the club curiously only kept them for one season in an era where it wasn’t odd to have the same jersey for three to four years. However, the switch somehow brought the team good fortune, as they went through their most successful run through the mid ’80s. 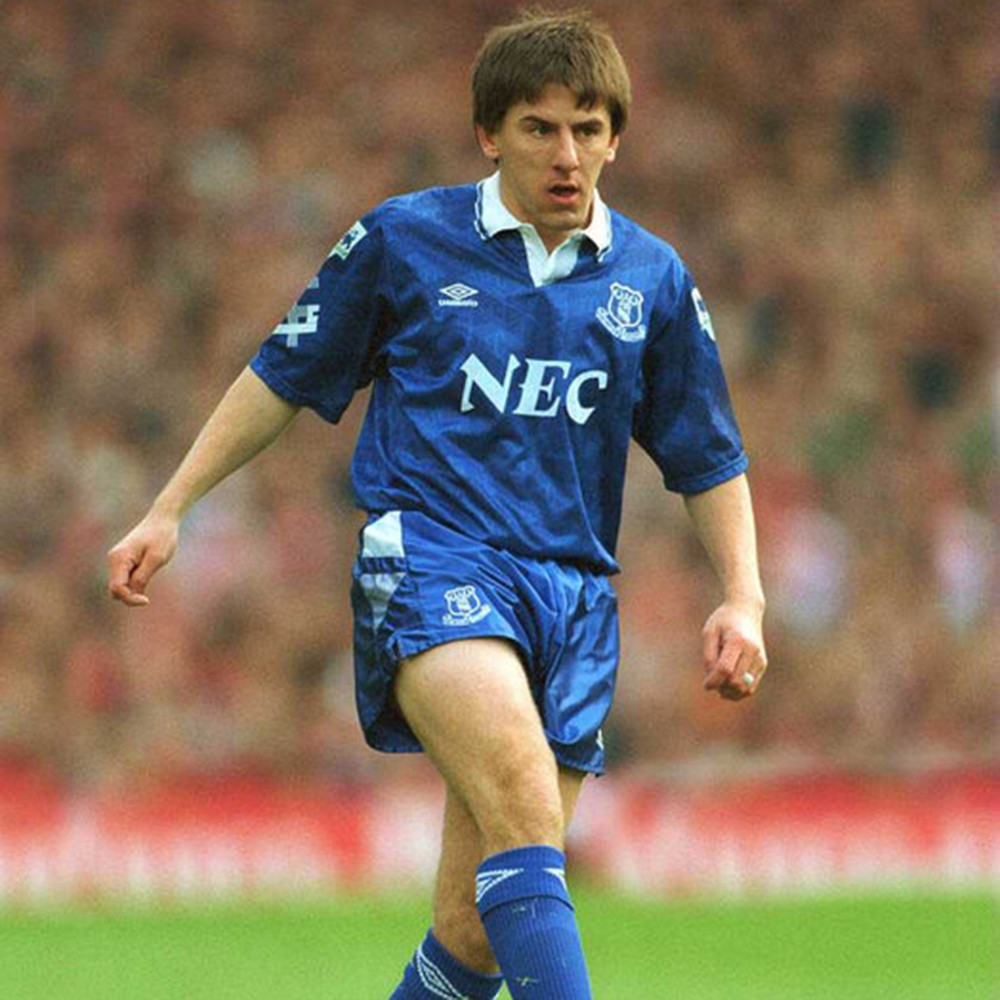 Could it have been any other? The club’s first shirt in the Premier League is truly their best. If you couldn’t tell, we’re huge fans of the polo collar, and that paired with the quintessential ’90s pattern and unmistakeable Umbro numbering/lettering make this an easy decision for the best Everton kit of all time.

What’s your favorite Everton kit? Let us know in the comments below. 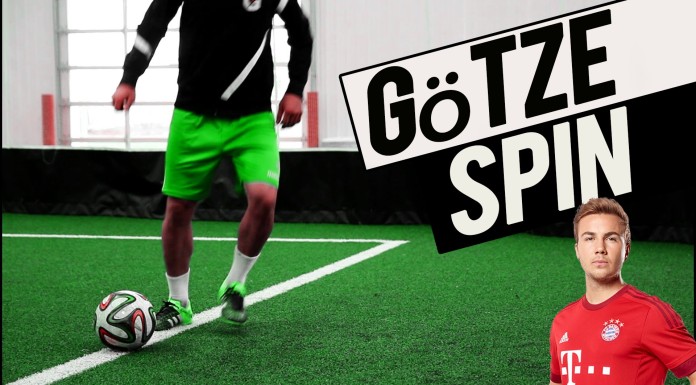