Coming to MLS this year, the hype behind Inter Miami CF is slowly bubbling from a simmer to a boil. We get an inside look at the trio of Inter Miami CF supporters’ groups that are looking to make Miami the new “Soccer City USA.”

When thinking of Miami, a few things come to mind: beautiful beaches, never-ending nightlife, and incredible food. And of course, who could forget its contributions to pop culture via Miami Vice and a rapping Will Smith. But that’s just South Beach. Fans of the beautiful game in Miami have a different story to tell. A story which shines a light on the cultural melting pot occupying the southernmost tip of the continental United States. 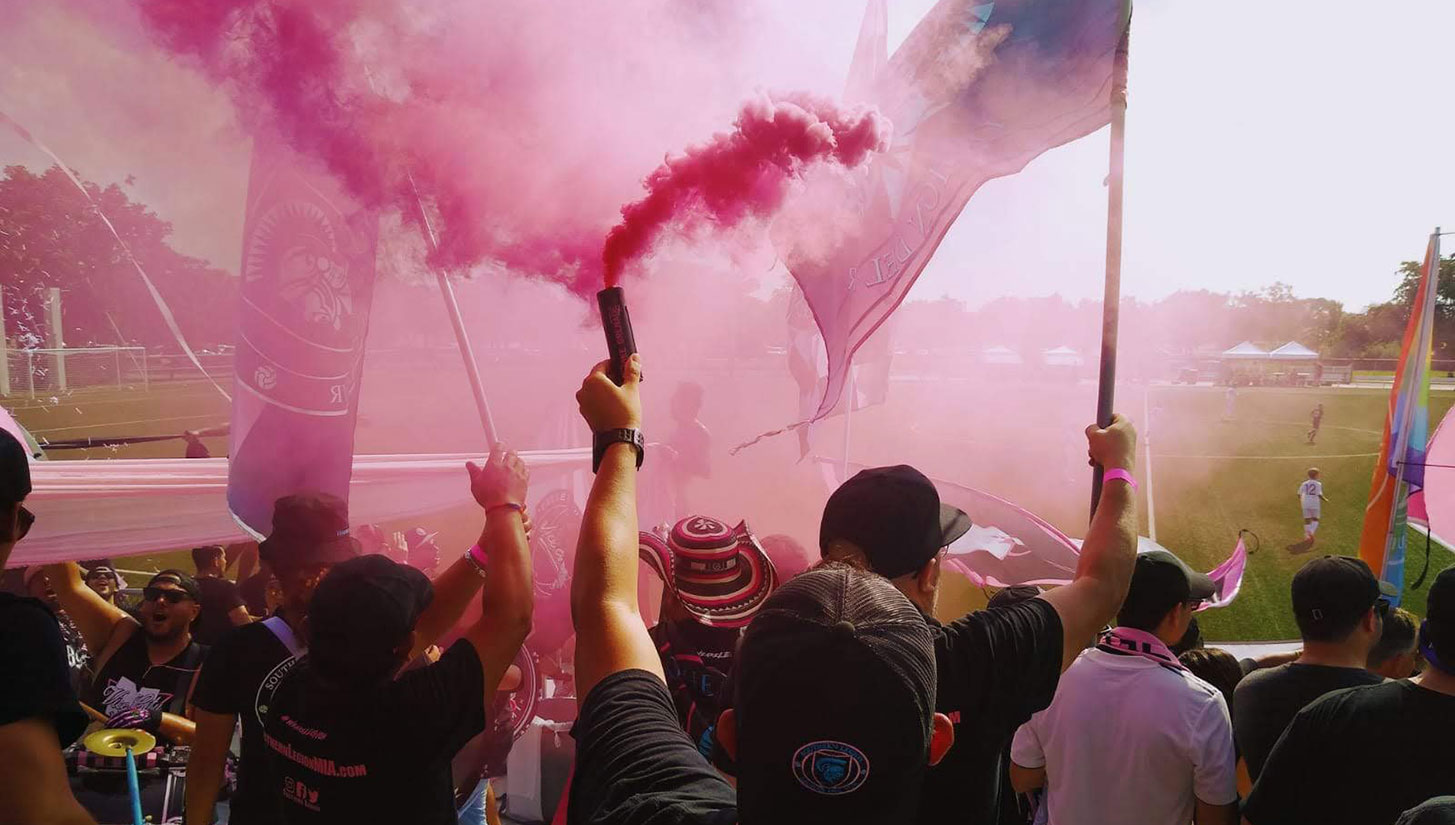 Miami’s soccer history really begins in the early ’70s, but for the purposes of this story we’ll begin in 1998. MLS, then a fledgling soccer league just two years into existence, added the Miami Fusion to its roster of teams. Buoyed by the past popularity of the Fort Lauderdale Strikers, the Fusion eked out an existence for four short years. When it became apparent that not even bringing in the legendary Ray Hudson as manager and star player Carlos Valderrama could increase revenue, the club folded in 2002.

With the team no longer existing, the independent supporters’ club, called The Afusionados, became nomadic. They began searching for a new club to support rather than simply laying dormant. For years it appeared The Afusionados were destined to roam the Earth without a home for the rest of eternity. But then, in 2013 MLS Commissioner Don Garber threw them a lifeline when he announced a new Miami MLS franchise. This is the story of how the Inter Miami CF supporters’ groups came to be. 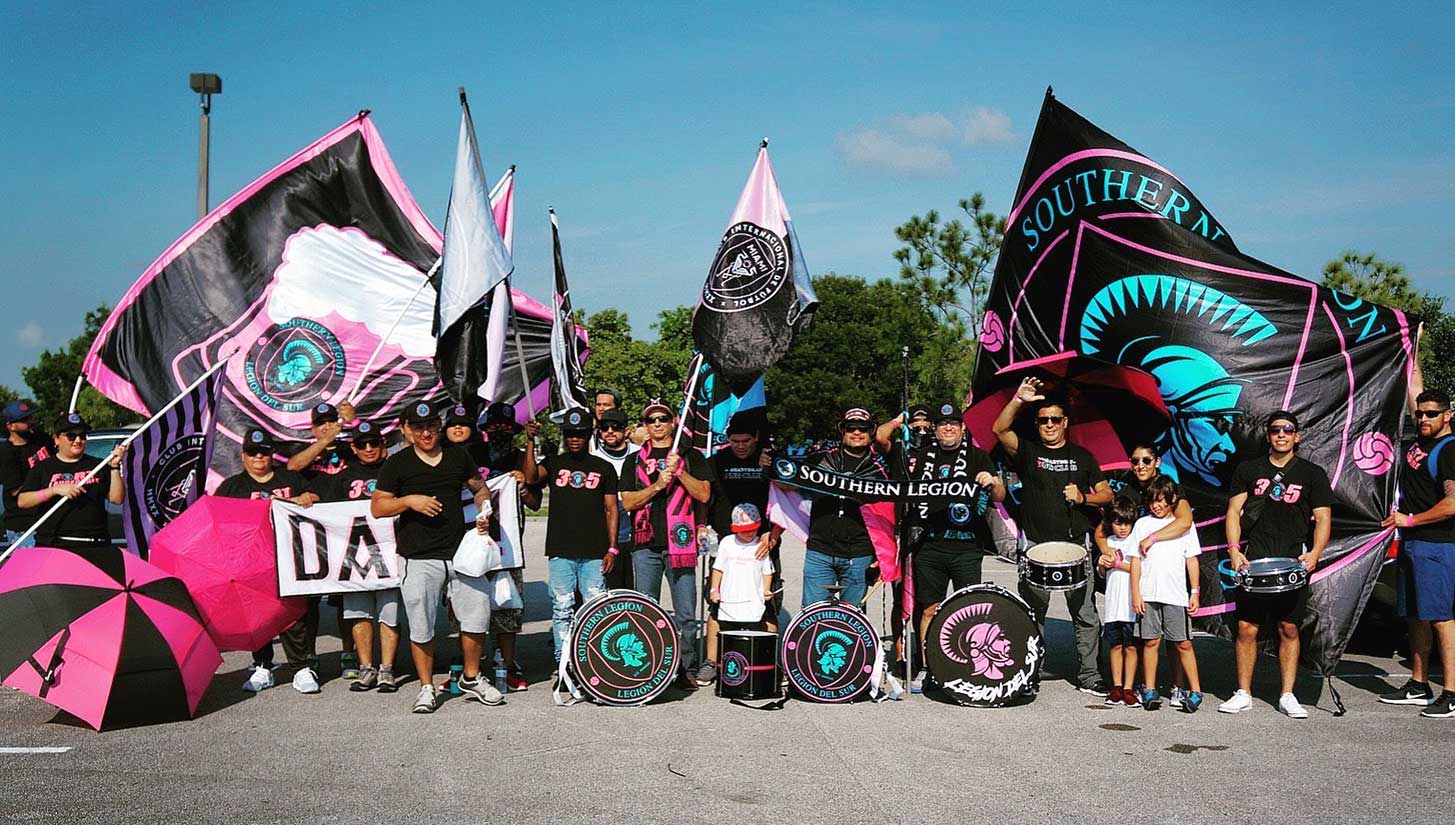 It all started with an aggressive email campaign by Afusionados holdovers to bring MLS back to Miami — we’re talking almost 2,000 emails flooding Garber’s inbox per week. The email blast prompted the commissioner to host an open house, where he met with the supporters to quell their pleas.

“He was like, ‘MLS Miami is happening, MLS Miami is in the plans, just stop the emails please,'” said Marco Galarza, who’s part of the Southern Legion leadership team. “So we had to leave Don Garber alone. The next time that we talked to him was when they announced it.” 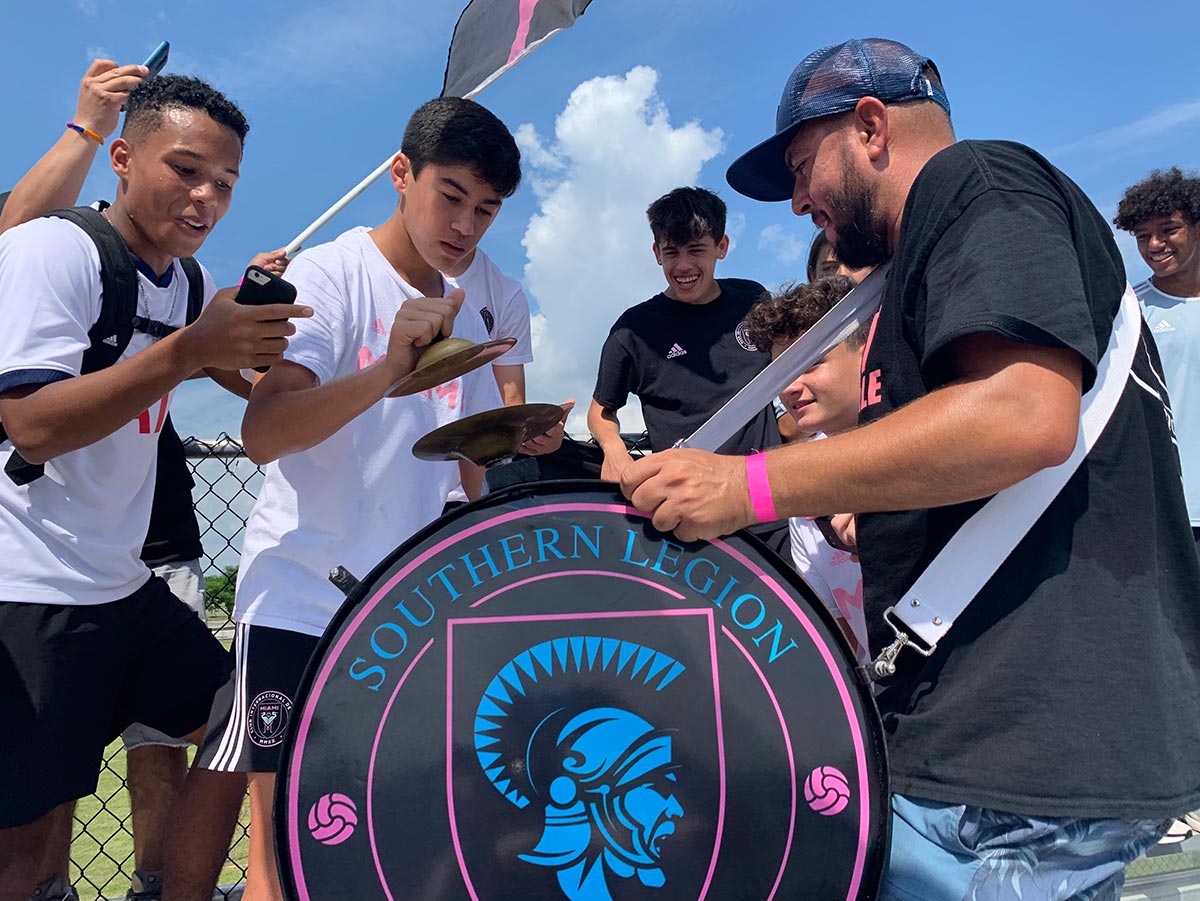 With the new Miami team officially confirmed, the supporters went to work trying to put the band back together. The Afusionados holdovers, who had briefly re-branded as the Miami Ultras, then came up with the Southern Legion moniker. Southern obviously alludes to Miami being the southernmost major metro area in the U.S., and Legion stems from the fact that it took a big group of warriors fighting to get their MLS team back.

The Southern Legion logo pays homage to both the supporters’ club’s and Miami’s heritage. Its black, blue, and hot pink color scheme elicits Vice City vibes. The heart of the logo is a Legionnaire with the year 2013 — the year the group was founded — in Roman numerals, all centered on a three-point press representing the tri-county area of South Florida: West Palm Beach, Broward, and Miami-Dade.

“The idea behind the logo is that we can really blend into the identity of Miami,” explained Galarza. “In Miami every corner, every neighborhood is different. It’s that big blend of culture, and in soccer every pitch that you go to, you play differently. There’s no one way of playing soccer Miami style. The Miami style’s like any style.” 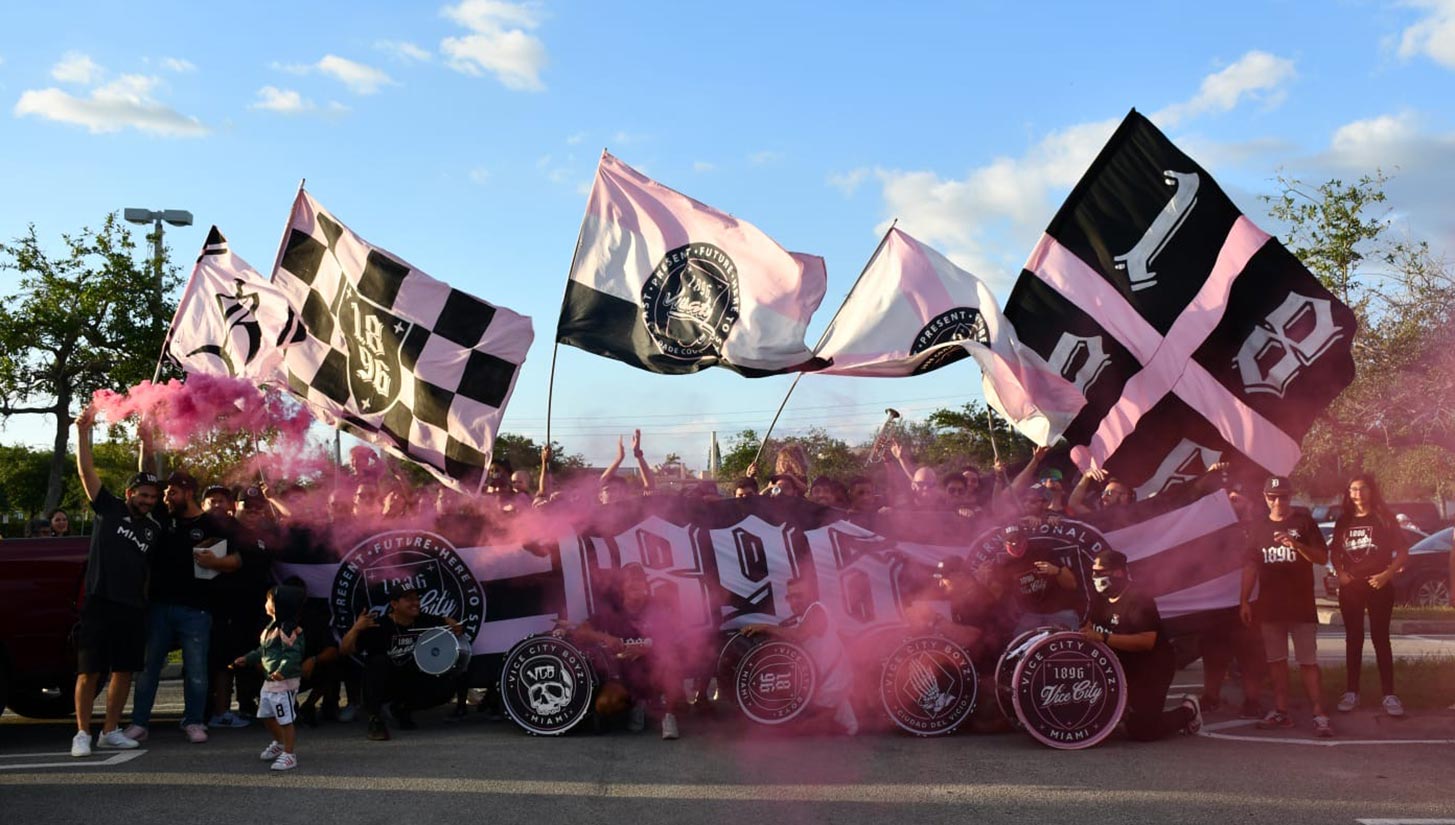 Following a conflict in leadership with Southern Legion, two factions broke off to form their own groups between 2018 and 2019. The first was Vice City 1896, and they made their grand entrance at the Miami Freedom Park referendum on November 6, 2018.

“There was a huge event, David [Beckham] was there, and we were at a park about five blocks away,” said Chris Moramarco, one of the five founders of Vice City 1986. “Very Game of Thrones style, we waited there until the event started, and then we marched in, catching the attention of the media and club owners. So much so that they requested to speak to us at a later date.” 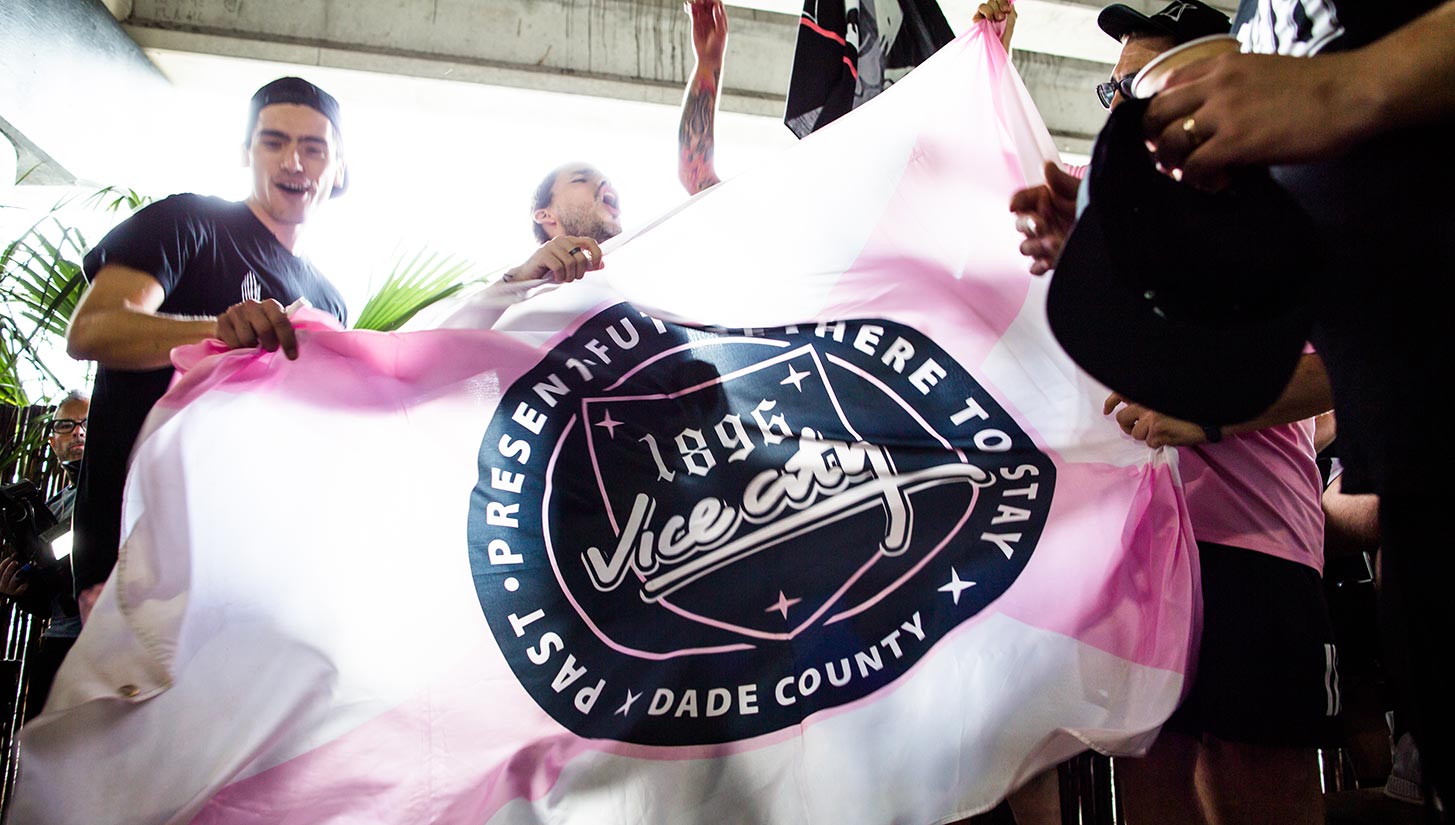 Vice City 1896’s strategic entrance that day set the tone for what their supporters’ group is all about. Its leadership, many of whom were also involved with The Afusionados back in the day, bring a distinct Latin American flavor to supporting the club. 1896 is Miami’s founding year, and Vice City of course refers to Miami Vice and the “Grand Theft Auto: Vice City” edition of the popular video game series.

Like Southern Legion, Vice City’s color scheme tells a story of Miami from the supporters’ point of view. The contrasting bright pink and jet black represent the two sides of Miami — the electric, non-stop party everyone is used to seeing, and the darker, grittier landscape that the group likes to call the city’s “B” side. 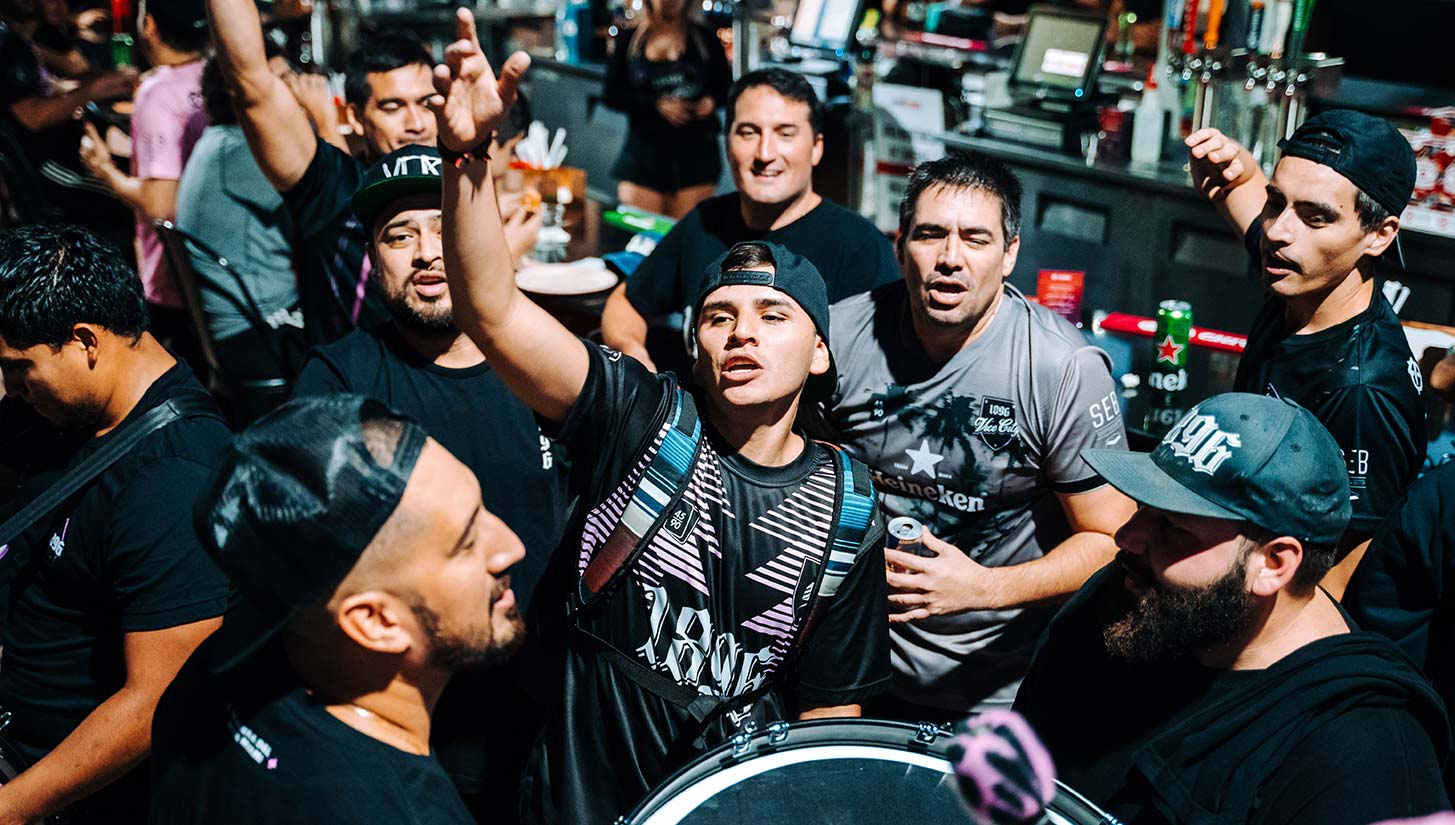 “There’s another side to Miami, which is the hard-working class,” explained Moramarco. “The migrants that have come here and looked for a better future. And then all the cultures that make that unique too. I mean there’s a lot that you don’t see at first sight when you come to Miami.”

The heart of the logo has Vice City 1896 written in cursive script, similarly centered on a three-point press representing the tri-county area of South Florida. 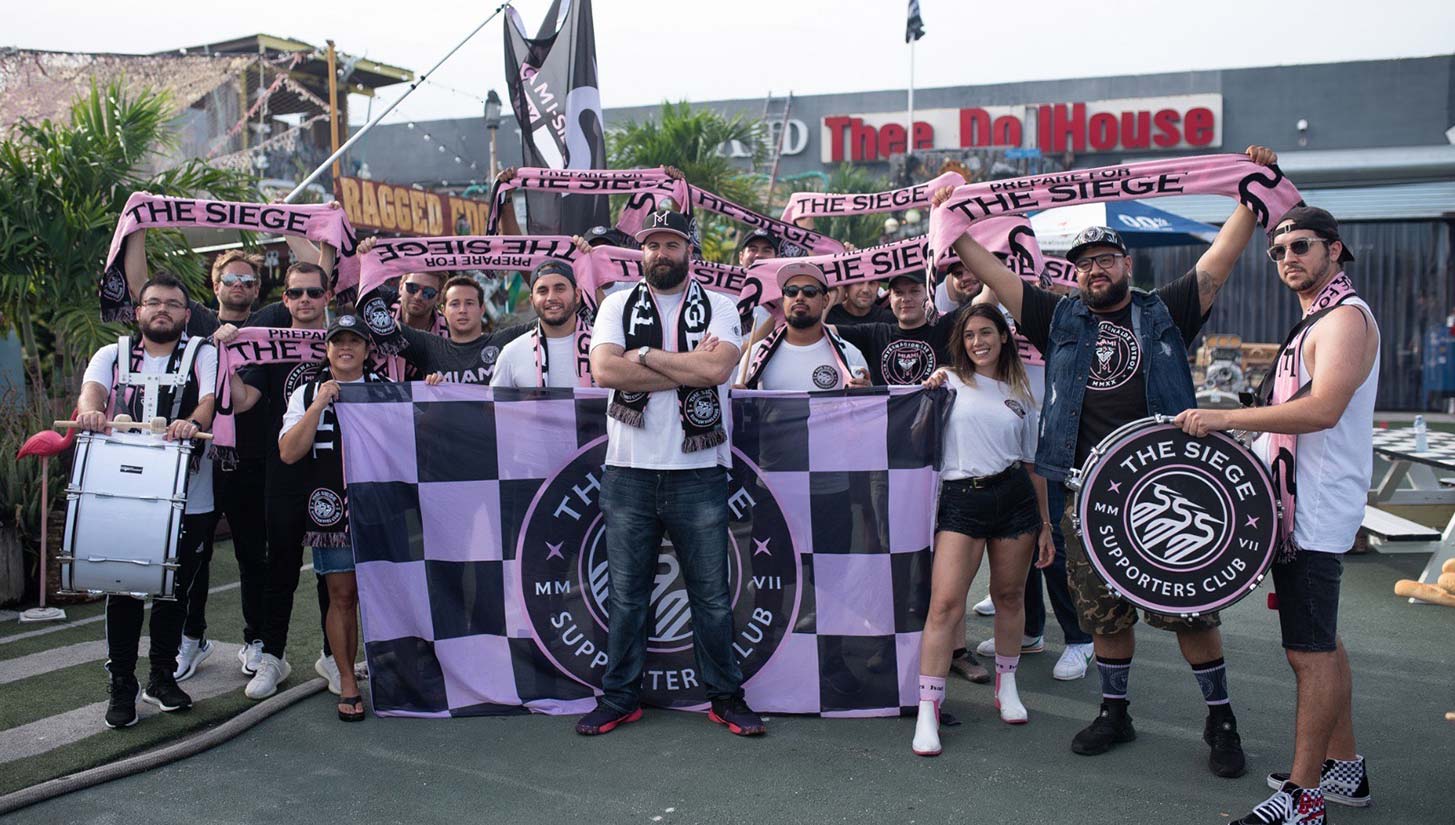 The last of the Inter Miami CF supporters’ groups to form, The Siege Supporters Club was originally a proposed re-brand of Southern Legion. The proposal was turned down by group leadership, so The Siege broke off and created their own club in early 2019. Heavily influenced by members of various English Premier League supporters’ clubs in Miami, the The Siege’s identity revolves around 100 percent inclusion.

“We don’t care how old you are, we don’t care if you like to sing, or if you want to be a hardcore or not,” said The Siege President Eric Corey.

The Siege Supporters Club name celebrates both Inter Miami and the original supporters’ group. A siege is both the collective noun for a group of herons (prominently displayed in the Inter Miami logo), and a term used to describe a war strategy (a nod to the Southern Legion’s military overtones). The logo’s trio of herons are a nod to the three main founders of the Southern Legion: Julio Caballero, Ed Serrano, and Pieter Brown. They also represent the tri-county area of South Florida. 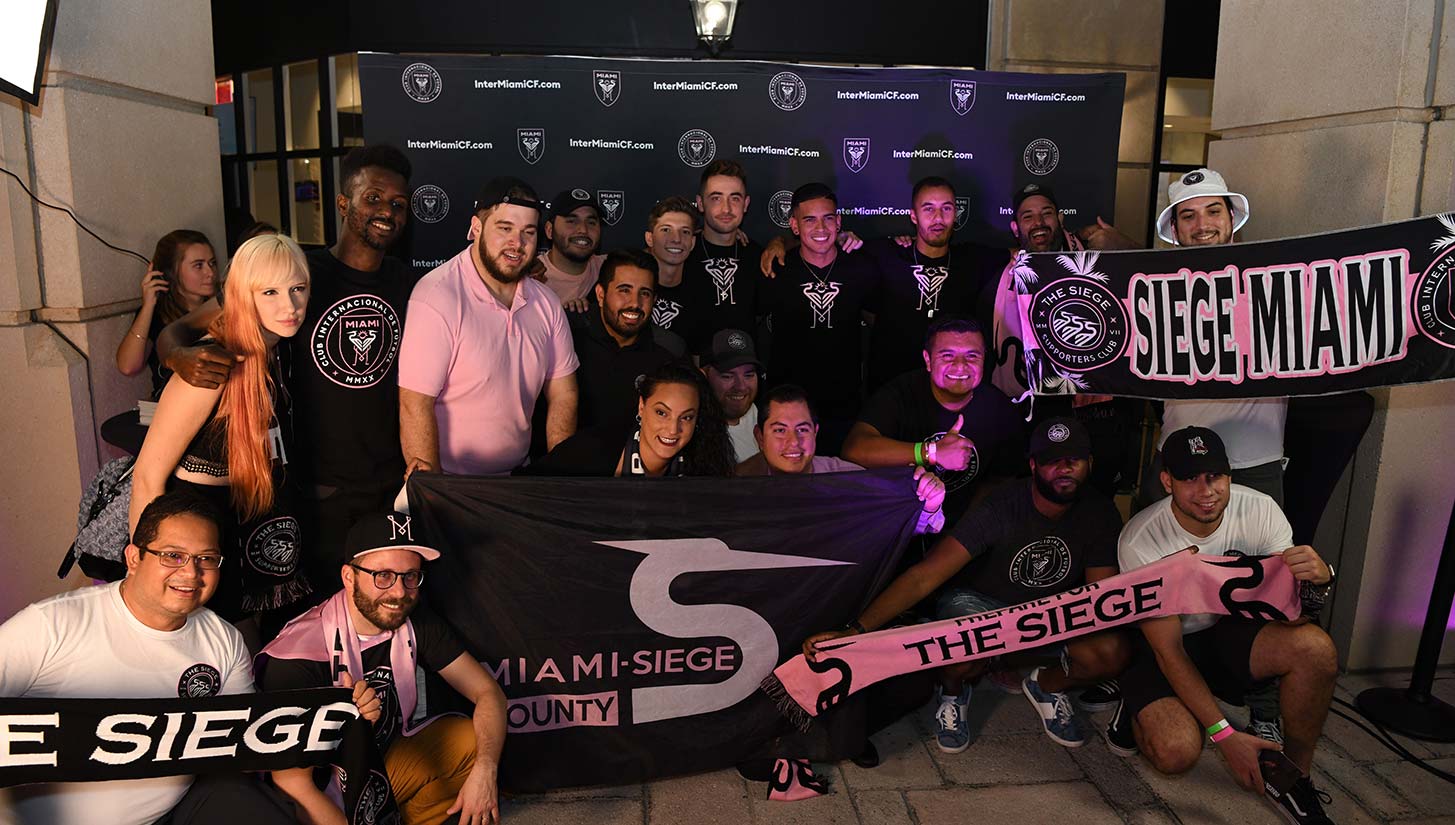 While Southern Legion and Vice City 1896 plan on giving full-throated support cutting sharply through drum beats and smoke bombs for 90-plus minutes, The Siege Supporters Club is taking a slightly different approach in order to play to their strengths.

“Our [strength] is going to mostly be about targeted support,” Corey said. “When the team needs us to get loud, we’re going to get loud. But we have a lot of people who want to watch the games who are really about the life of supporting the football team.”

To prepare for opening day, the Inter Miami CF supporters’ groups spend almost every Saturday playing 6v6 pickup soccer, barbecuing, and working on their chants and rhythms in a drum session. The pickup events provide both enlisted and prospective members an opportunity to bond and get to know one another. But that doesn’t mean they’re not there to ball out.

Vice City 1896 recently held their first Kings Of The Courts tournament before the holidays, in which 12 teams participated. And Southern Legion had a professional presence for their last pickup game of 2019, with Inter Miami player A.J. De La Garza showing out.

Inter Miami will make their debut at LAFC on March 1. For the supporters making the trek, marching into Banc Of California Stadium will be the culmination of a nearly six-year long journey. Their home debut will be two weeks later against Inter Miami owner David Beckham’s old club LA Galaxy. And if the International Champions Cup Futures opening match is any indicator, then opening day at Lockhart Stadium is going to have a raucous atmosphere. Especially with all three supporters’ groups united in a safe-standing section for the first time. For Miami. For the culture. 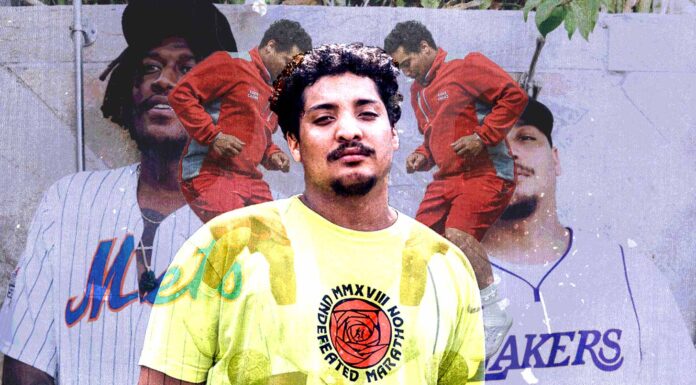