Every discipline has its masters, and in the pantheon of football freestylers none is more legendary than Woo Hee Yong, or “Mr. Woo” as he’s fondly known around the world. Woo was born in Korea and at a young age developed an immense passion for football. Like many of the world’s soccer greats, he cultivated that passion on informal pitches and pickup games with local friends, aiming to be a Korean national team player someday. An injury in high school dashed that dream, however, and Woo was forced to rethink his future in football. Meanwhile he continued honing his skills, working with the ball on his own for hours a day.

In his mid-20s, Woo left Korea and spent several years playing with Stuttgarter Kickers in Germany’s Bundesliga. It was during this time that he began performing freestyle at major events, including the 1988 Seoul Olympics and Pele’s 50th birthday celebration in 1990. Soon, Woo’s path became clear: He was determined to become the greatest freestyler in the world.

The rest, as they say, is history. Today, Woo’s name is practically synonymous with freestyle football—and his career is not over. Now in his early 50s, Woo has embarked on a mission to make freestyle an Olympic sport as he continues to lead and inspire the next generation of freestylers.

Urban Pitch is honored to present our interview with Mr. Woo, the first article in a two-part series that will spotlight his incredible career.

Urban Pitch: You started playing football at a very early age. What was your first memory playing with a soccer ball?

Mr. Woo: I started playing soccer when I was five or six years old in my small countryside village, called Sinjangdong. I played by myself a lot, everywhere and anywhere I saw space. There weren’t specific areas set aside for soccer, so I played in rice, barley, and bean fields. I also played with older village friends in 1v1, 2v2, and 3v3 games. I fell in love with soccer because of one particular friend, a brilliant player who was five years older than me. My passion for soccer came from this friend. I always followed him around and wanted to be like him, I wanted to be a soccer genius and hero like him.

There weren’t specific areas set aside for soccer, so I played in rice, barley, and bean fields.

Who were your soccer idols/models when you were growing up?

When I was a child, my first soccer hero and idol was my hometown friend who I mentioned previously. When I was about 10 years old, the American Cosmos pro soccer team visited Korea. I also saw Pele for the first time on TV, and from then on Pele became my idol. I loved his dribbling and artistry, and I was impressed with how he lifted the ball with his foot, knee, and head. When I played for my middle school soccer team, the coach often gave us time to work on lifting the ball. I don’t think I had much talent for soccer but I was a very hard worker and very passionate about the game. After each team training session I did extra training on my own. I practiced and trained relentlessly almost every day, with the goal of becoming a Korean national team player. Maradona was my third soccer idol. I loved the way he played, especially his fantastic dribbling and perfect touch on the ball.

With the soccer ball I felt freedom and happiness; I didn’t worry about the future and enjoyed playing more than anything else.

What were some of the challenges you faced early on in your career, and what motivated you to continue pursuing and mastering freestyle football?

I played soccer for 10 years and put everything, more than 200%, of my time and energy into it. My family supported me, but after 10 years there was nothing to show. While on my high school team I broke my knee and couldn’t play anymore, so I had no place to go and no one wanted me. I was extremely disappointed with myself and had no energy to live. I’m the only son in my family and carried a heavy responsibility to my family and parents. Even though being unable to play soccer was the saddest thing, I didn’t have much time to cry about it. I quit school and decided to earn money to support my two younger sisters and help my poor mother. 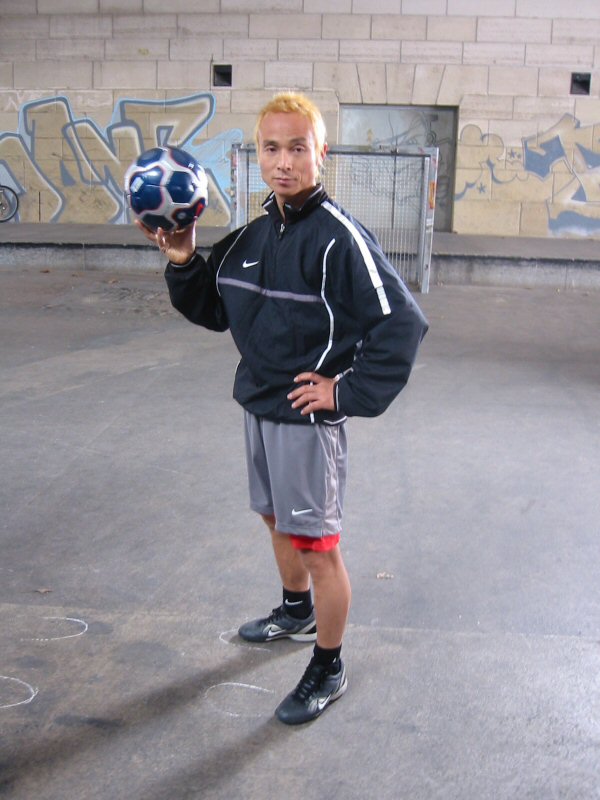 I gave up my dream of being a national team player because I had no choice—but I still couldn’t throw away my ball. I don’t know why. Somehow I continued to see my hope and future in a soccer ball. That was 35 years ago. Everyone, including my family, used to tell me “you are crazy.” My mother especially pleaded with me, “Son, please stop playing with the ball.” Seeing her sad and crying was heartbreaking, but I felt I couldn’t live anymore and that I’d kill myself if I didn’t play ball. With the soccer ball I felt freedom and happiness; I didn’t worry about the future and enjoyed playing more than anything else. For the next seven years I practiced almost everyday, for six to seven hours. If I went back to that time, I’d probably be afraid to do what I did given my unsure future and family responsibility.

Thirty-five years ago as a young Korean man, I wished that young people all over the world could experience freedom through freestyle and now this dream is coming true.

How would you describe your philosophy toward freestyle as a whole?

“Get Freedom, Oppose War, Create a Beautiful World.” Thirty-five years ago as a young Korean man, I wished that young people all over the world could experience freedom through freestyle and now this dream is coming true. For the second half of my career, my goal is to make freestyle football an Olympic sport. My vision is that freestyle will be accessible to everybody, no matter the physical or educational level, and that together we can use freestyle to transform lives and make a better world. The good thing about freestyle football is that all ages can play and all kinds of people can watch and enjoy it. I also want to make freestyle sustainable, and so I think it’s my responsibility and mission to lead the world freestyle industry.

We need to stay close to football and maintain the support of football fans. All freestylers should recognize that freestyle originates from a passion for soccer. If you want to be a pro freestyler then please ask yourself, will they pay to watch my routine? Will I be able to get a standing ovation from soccer fans? Am I trying to create my own style? I recommend keeping true to your personal style, and then you will become a pro.

Pele told me, I have never seen anyone like you. You are the king of the soccer ball.

What was it like performing for Pele for his birthday?

That was October 1990 in Milan’s Meazza Stadium, where the 1990 Italia World Cup opened. I remember it was the same year I left South Korea as a 25-year-old and was basking in Green Street in Stuttgart, Germany. One day someone came and asked me, do you want to meet Pele? I couldn’t believe it! But this was real, and after two months I went to Milan. The person who invited me was working for a big insurance company that was sponsoring Pele’s 50th birthday event, which included a match between a world all-star team and the Brazilian National Team. For 15 years I had dreamed of meeting my hero Pele, and after 15 years that dream came true. I was really excited and delighted to perform for Pele. I was also very, very nervous—my whole body was shaking. I did the half-time show in front of Pele, the world’s soccer stars, and 70,000 spectators. Pele told me, I have never seen anyone like you. You are the king of the soccer ball. 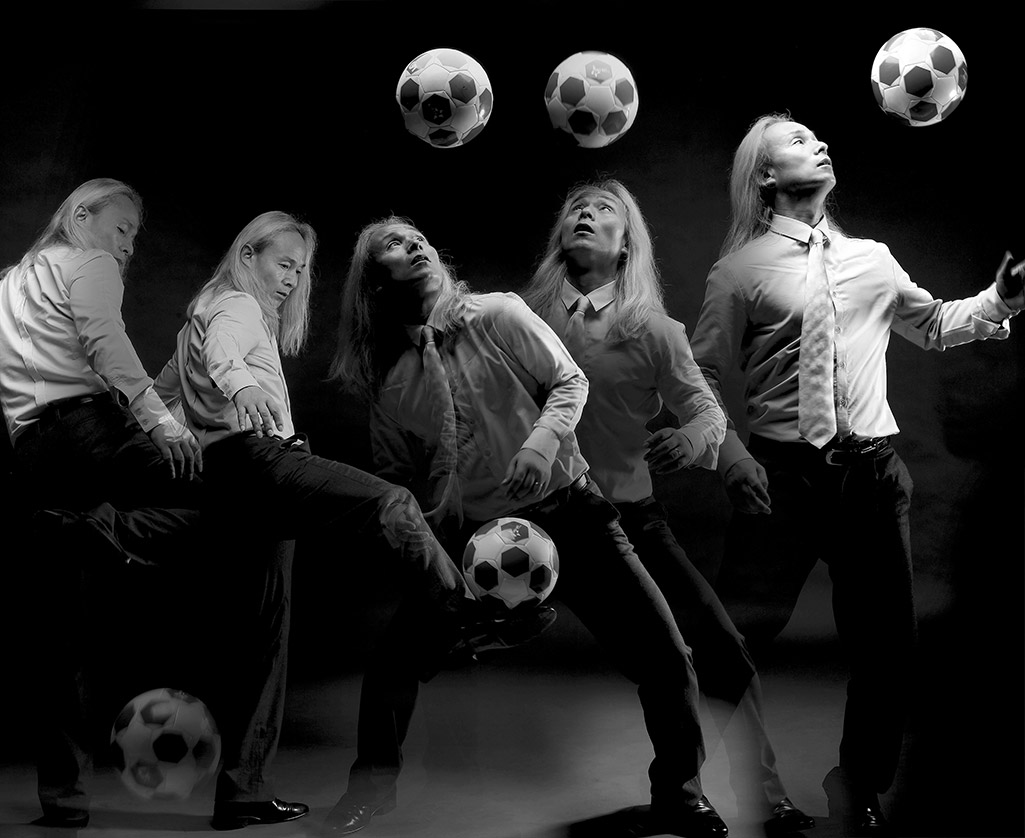 I bet my life on freestyle 35 years ago, and my job continues every day.

Many have described you as the greatest freestyle performer in the world. How do you think freestyle has changed over the past several decades? And what are you most excited about going forward?

I’ve been working very hard for the last 35 years—since I was 18 years old—to pioneer global freestyle and have watched three and a half decades of freestyle world development. I practiced freestyle for seven years in Korea, seven years in Germany, seven years in America, and seven years in the UK. I’ve also spent seven years building the WFFF (World Freestyle Football Federation) in Korea. The sport has been growing and developing rapidly for the past 20 years and one of the major reasons is because the birth of the internet. The internet helped me a lot in building up and promoting my career, and has also increased the membership of the freestyle world. Freestyle is a very creative sport with an appealing culture and it deserves to be in the Olympics. My plan going forward for the next 10 years is to turn freestyle into an Olympic event. I bet my life on freestyle 35 years ago, and my job continues every day.

You’ve lived and performed all over the world. After returning to Korea and establishing the World Freestyle Football Federation (WFFF), what role do you think Korea can play in the global freestyle movement?

Korea is the headquarters of the Freestyle Federation and should be the home of freestyle because a Korean is the founder of freestyle. I’ve been acknowledged all over the world as a pioneer of the sport for the past 35 years. The mission of WFFF is to get freestyle into the Olympics and be a leader of the sport worldwide. Of course the WFFF will support other countries as well, because it’s my personal mission to inspire all young freestylers. I want to help young people have happy lives and hopes and dreams, and especially encourage those who don’t have any hopes or dreams.

Tell us about the WFFF event you’re organizing later this year.

The first “Mr. Woo Korean Freestyle World Championship” will be the biggest freestyle event seen yet. I’m thrilled to be organizing this and have spent the last several years on preparations. I haven’t decided on a concrete date but it will possibly be this October. The venue is an indoor stadium with a capacity of about 35,000, and the winner will receive a minimum of $50,000. This will be a showcase of the bright future of freestyle football. I’m planning to invite a K-Pop group as part of the program as well.

Look out for the second segment of our profile on the legendary Mr. Woo, coming soon!

*The responses in this article have been edited for clarity. 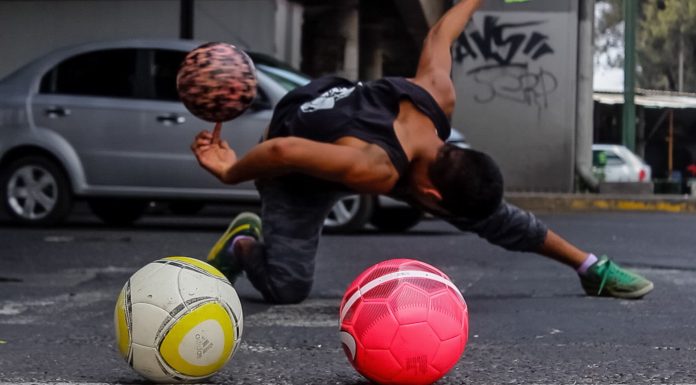