We head to picturesque San Sebastián to get an intimate look at the important role Real Sociedad plays amongst the town and its die-hard fans.

That tone of blue. That distinctive azure hue has become a part of San Sebastián. It is represented on the flag of the city — it’s their leitmotiv. The sea is a permanent resident of San Sebastián, a living, breathing, and inseparable feature that has come to define the Basque resort town. 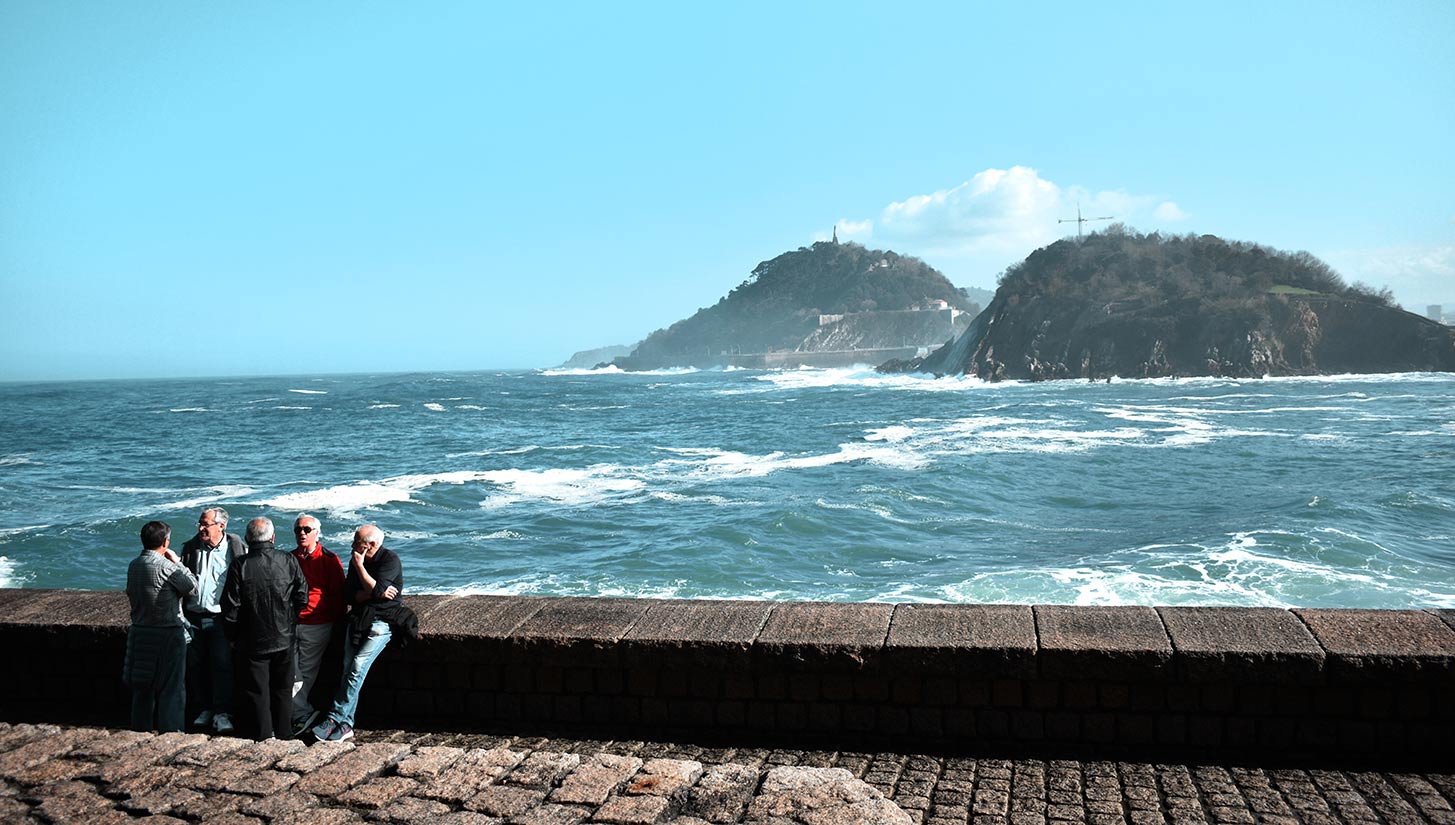 The city’s roots are buried beneath the sands of the endless beaches, and as the day ends and tide rises, the messages written on them are washed away. In my mind, the etymology of San Sebastián stems from “the culture of the sea.”

Located in the North of Spain, San Sebastián is one of the most beautiful cities in Europe. It stands out especially in Basque Country as an excelsior land pulled straight out of a fairy tale. In Basque, the town is named Donostia, and its residents are more often than not clad in blue and white attire. Donostiarras are fiercely in love with their local team, proud to see how the txuri-urdin (white and blue) flag flies high. 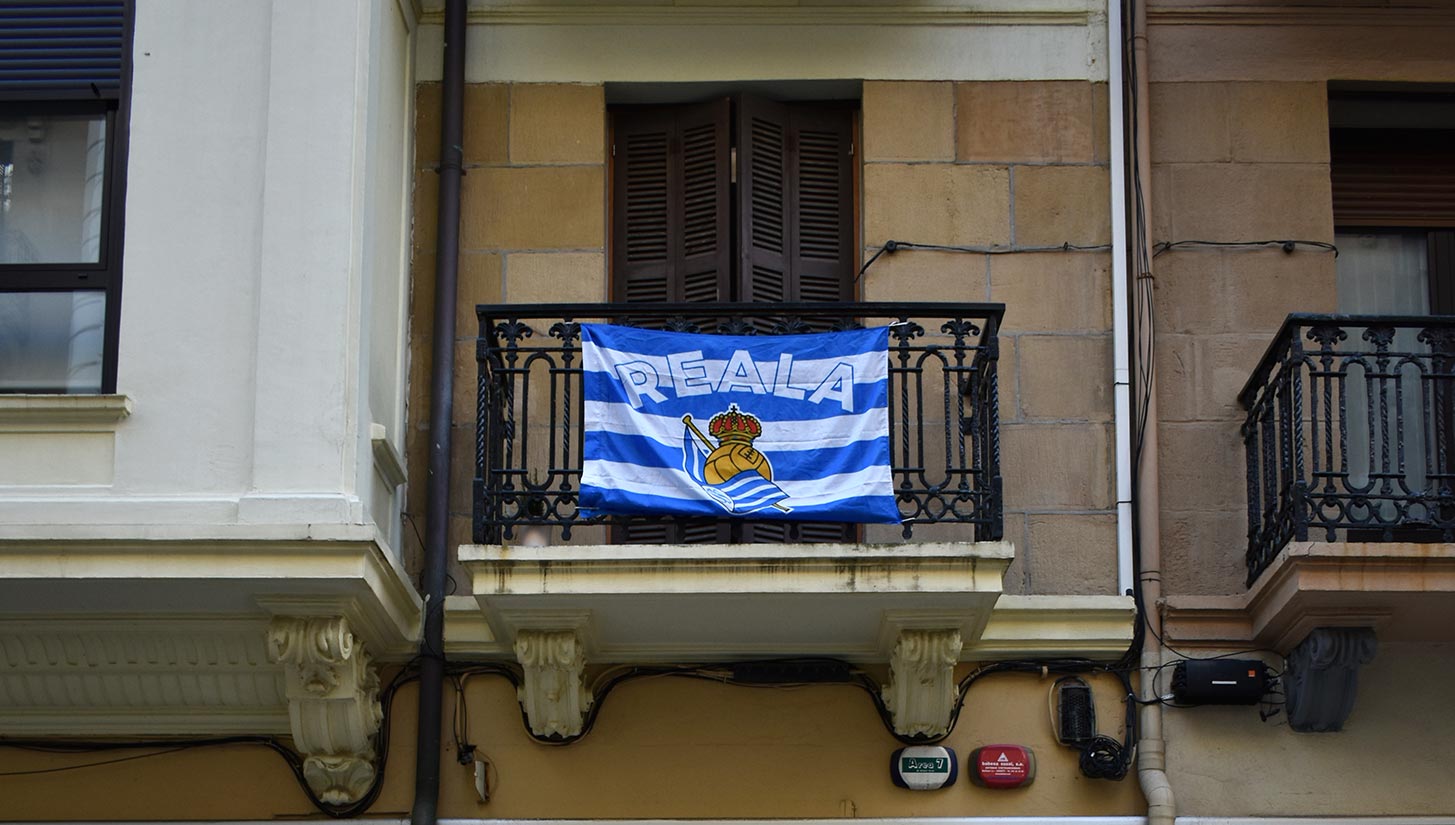 Founded in 1909, Real Sociedad de Fútbol is one of the most classic and legendary teams in Europe. One look at their crest and respect for tradition and history will confirm it. The memories of the ancient Atotxa Stadium, where Real Sociedad played its home games for 80 years, are still present throughout the city. A proper British structure for the Basque side, all fans were roaring during the whole game. The assistant referee must be careful with the fans. The stands were so close to the pitch that, during rainy games, there were fans pricking the ref with their umbrellas! 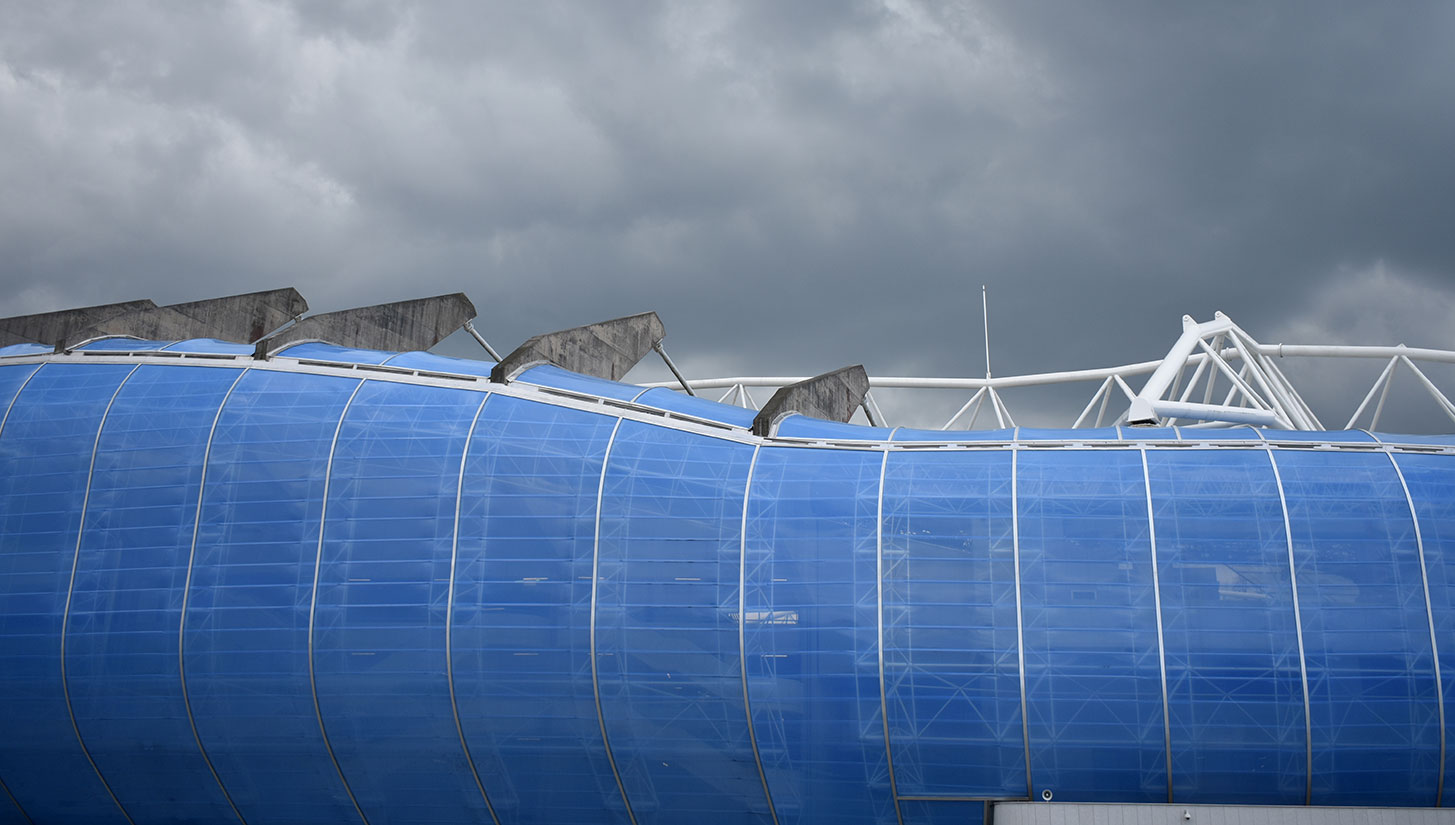 However, those glory days escaped Reala after the club moved from that matchbox to a new stadium. Anoeta, where they play today, has all the modern amenities you could ask for, but it was cursed with a running track that perimetered the playing field.

Can you imagine going from a place where the referees were within umbrella-poking distance to one so separated, cold, and impersonal? The impassioned fanbase was condemned to this fate for over 25 years, until the club put together a redevelopment plan to get fans closer to the pitch last season.

“I remember how special it was to be at Atotxa those years,” said Jon, who was sitting next to me at a bar near San Telmo’s Church. “Next to the stadium, there was a fruit market and my dad always made sure to get an extra piece of fruit to throw it, just in case. People went drinking wine, cider, or beer, smoking cigars and creating the proper atmosphere for an Atotxa game. Now that’s impossible.”

Jon finished his beer, paid his tab, then exclaimed “Aupa Reala!” to the waiter with a victory V, and left.

Despite the quips with the Anoeta, Real Sociedad has managed to survive and keep an identity, with young and skilled footballers both Basque and foreign. It is this squad that has reached the semifinals of the Copa Del Rey, squaring off against Club Deportivo Mirandés with a potential finals match against neighboring Athletic Club on the line. 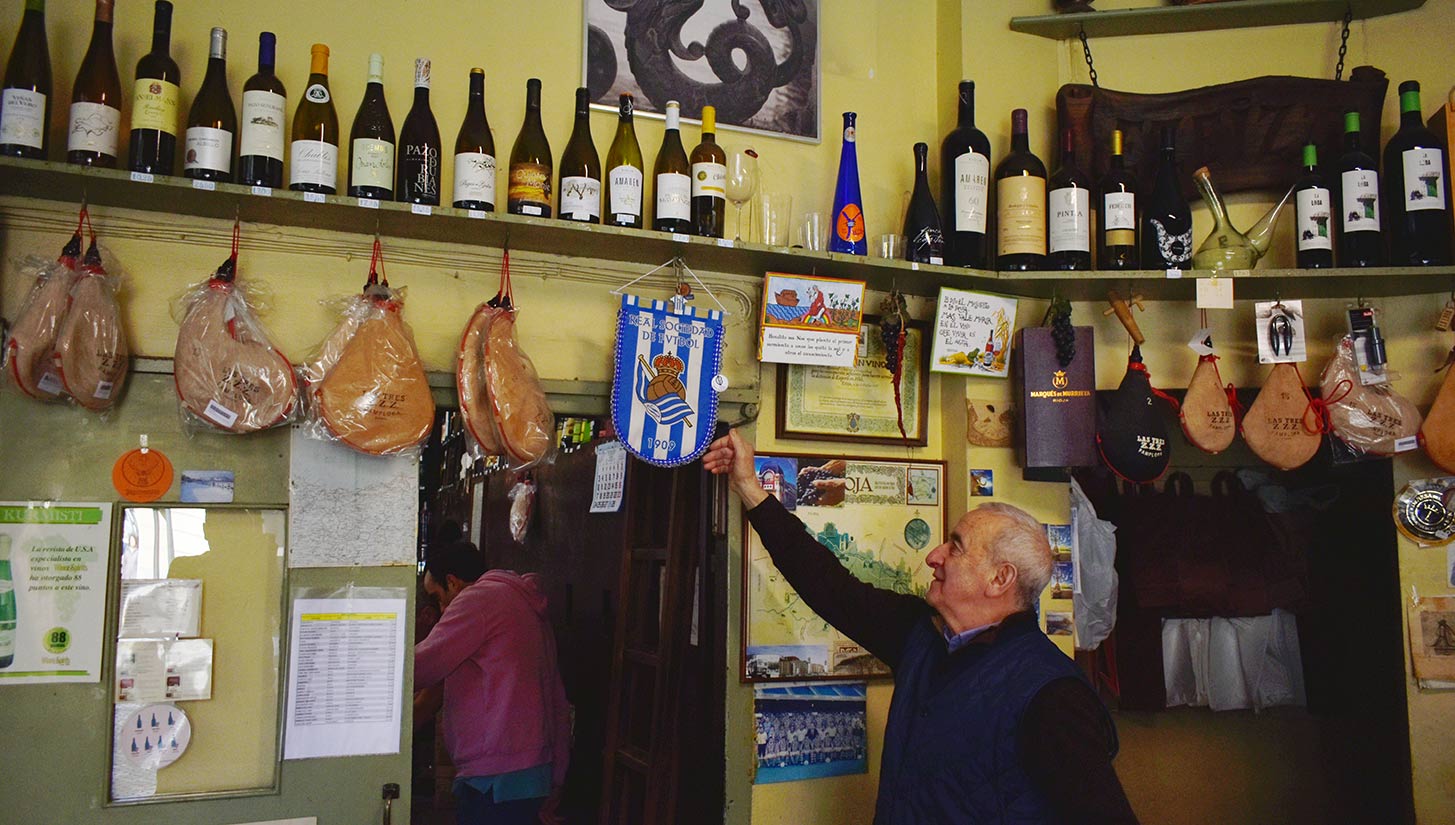 In town, you could feel the atmosphere and the importance of the game. Even the city buses were showing Real Sociedad colors. Newspapers littered just about every bar, as fans wanted to stay up to date on the latest status of both clubs while talking with the waiters and fellow patrons.

“Take this opportunity, Holy Trinity day. Pintxo, beer, and Real Sociedad!” was announced in one of the bars located in the old town. 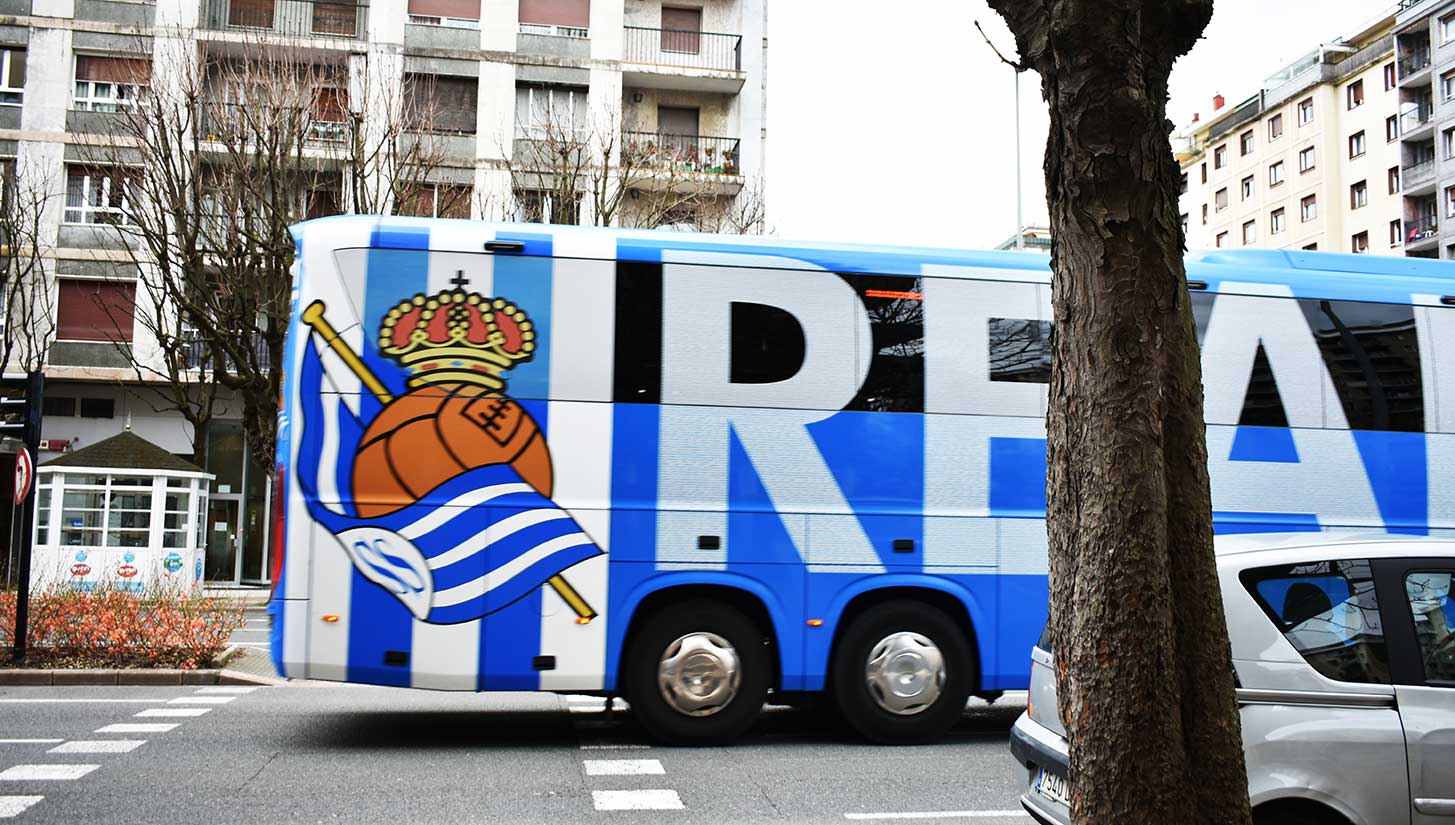 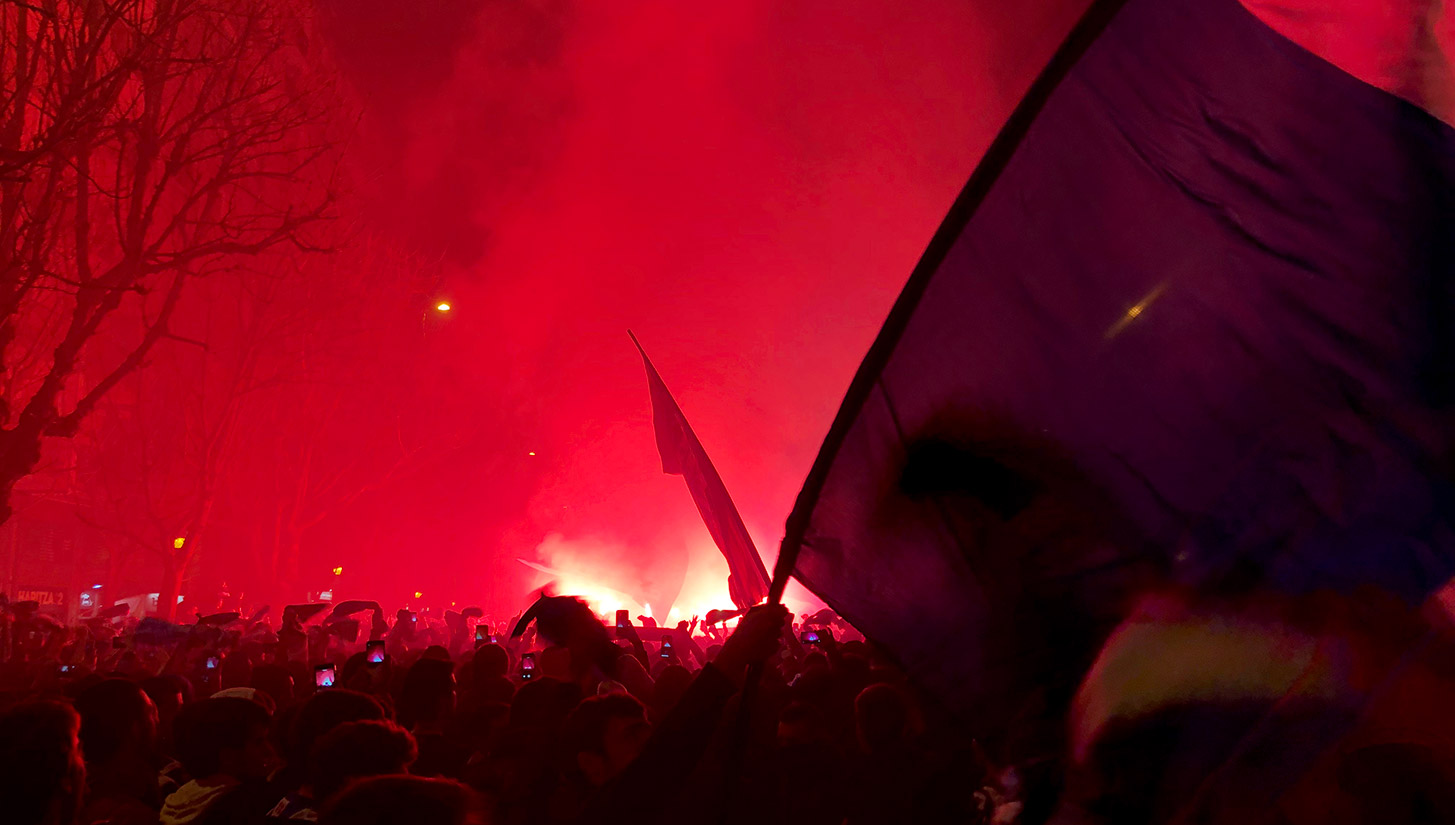 Hours before kickoff, the city welcomed the team bus in an impressive fashion. From the city center all the way up to the new Anoeta, Real Sociedad fans surrounded the bus in a celebratory manner. The flares popped off while the flags, scarves, and pyro pushed Real Sociedad on towards their biggest game in recent years.

The entire city truly showed up behind their club throughout the day, and the unreal match atmosphere drove the home club to a convincing 2-1 victory. Over 35,000 txuri-urdinak cheered on the squad and lived the dream, remembering those posters with those epic moments when Real Sociedad celebrated titles with the fans. It was unbelievable to see what they came with and how they supported their team. 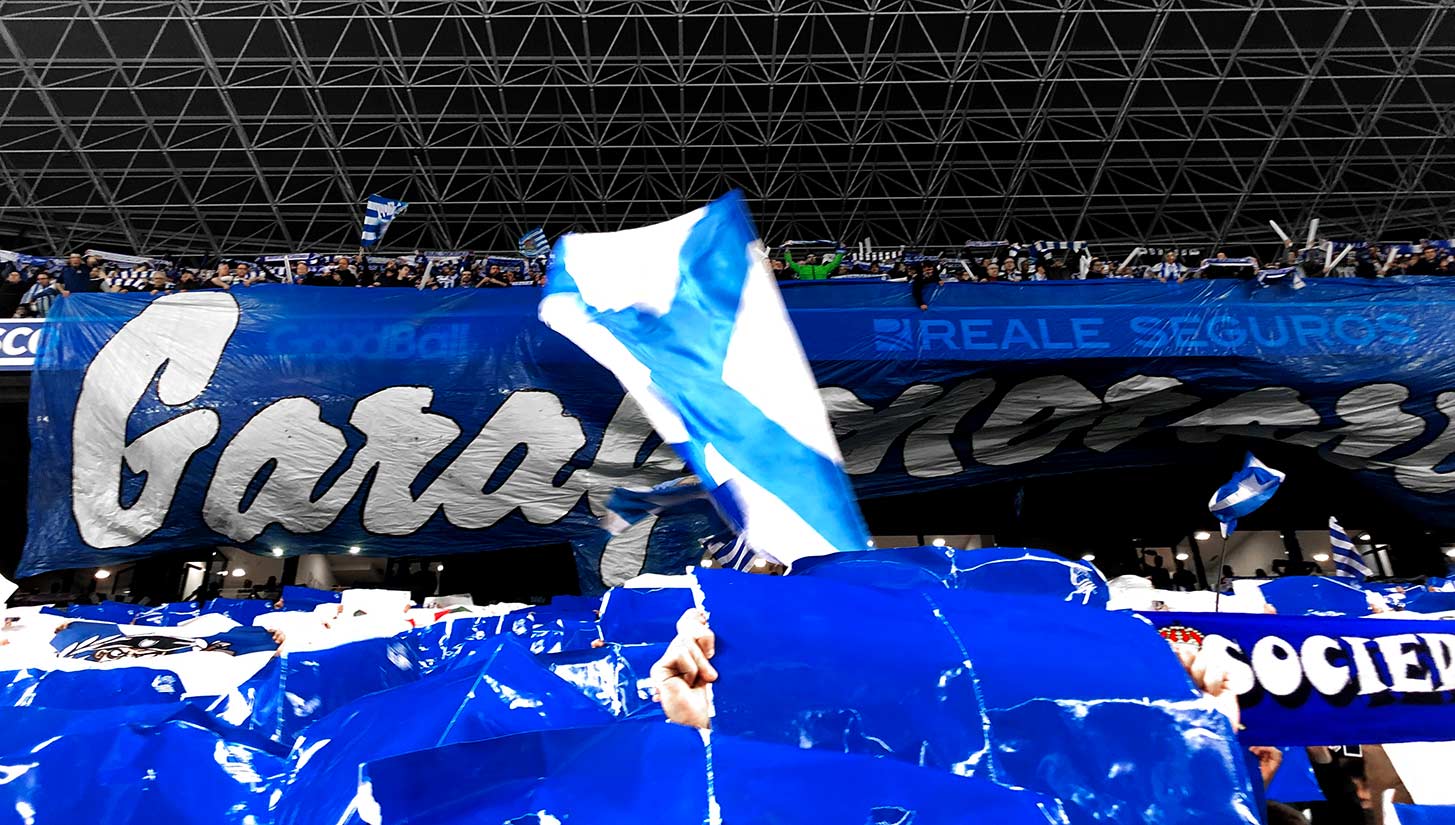 The legend says that the talent of the best players from Donostia is forged on the sand of La Concha, the main beach of San Sebastián. By having a contemplative walk around the bay, you can realize football is part of daily life. Children are playing with makeshift goals, escaping from the waves and the shouts of their parents telling them to come home.

On the sea, the urban layout of the city overlooks La Concha Bay and the Monte Igueldo. After a hard day, it’s romantic to see how the fishermen make their journey back to the port, pulling down all the tools and elements for their job. 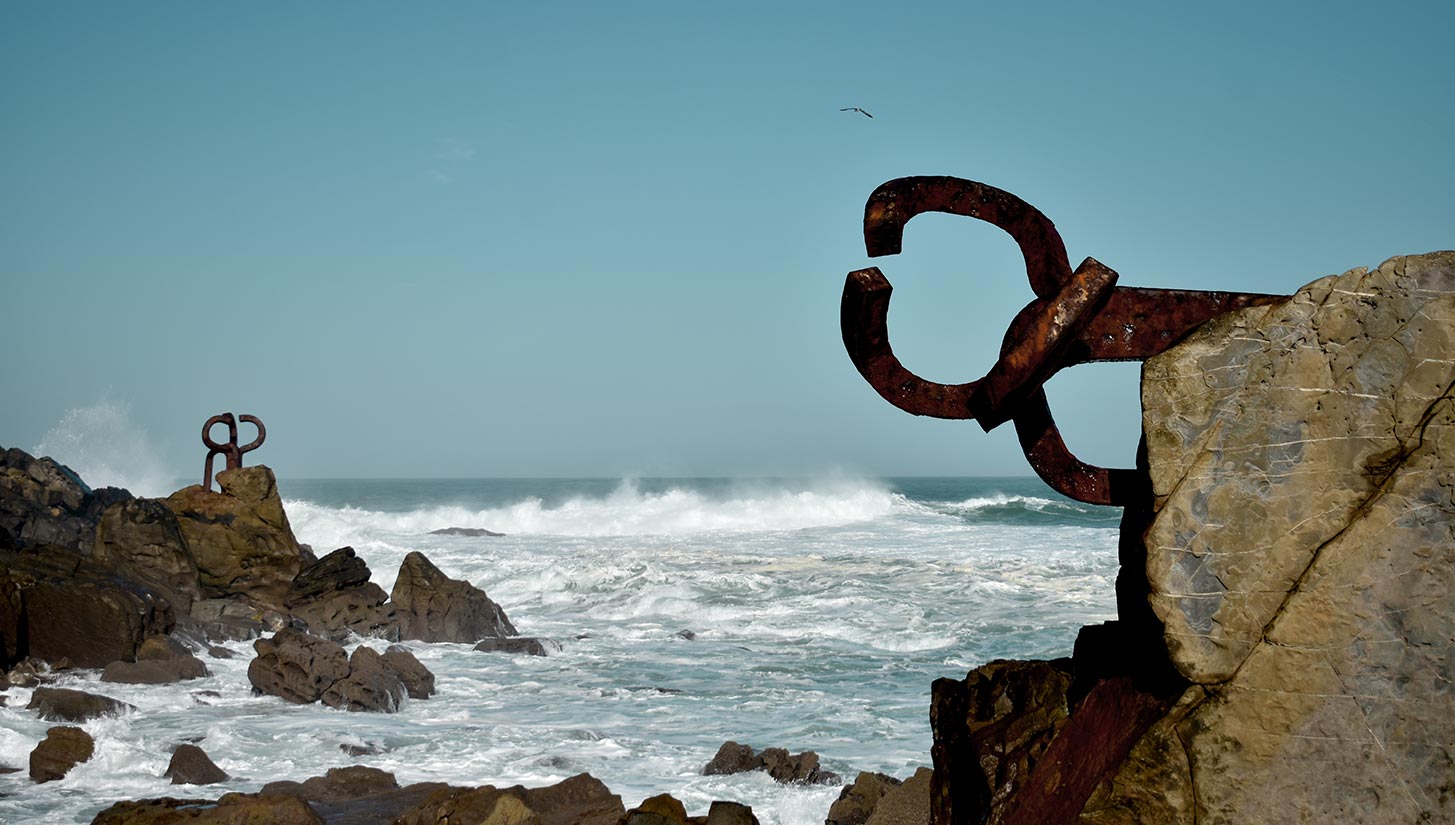 Exhausted sailors end their journey in which they were wholly disconnected from the world. “How did Real Sociedad do?” That’s the first and only relevant question for them. Not too long ago, every home goal was celebrated with two fireworks to advise the sailors that Real Sociedad scored.

As one of the 10 founding clubs of La Liga, Real Sociedad is ahead of its new bright future. As a club committed to the community, the people feel part of it. You’re born into fandom. No one asks, it is assumed. If your life begins in San Sebastián, you support Real Sociedad. It’s as simple as that. 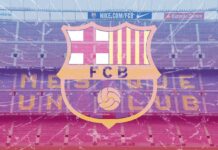 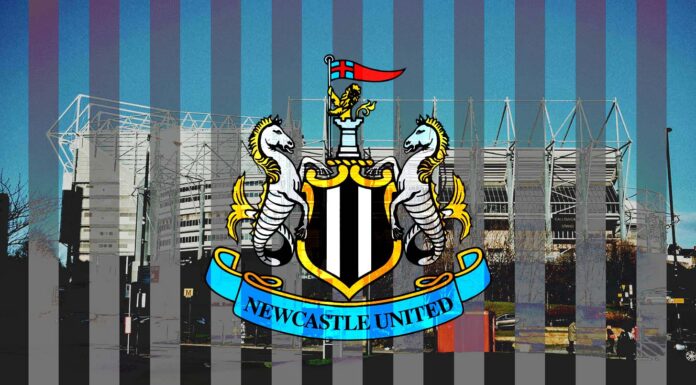