Football fans and pundits love to debate upon which of their favorite players are better. But instead of pitting these oft-compared footballers against each other based on their playing ability, we look at their sartorial acumen.

It comes with the territory of being a football fan to engage in unending debates involving players, breaking down each and every aspect of what makes one great and the other not as much.

However, we decided to flip the script, and instead of basing our debates on on-pitch performance, we’ve used off-pitch style as our main criterion. For each pair of comparable players, we’ve chosen one fit and put them head-to-head to determine who’s got the most drip once and for all.

To make the comparison fair, we picked a theme for each duo and made our judgements solely based on how said players curated their outfits for the occasion at hand.

Spoiler Alert: There’s no Lionel Messi versus Cristiano Ronaldo discourse, because we’re in 2022. It’s time to move on.

The debate around who out of the pair is the best full back in the world is a conversation for another day, so instead we take a look at the pair of EPL stalwarts’ best fits while on vacation. 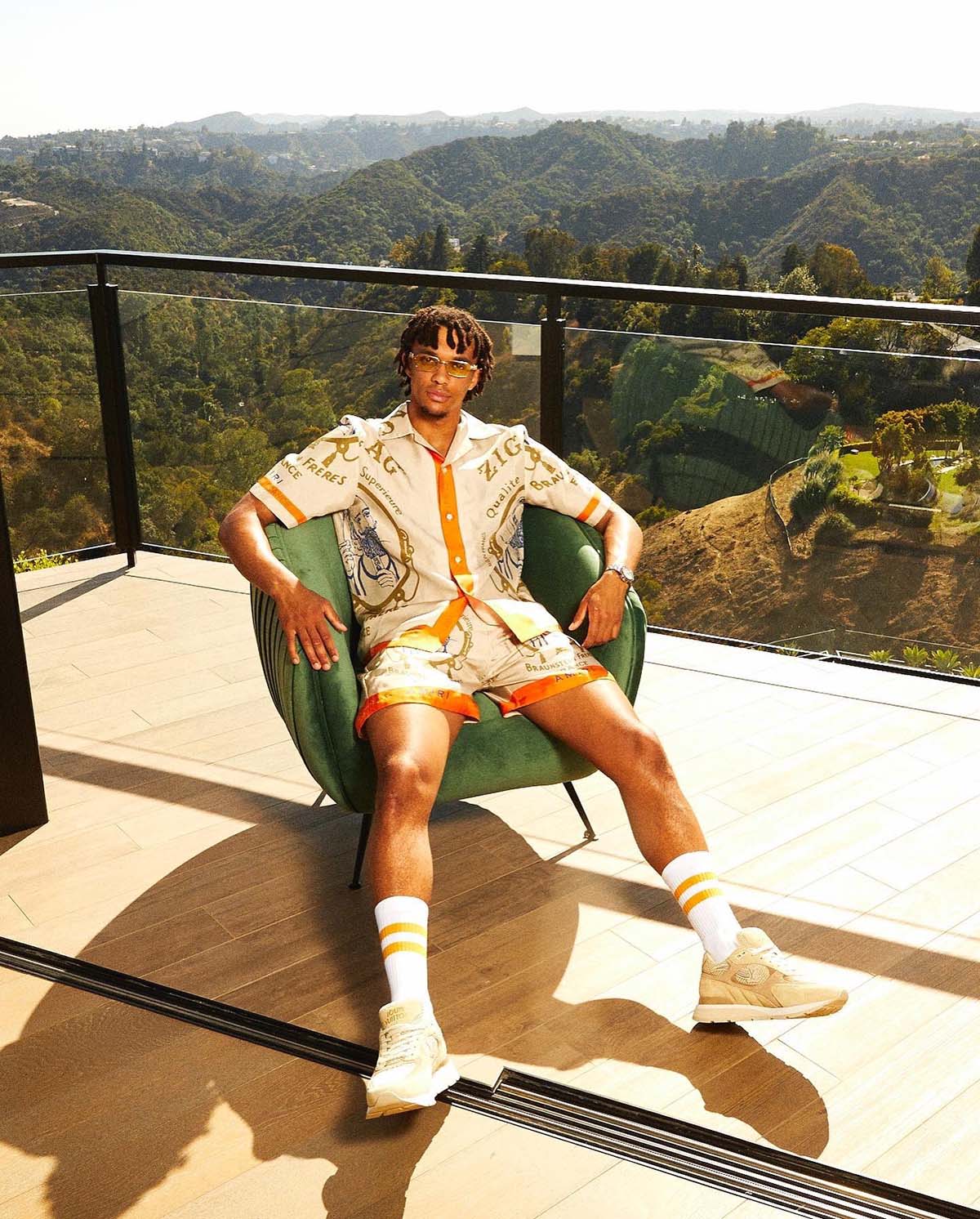 It’s safe to say that the Liverpool right back followed the holiday season memo to a tee. Looking at the Amiri x Zig Zag graphic print silk shirt, which was one of most coveted designer shirts of its kind last summer, and we’re off to a good start. The matching shorts take things to another level for the England international.

While footballers tend to opt for brands that can be instantly spotted by labels, the Champions League winner has taken a more understated route in this respect, which is admirable.

The Louis Vuitton sneakers match with the tone of the fit and considering the man is rocking one of the most sought-after brands in the world, he has kept it extremely low-key.

And speaking of the tones at play, the eyewear and the socks match with the entire fit as a whole, rounding off a masterclass in holiday drip from one of the best right backs on the planet. 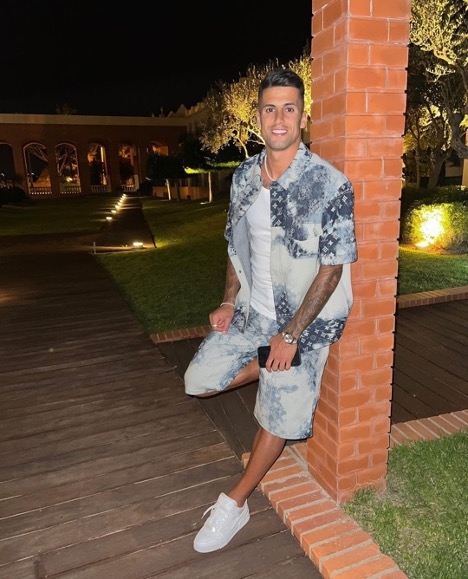 Cancelo, on the contrary has put subtlety aside and decided to flex on the ‘gram while on holiday. The Manchester City full back posed in a monogram short-sleeved bandana shirt by Louis Vuitton, which seems to be a popular choice amongst a number of footballers. Much like Alexander-Arnold, the Portuguese international also had the shorts in sync with the shirt and Louis Vuitton sneakers to round off the fit.

Ultimately, Cancelo’s clobber screams holiday vibes as well, which was the goal at hand. But the question is, does it wow you, and that’s where he may fall short in this very debate.

And the winner is: Trent Alexander-Arnold.

Yes, Cancelo was typically stylish on holiday, but the Reds defender showcased how tapped into the fashion game he is with the Amiri drop. The tones on show in his fit makes him the clear winner in this battle.

Considering Erling Haaland and Kylian Mbappe have contrasting styles, we decided to compare which generational talent wore the better tracksuit.

Trackies have become both everyday wear and a fashion statement for some of the best footballers in the world as well, and considering the two youngsters’ ages, we deemed it fair to make a comparison based on the Gen-Z ultimate streetwear staple.

With Haaland and Mbappe being 22 and 23 years of age respectively, it only made sense that we brought a tracksuit war to the table. 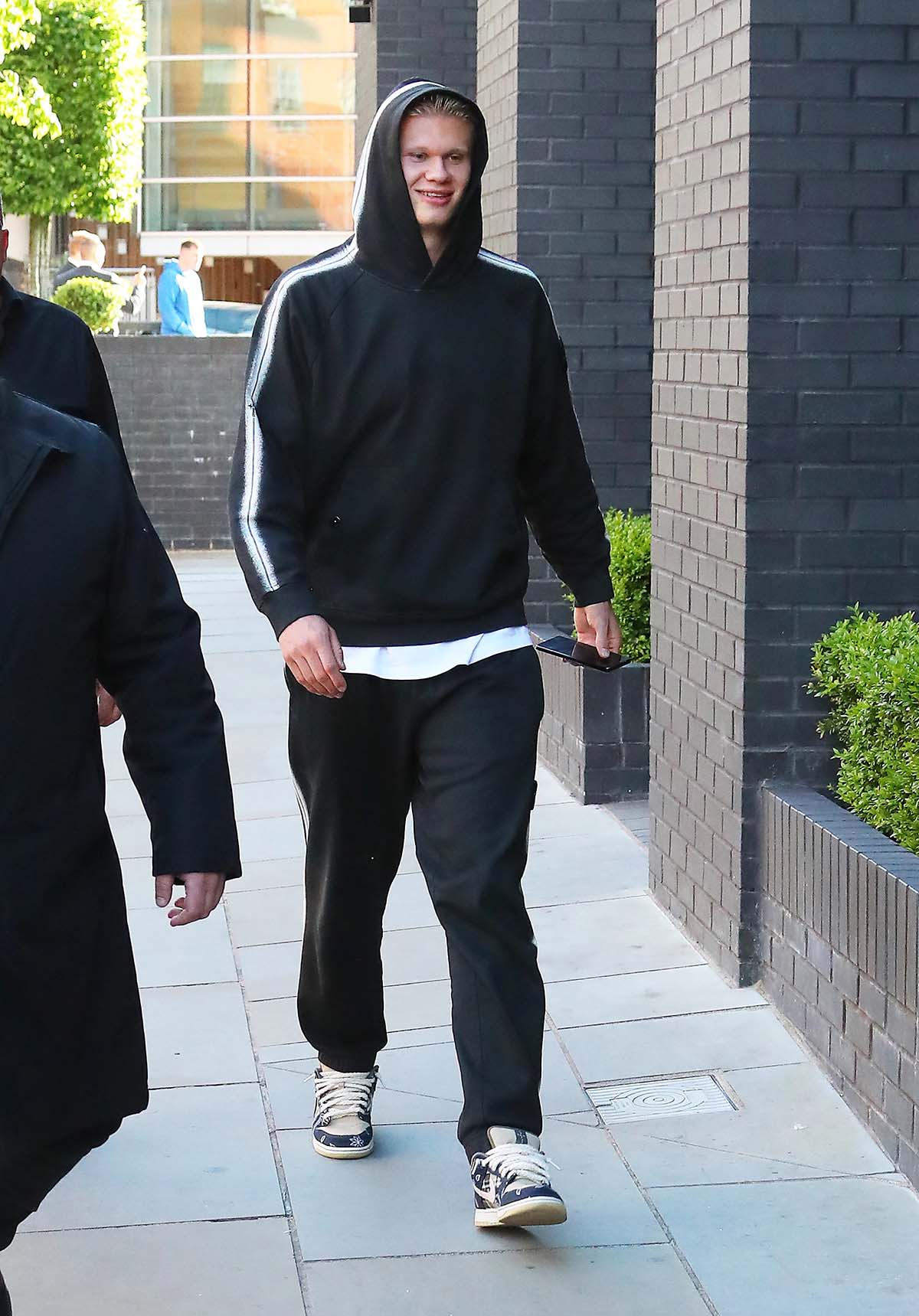 Hopping straight off a private jet to land in Manchester for his medical at the Etihad, Haaland decided to embrace his move to England in the most fitting way by wearing a Stone Island tracksuit.

The Italian brand has managed to seep into British footballing culture for years on end, to the extent that none other than Pep Guardiola is often spotted sporting ‘Stoney’ jumpers.

Haaland, a boyhood Manchester City fan, made a statement, as the all-black tracksuit is one of the brand’s finest pieces. The silver and black lining on the hoodie and the bottoms offers a welcome contrast to the otherwise extremely clean fit.

Topping the squeaky-clean ensemble with the Nike Travis Scott Dunks, and the former Borussia Dortmund marksman proved that his eye for fashion is as potent as his eye for goal. Credit to Haaland for making headlines but not stealing them, as the conversation at the time remained focused on his imminent move to the Sky Blues instead of some outlandish fit. 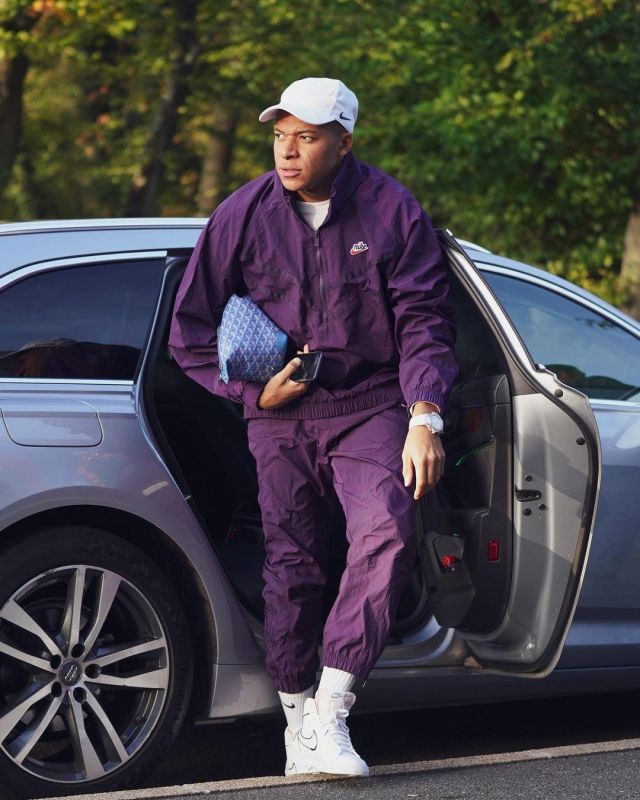 Of course, Mbappe can go blow for blow with Haaland, not just on the pitch but in the style game too.

The Frenchman has a habit of wearing a pristine tracksuit every time he shows up for international duty, and tends to smash it out of the park.

The Paris Saint-Germain superstar has done so yet again, with an all-purple Nike tracksuit. In addition to the unique colorway, the ’70s Swoosh on the jacket is also a subtle, yet crucial reason why this fit works so well.

Considering the sacred rule of judging an outfit by taking a glimpse at the sneakers first, the Nike Blazer is a shoe that is always bound to be a hit, especially in white. It also matches with his Nike cap, which makes us ponder over our final decision as there’s a lot to like here. However, only one can come out on top.

And the winner is: Erling Haaland.

A close battle was ultimately won by the Norwegian wunderkind. While Mbappe is objectively the superior dresser in general and perhaps even pulled off his tracksuit in better fashion than the Norwegian striker, the latter’s Stone Island fit coupled with a sensational pair of Dunks gives him the edge.

The Fit Theme: Out on the Town

While pitting two of the Bundesliga’s finest youngsters against each other, we decided to keep it simple and assess two of their fits when they’re out and about.

It’s clear to see from the Bayern Munich attacker’s fit that his sense of style is far from that of the archetypal footballer that tends to be a hypebeast. Instead, Musiala has kicked his outfit off with a brown overshirt jacket, with one-of-a-kind patterns that make it stand out instead of a label.

While it may not be everyone’s cup of tea, it is an insight into the 19-year old’s individualism and how he would rather sport an item of clothing he adores than jump on a trend.

The white Stüssy tee underneath provides a welcome contrast to the jacket as well as his black trousers. Tellingly, the German international was spotted at an event as major as the British Grand Prix, and the sneakers he decided to wear are the classic Converse Chuck Taylors.

A well put together fit from an understated dresser that prefers to make all the noise on the pitch.

Bellingham, as opposed to Musiala has no qualms about having all eyes on him with what he decides to wear. There isn’t a better indicator of this very opinion by taking a look at the Borussia Dortmund midfielder’s Louis Vuitton tee, which is loud to put it modestly.

His choice of footwear is more low-key in comparison, but is anything but unimaginative, as he pulled out the white Dior B23 sneakers. The kicks match the top perfectly, and the black bottoms work nicely in tandem with a fit that was following a light tone.

While Bellingham’s style may be divisive, it seems to fit his vision, which is commendable.

And the winner is: Jamal Musiala.

This was perhaps the closest match-up so far. While Bellingham is easily the more fashion forward in general, Musiala’s individualism and less-is-more aesthetic has won him this contest.

Since both Vinicius Jr. and Ousmane Dembele have a habit of ripping full backs to shreds, we thought it’d be ideal to choose the best fit each winger pulled up in ahead of their mission to choose violence.

Ahead of Real Madrid’s quarterfinal clash against Chelsea in the Champions League last season, Vinicius Jr. was dressed to kill. The Brazilian winger wore a sharp Louis Vuitton zipped hoodie as part of a blacked-out ensemble, but the 21-year old was only getting started as he took his fit to another level by wearing the Off-White x Nike “University Gold” Air Force 1s.

Perhaps the biggest flex in this snap of the Los Blancos superstar, however, is the fact that he’s also strolling along while holding the Air Jordan 1 Retro High “Turbo Greens” without a care in the world.

Vinicius Jr. proved his credentials as a certified sneakerhead and a big-game player in the Champions League, scoring the winner in the final against Liverpool to give Real Madrid their 14th European title.

Ousmane Dembele kept things simple with his look ahead of Barcelona’s league game against Sevilla in 2019, and it has done the trick. The headline is the red check shirt, which goes hand-in-hand with the Jordan 1 “Track Red” sneakers.

The black bottoms are the ideal contrast as well and all in all, the former Rennes wideman’s fit is a green flag.

The question remains whether the World Cup winner outdid Vinicius Jr. with his simplistic approach, which has us in two minds.

And the winner is: Vinicius Jr.

While Dembele deserves props for his fit, the Real Madrid talisman smashed it out of the park. Marking a huge occasion with a fitting look, the Champions League winner has to take home the win.

Both Alisson Becker and Thibaut Courtois tend not to dabble into the streetwear game whatsoever, unlike most of their peers. In fact, stepping clean for the ‘gram is not on either’s agenda half as much as contending for the throne of the world’s best goalkeeper.

When stepping foot to collect the biggest honors, both elite shotstoppers have shown a tendency to go all-black with their choice of formalwear to major events. And on this basis, we decide which No. 1 does it better. 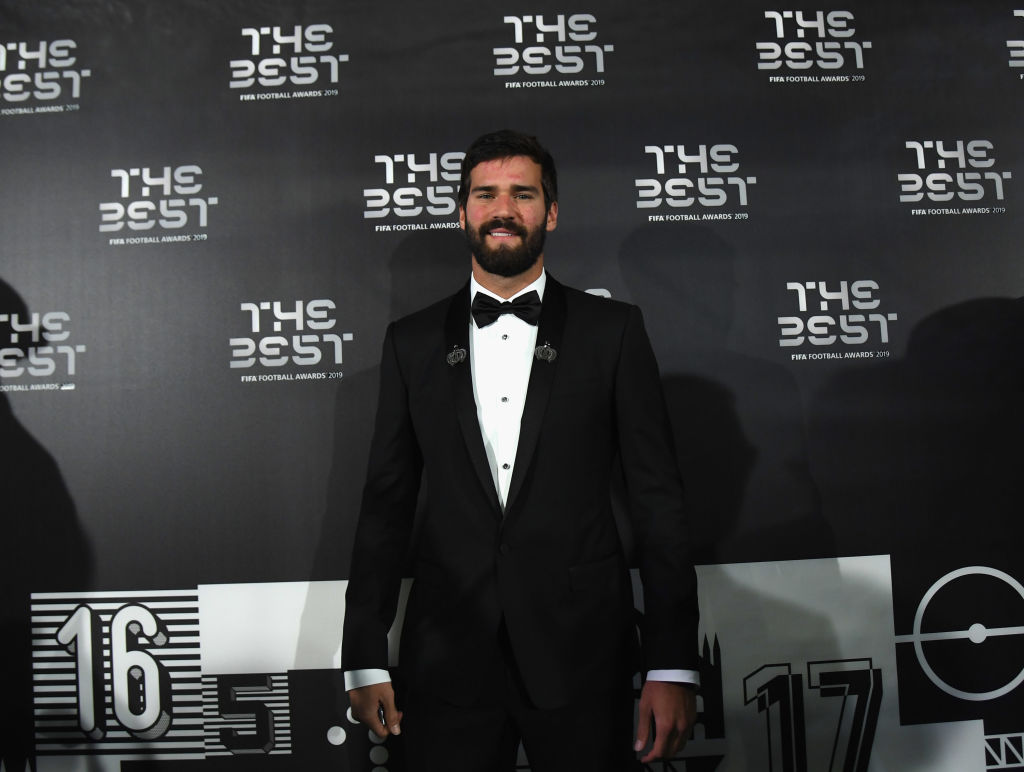 Alisson took home the Best Goalkeeper of the Year award at the 2019 The Best FIFA Football Awards, and while he was at it, he was decked out in a dapper Dolce & Gabbana tuxedo.

You can’t go wrong with a black tux, and this theory was proven right as the Liverpool talisman was perhaps the sharpest goalkeeper at the prestigious affair, both on the pitch as well as on the red carpet. Adding to the look were the pair of D&G brooches which added a bit of flair without taking away from the overall classiness of the tuxedo. 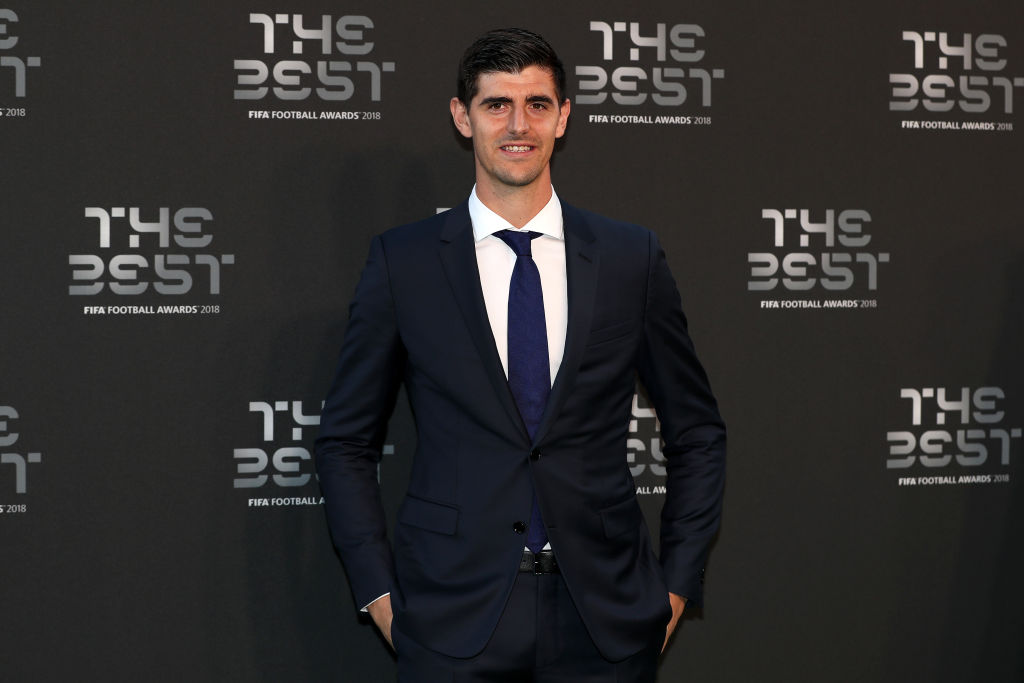 Not to bring back the 2015 viral “The Dress” phenomenon that had the internet in a chokehold, but to us, the Belgian goalkeeper is wearing an all-black suit. Now that we have put that aside, let’s assess how Courtois rocked up to The Best Awards in 2018.

While the Real Madrid shotstopper’s suit certainly fits him, it is an extremely safe look. This isn’t to imply that the ex-Chelsea star must go out of his way to grab the headlines, but his attire doesn’t scream red carpet in any way, shape, or form.

No effort has been made to accessorize, and the suit does not make Courtois stand out at all.

And the winner is: Alisson Becker

The 29-year-old’s choice of tuxedo was by far superior to Courtois’, and there’s really nothing much more to say. 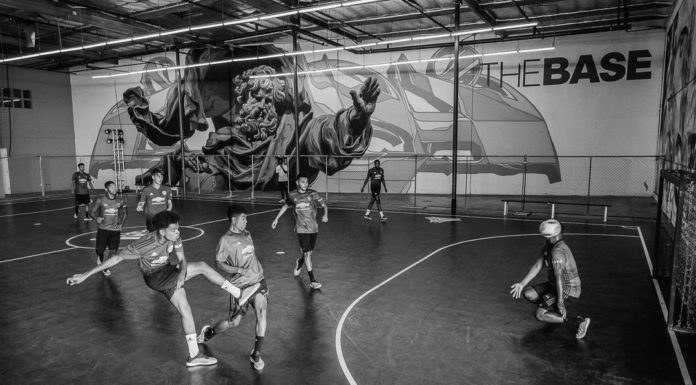