As AFCON 2021 has kicked off to an incredible start, we rank the 10 best kits from the tournament.

AFCON. A tournament of elegance and chaos. Where passion, skill,  and fate converge to a point where a team’s sheer will to win becomes the deciding factor in each match. But we’re not here to talk about that — we’re here, of course, for the kits.

From Nigeria’s highly touted 2018 sequel to PUMA’s usual run of vibrant brilliance across its nations, there’s been plenty of heat on the pitch at AFCON 2021. Narrowing the field down to 10 is no pedestrian task, but if it were easy, it wouldn’t be this fun. 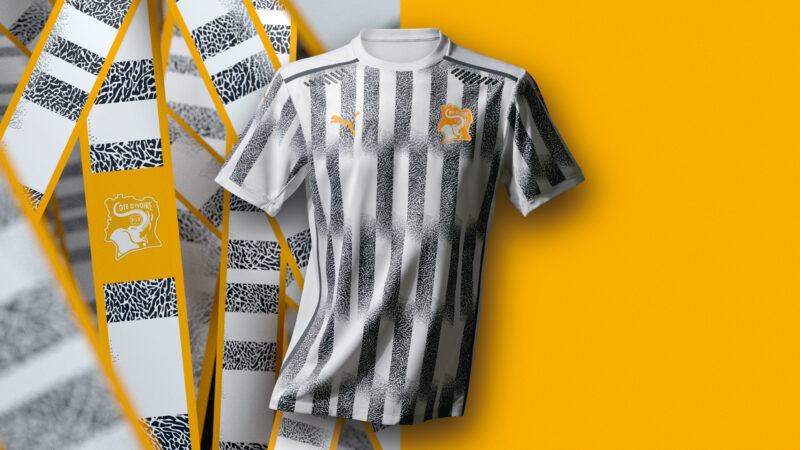 This is certainly an unpopular opinion, as Ivory Coast’s away kit has received a mixed response. However, PUMA brought quite an interesting approach to this away release.

Much like the AFCON 2019 drop, it adopts a white canvas, but this time around, there is a grey striped frontal pattern that is inspired by elephant tusks as a nod to the national team’s nickname, Les Éléphants.

The orange PUMA logo matches the federation badge which should look all types of wrong but somehow, fits in brilliantly. In fact, it adds a brighter element to the duo-chrome design and more importantly, reps the orange color seen on the Ivorian flag.

There are a couple of reasons why this isn’t higher up on the list, however. Firstly, it would’ve been nice to see an element of green incorporated in the trims or some part of the shirt to showcase that particular color seen on the flag.

Additionally, this kit had some big shoes to fill, as the previous away kit from AFCON 2019 was a solid offering. While good, the 2021 version just misses the mark set by its predecessor. Lastly, there have been too many terrific releases for this shirt to be right up there. 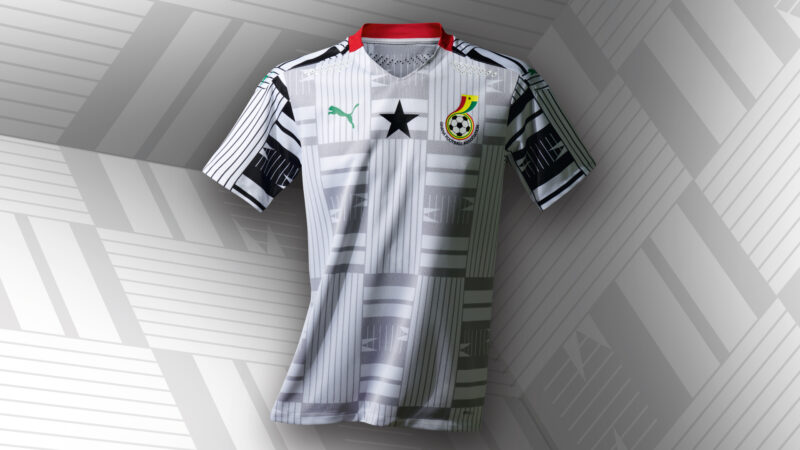 The Ghanaian home kit is a solid, if not spectacular release for the four-time AFCON champions.

It’s a class act from most kit designers to add an element of the country’s tradition in the design, and PUMA has done just that for the Black Stars. The patterns that you see on this strip are a tribute to traditional Ghanaian tapestry, craftsmanship, and design.

That is African culture as its finest and the fact that it’s getting its shine is a beautiful thing to witness. The way the sleeves have been designed, with the patterns all over them as well is quite unique and makes for a distinct design choice.

The green PUMA logo and red neck trim are just enough to represent the Ghanian flag’s colors, and while we don’t get yellow on any of the elements, the federation’s crest provides a touch to satisfy. All in all, this kit isn’t a bona fide slapper, but you’ve got to respect the artistry behind it. 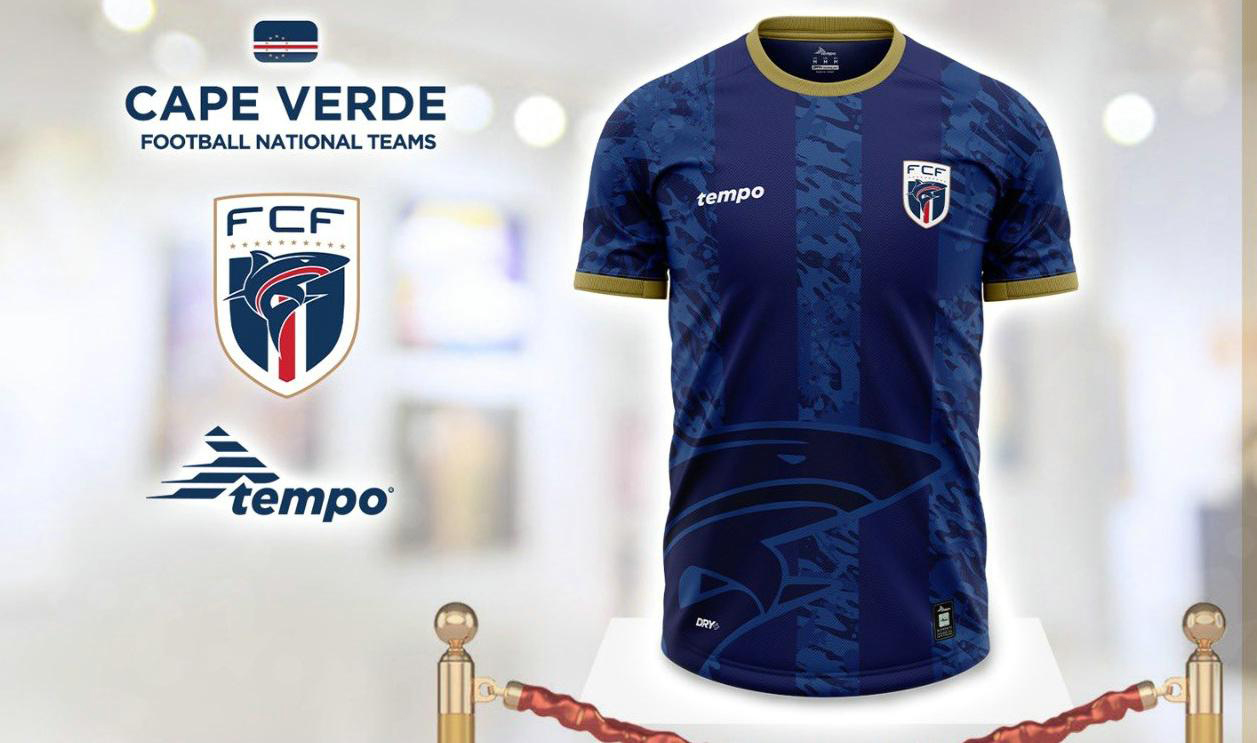 This is a clean offering from a different brand in Tempo, who became Cape Verde’s supplier just in time for the tournament. Most prominent in the design is the shark used in Cape Verde’s crest across the front of the jersey, as well as an oceanic theme that serves as a nod to the island nation. The gold accents finish off what is a solid debut from Tempo. 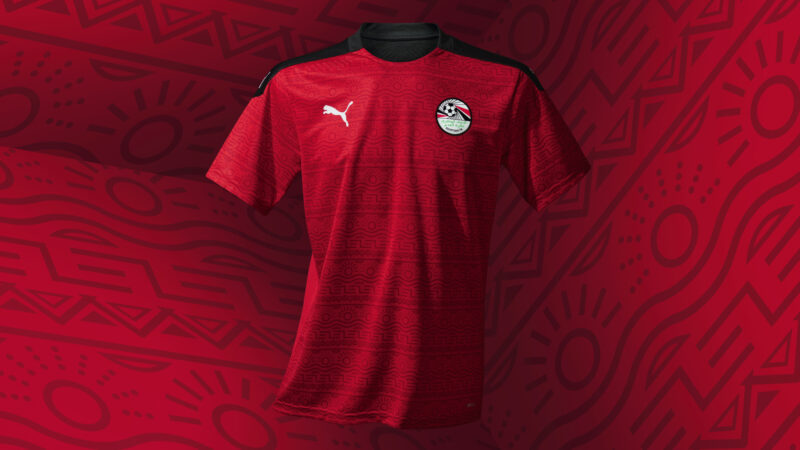 The most successful team in AFCON history is rocking a kit that is so authentically Egyptian that you just love to see it. The Pharaoh-inspired strip is a classy ode to the country’s rich history and tradition.

While the all-red kit may seem slightly basic at first glance, there’s so much more than meets the eye here.

The watermark pattern takes inspiration from Egyptian hieroglyphs, adding subtle details that aren’t overbearing. The black collar and sleeves combined with the white PUMA logo use every color in the country’s flag in a simplistic, yet tasteful fashion.

It is worth mentioning that while this release is certainly a major upgrade on the AFCON 2019 kit, you would want PUMA and Egypt to take more risks next time around. That’s possibly the primary factor that doesn’t quite put this release amongst the crème de la crème.

But we’re looking forward to watching Mohamed Salah rip defenses to shreds, after what’s been a shoddy start to the tournament. 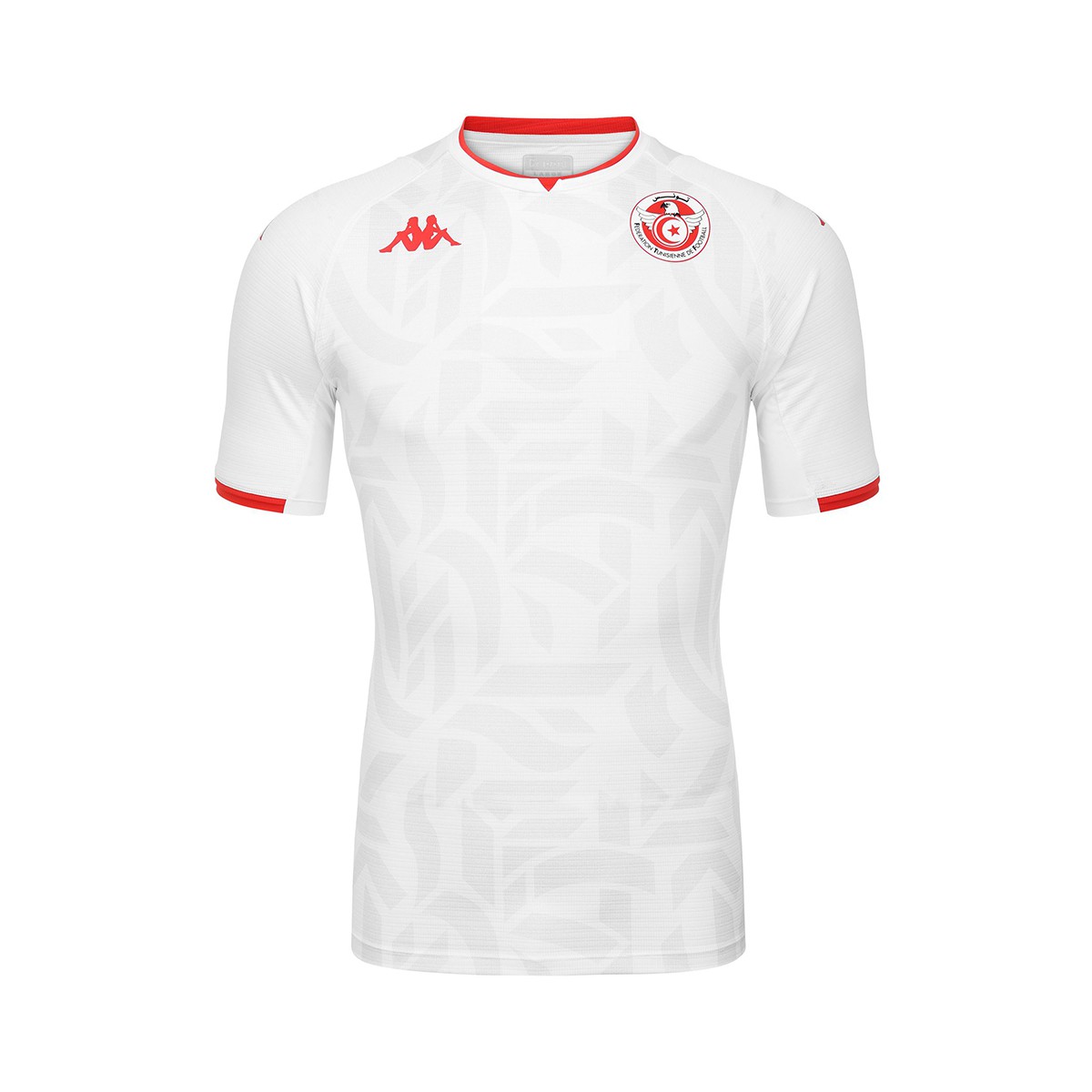 The Tunisia away kit is the most minimalistic selection in the entire list as Kappa has understood the assignment once again.

The pattern on the kit is a glorious nod to Arabic calligraphy, adding so much history and tradition to what could be perceived as a plain white top. The collar choice is on point as well and the red accents really leave an impression.

And last but certainly not least, that red Kappa logo slaps, doesn’t it? Takes you back to the 1997-98 Red Star Belgrade kit, a certified classic. Hannibal Mejbri is going to be extra saucy on the pitch when he pulls up in this tidy drop. 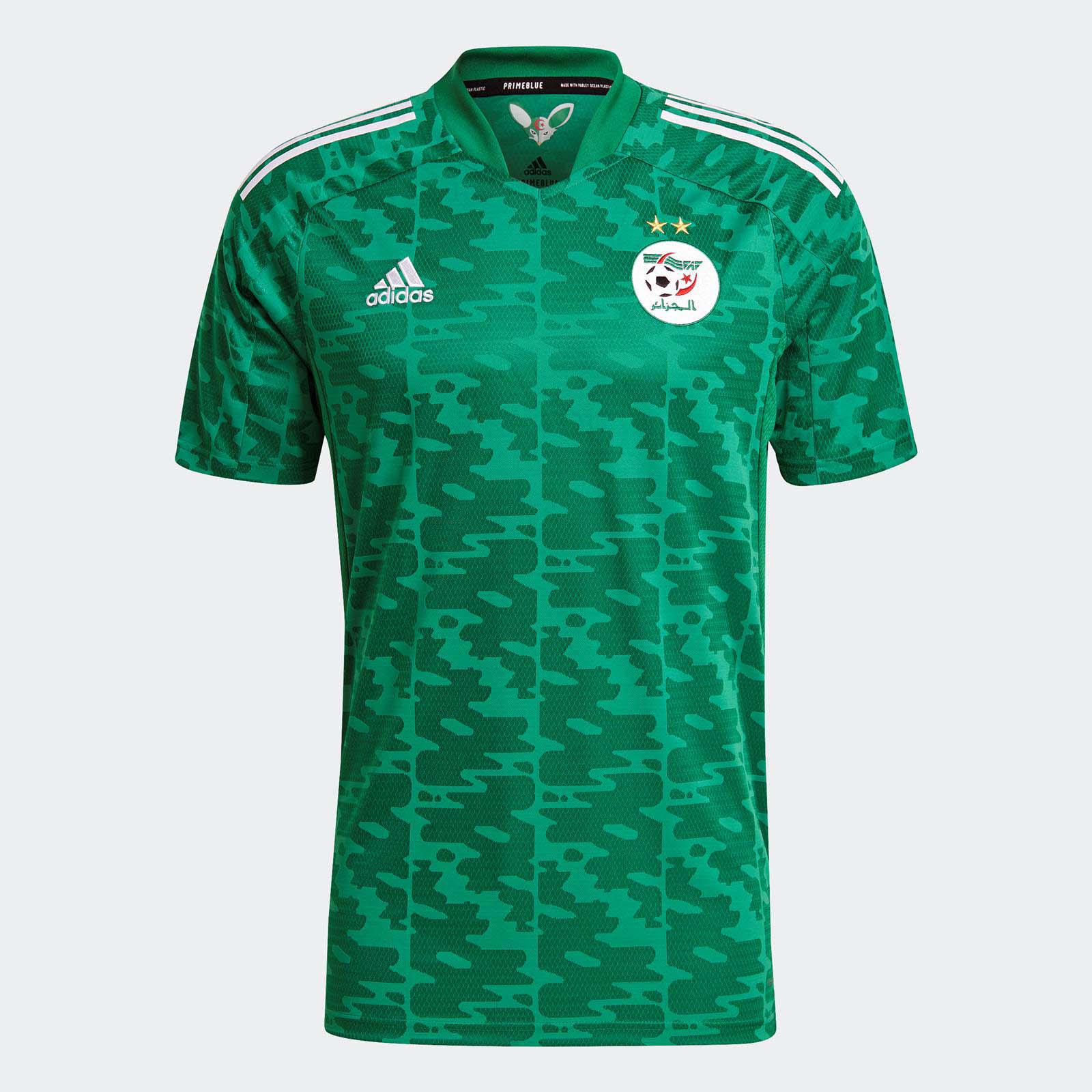 A kit as clean as Riyad Mahrez’s first touch, adidas knew what it was doing with this drop. Going for a fresher shade of green in contrast to Algeria’s 2019 AFCON-winning away strip, this shirt isn’t trying to make an impression, but somehow, it still has you adding it to the cart.

And much like almost every kit in this list, it does an excellent job of representing the country’s colors. While the all-green strip is a nod to one of the colors on the country’s flag, the white element is used to showcase the adidas ‘mountain logo’ as well as the three stripes, making the kit pop.

The patterns all over the shirt are also a nice touch, knowing how understated this drop is for an away kit.

The V-neck is deep, but just right because if it was cut any lower, you’re really not dressed for the part. And as a bonus, the kit uses Primeblue, ‘a high-performance recycled material made in part with Parley Ocean Plastic,’ as per the description on the official website.

Brownie points for trying to make the world a better place.

If there’s one criticism, it is that adidas hasn’t been able to top the away kit from the 2019 edition of the tournament.

Umbro has cooked up a super-fun design and that’s really what it’s all about with away kits, which tend to have a bit more aesthetic free reign than home ones.

The yellow kit pays ode to one of the Ethiopian flag’s colors, much like the home kit is red and the third kit is green. The tonal pattern on the shirt makes this release align with the summer vibes in Cameroon. The Umbro logo being in black is an obvious, yet delightful touch.

And the trims feature all three of the Ethiopian flag’s colors, a rare feature in this list so far, as most of the jerseys have one dominant color and one accent. The vibrant federation badge also adds to just how summer-ready and fun this kit is.

The V-neck contributes to the aforementioned theme and does not manage to look tacky whatsoever. In fact, it almost adds an old-school vibe to a very unique approach to an international away kit. Umbro smashed it out of the park with this release. 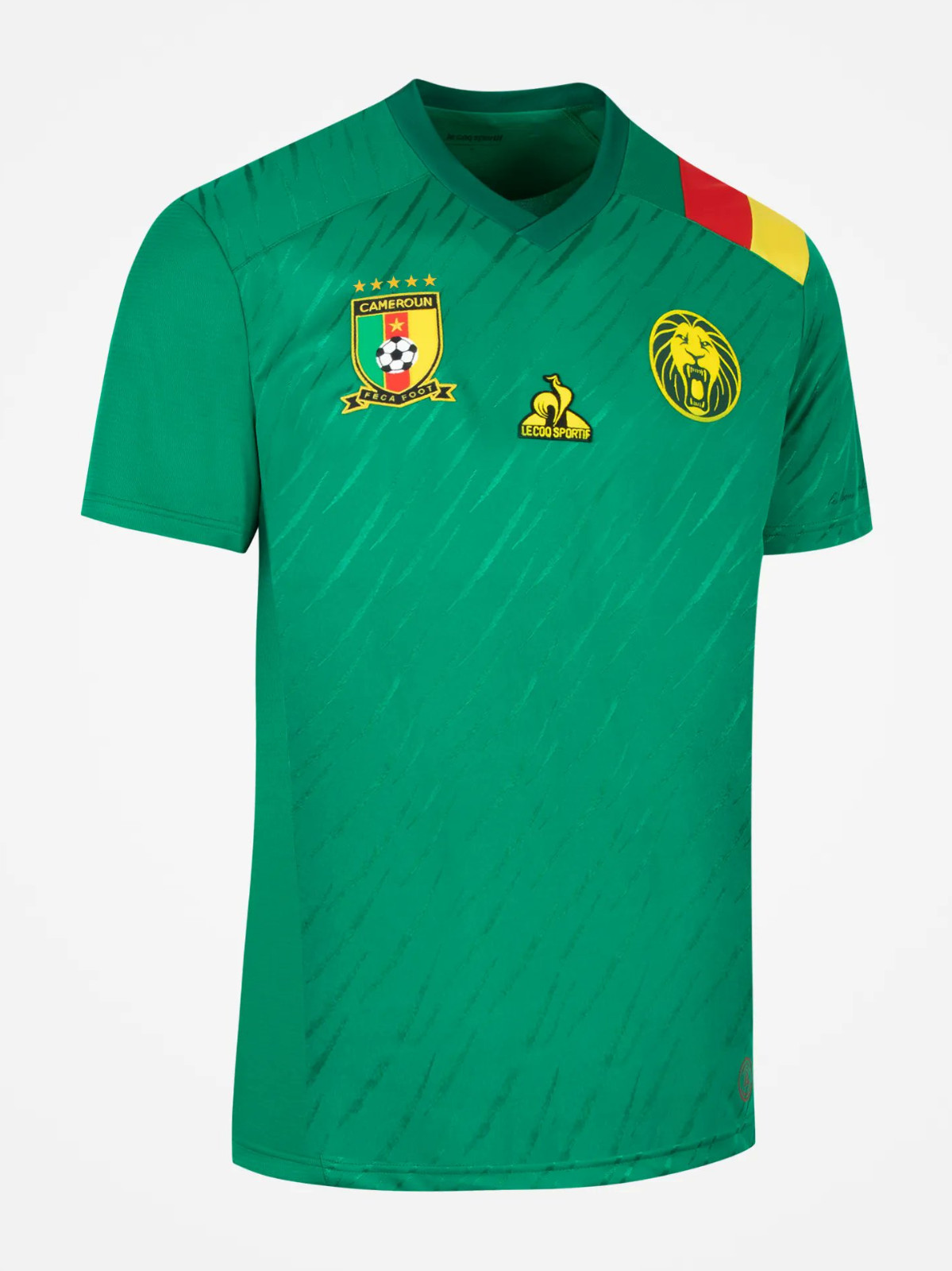 The Cameroonians possibly have the most iconic kit in AFCON history with their legendary release in 2002. Two decades later, the hosts of the ongoing tournament haven’t missed once again. Straight off the bat, the flag element on the left shoulder is a tremendous piece of detail.

Official kit suppliers Le Coq Sportif pay homage to the Cameroonian flag, with the green already dominating the strip in sublime fashion. Make no mistake about it, this is a design template that you’ll see international kits incorporating for years to come.

For a country that has arguably the produced the greatest African player of all time in Samuel Eto’o, it is key for the world to associate the Cameroonian colors with a rich history in culture and football.

The lion claw pattern all over the shirt is a throwback to the legendary 2004 AFCON drop, but just a much subtler iteration 18 years later.

The left sleeve features the message, Les Lions Indomptables (The Indomitable Lions), the national team’s official nickname — a minor, yet significant detail that should not go under the radar, showcased through a symbol on the shirt as well.

Cameroon’s lionhearted demeanor was certainly on display against Cape Verde as they roared back from behind to win 2-1, rocking one of the meanest home kits going.

At this point, we just have to accept that Kappa is going to drop classics even when our grandkids have grandkids.

There is not a kit at AFCON 2021 that gives a nod to its country’s national colors like Gabon’s third kit. Subtlety is not this strip’s strong suit and sometimes, less isn’t more when you’re repping the stunning Gabonese colors like this.

The yellow zig-zag pattern makes this number really catch the eye and is almost a disruptive element, making sure that there’s nothing predictable about this design. Kappa utilizes the blue in the same way as well, while leaving the green plain which adds a tinge of simplicity to an unapologetic release. Both sleeves feature a classy yellow and blue trim, which is yet another brilliant addition to a strip which you’d fail to hate on even if you tried. 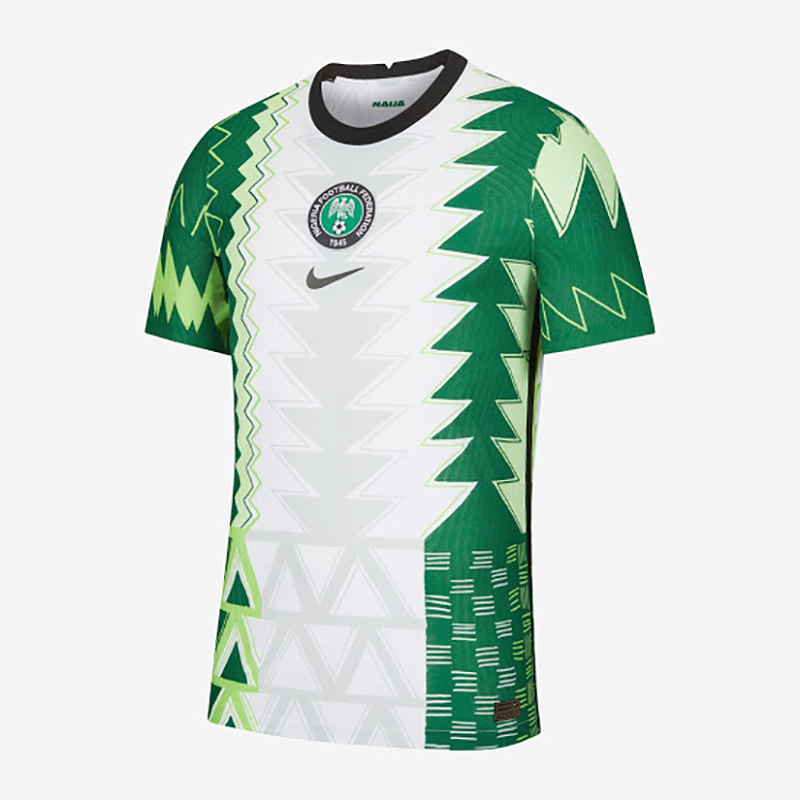 Could there be any other?

Nigeria has made a habit of dropping classic kits, even well before the instant classic that was their 2018 home shirt, which some were quick to call the greatest of all time. GOAT shouts for the current shirt, unveiled in 2020, may be a bit overboard, but you can’t understate how unreal the latest Nigeria home kit is.

The Agbada rope-inspired number pays tribute to Nigerian heritage in such a unique fashion, which makes their association with Nike so legendary.

The patterns across this kit were hand-drawn as well, which is no surprise in a sense because this really is a work of art.

Much like the England shirt that was worn during EURO 2020, the federation badge as well as the Swoosh are featured in the middle — a common design element back in the day that is slowly making a return.

“Naija” is printed on the inside neck as well as the back of the socks, which is an essential touch.

Every kit on this list is a banger, but what separates this one from the rest is how it ties in African aesthetics and football culture in a multitude of ways. Nigeria and Nike are clear at the top once again. 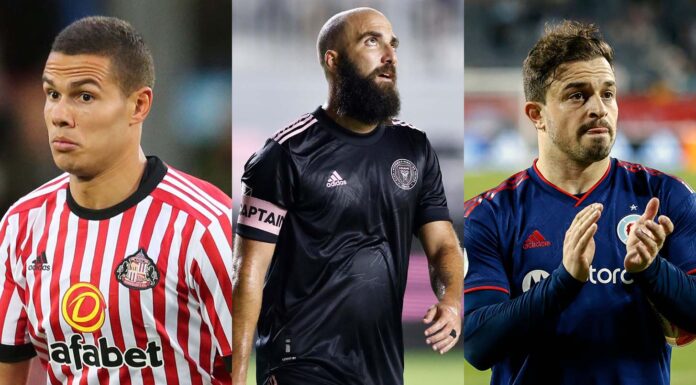