While today’s boot scene celebrates high-tech materials, fancy lab testing, and flashy colorways, there’s something about the classic leather boot that continues to capture our infatuation. We examine some of the all-time classics and the greats who sported them on the pitch.

A gladiator raises his sword to the sky, triumphant in battle at the Colosseum. The crowd cheers, the emperor applauds, and the lions underneath let out a roar. The day’s champion is sporting none other than the strapped leather sandals that powered Roman legions to conquer distant armies.

Our history in football originates with a similar story, with leather having supported most of us, from professionals to weekend warriors. There would be no football without the leather boot, and while many of today’s fancy footwear employ various synthetics and plastics, there’s a timeless and nostalgic air around the classic design of the OGs. In honor of that, we take a look at some iconic player-boot combinations, modern innovations in the leather world, and what they mean for the future of the boot. 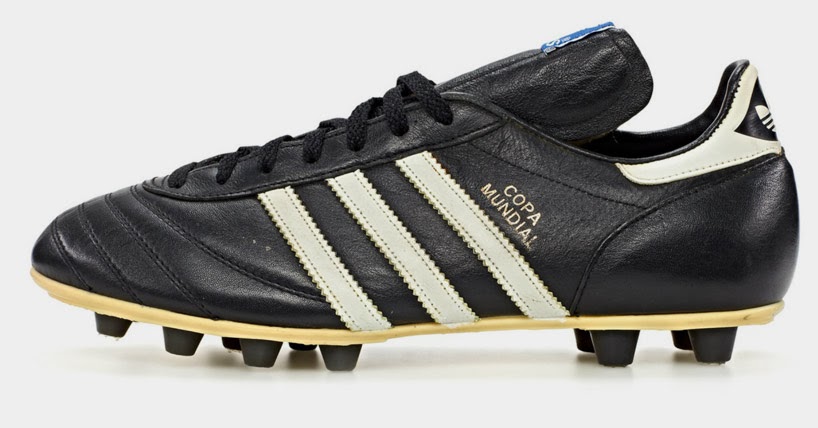 Released in 1979, the adidas Copa Mundial was designed for its namesake, the 1982 World Cup in Spain. Since then, it became the boot of choice for Zinedine Zidane, Eric Cantona, and Franz Beckenbauer just to name a few. Over time, certain images have become synonymous with the Copa, like Beckenbauer ripping a shot from distance in black and white (film as well as boot). Only in the past decade has the Copa seen modifications in order to keep consumers’ attention, with different color schemes, tongue adjustments, and structural modifications. However, the Three Stripes continues to produce a more or less unadulterated version of the ’79 originals, a testament to their perpetual beauty. 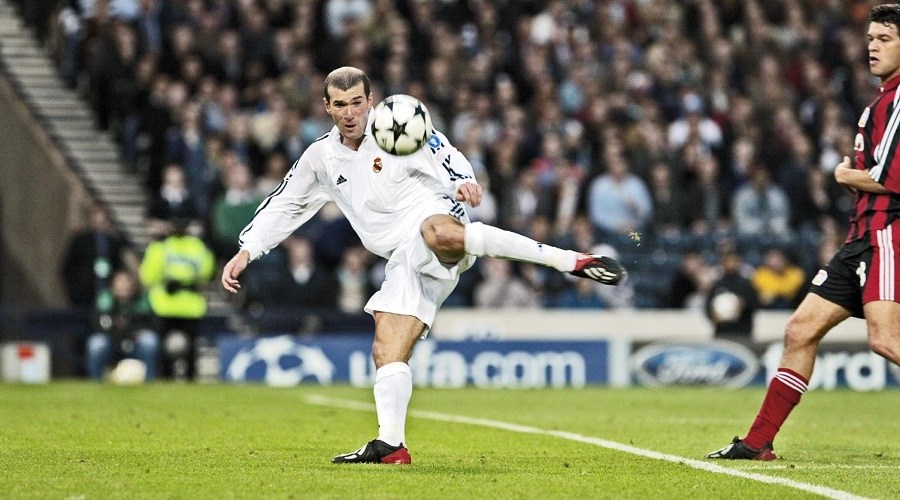 adidas went on to make boots with more “technological” designs, highlighted of course by the iconic Predator line. Zizou made the shift as well, famously rocking the Accelerators in the 1998 World Cup — the image of him lifting the trophy with the cockerel emblem on his chest goes hand in hand with the boots themselves.

Could it have been the futuristic asymmetrical lacing system that helped him become France’s talisman of the tournament? Either way, he and other legends like David Beckham can thank the early Predator’s primarily leather construction for giving them a soft touch to cradle their feet. 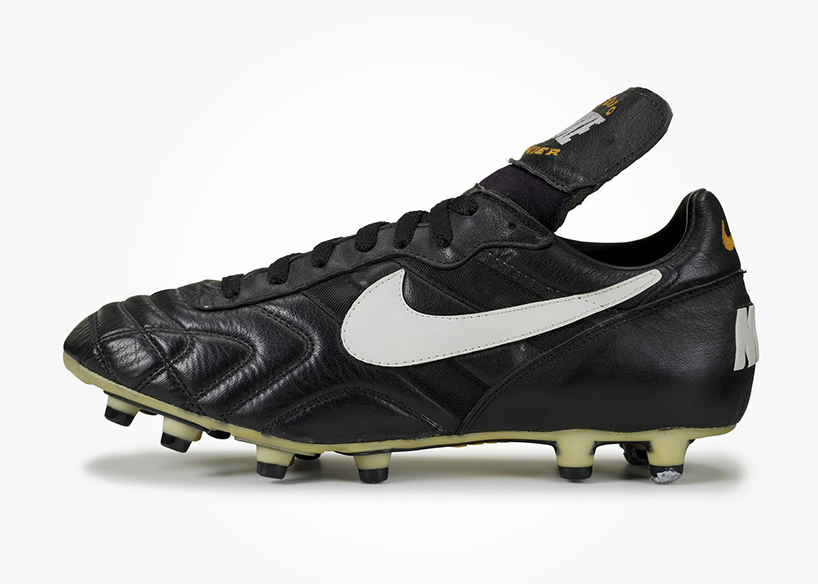 While the Tiempo has roots back to the mid-’90s, the boot is mostly synonymous with one player — Ronaldinho. Just after Zidane’s reign, the Brazilian magician was making waves in France with his slaloming runs and dazzling play.

Dinho would make the move to Barcelona from PSG in 2003, armed with his own boot in the form of the aptly named Tiempo Legend. He’d go on to win the Champions League in 2005-06 just after receiving the Ballon d’Or award, and he’d also claim La Liga to become the top assist provider in both competitions.

It seems like just yesterday he donned those golden Nike Air Legend R10s, “breaking the Internet.” The crossbar volley insanity would become YouTube’s first video to achieve 1 million views. The myth lives on today in the TiempoX 10R line with a signature quilted leather upper. 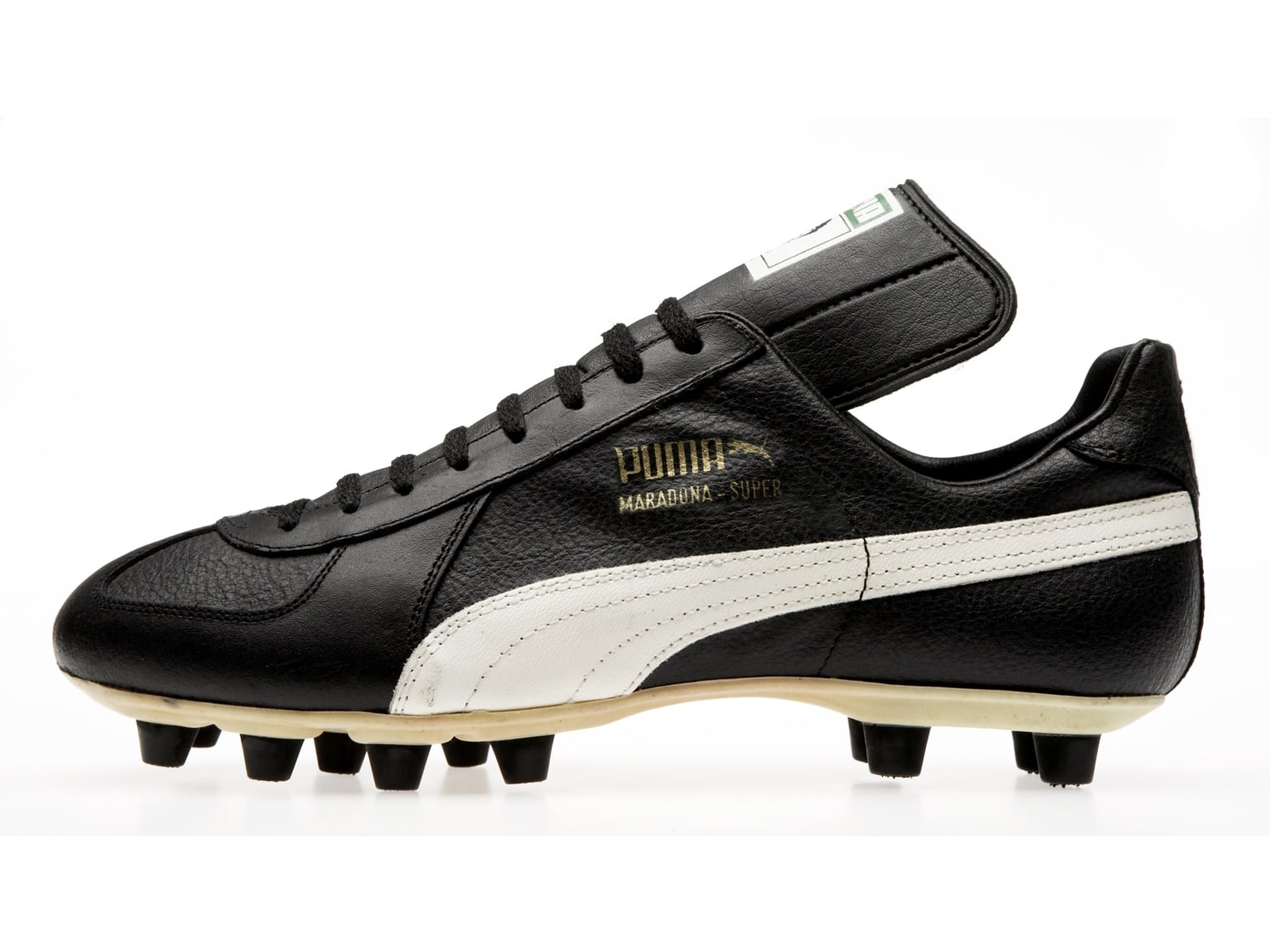 They say if you shoot at the king, you best not miss, and the PUMA Kings were worn by none other than the emperor of the 1980s himself, Diego Maradona. In an age where tackles from the back and elbows to the face were just another part of the game, the 5-foot-5 deity was simply out of this world. 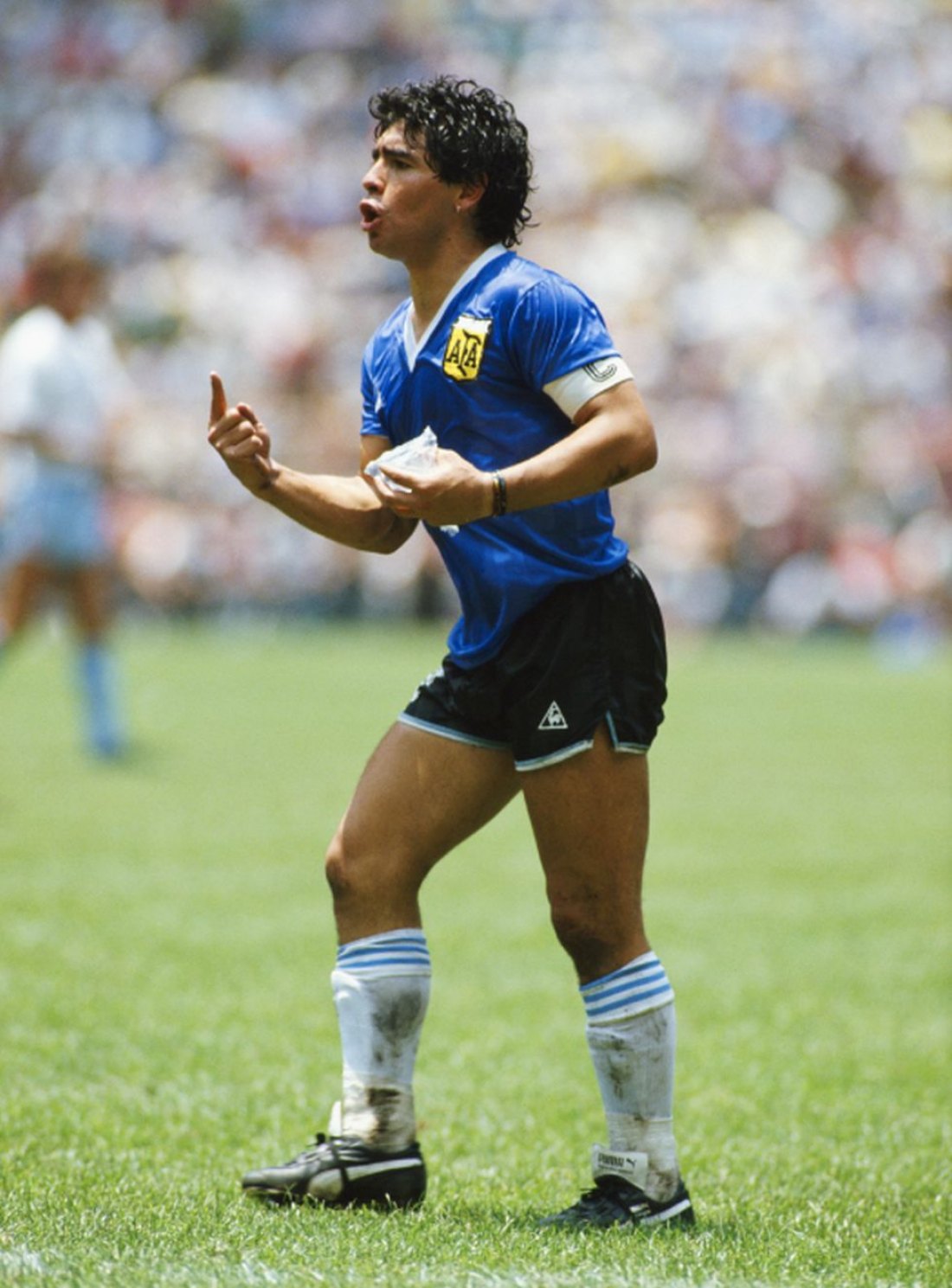 When he arrived at Napoli from Barcelona in 1984, he came as a saving grace to a club that had long been inferior to its northern rivals. His inauguration was met by 75,000 fans as he descended in a helicopter into the San Paolo. Winning the city its first championship, he came with supernatural play previously unseen by the naked eye. Borderline unattainable, Maradona danced through the Italian heavyweights in these boots. On an evening stroll through Spaccanapoli, you might just find him as a piece to a nativity set, or as a bobblehead, with his Kings at the bottom. 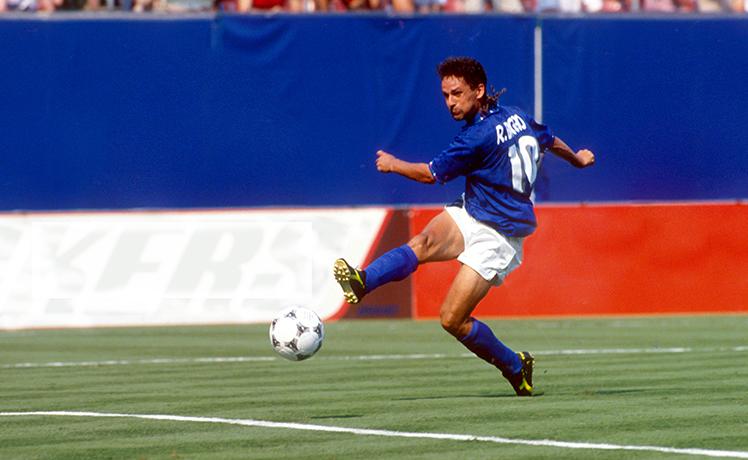 Speaking of kings, Roberto Baggio ruled the entire peninsula following Maradona’s wake. When it comes to craftsmanship, the Germans fall wayside to the Italians. With purebred leather manufacturing a staple to the country, Baggio chose the domestic brand for success over German giants adidas and PUMA.

The staple in his arsenal was the Brasil Italy K-Pro model from Diadora. With a kangaroo upper and outsole, Baggio burst past Serie A defenses in previously unseen fashion by a No. 10. Paying tribute to the boot’s storied history, Diadora has re-released the K-Pro in an elegant black and white contrast. With a “Made in Italy” version as well as a standard kangaroo leather one, there are two options for the cleat connoisseur.

While Diadora seemed to have taken the last decade off in terms of boot development, this testimonial to their supreme craftsmanship is a statement to their re-entry. Built on a small and highly skilled production line at the company’s headquarters in Caerano di San Marco, the stitching runs through the material like the natural elements combining to make the essence of life. With the Italian flag on the right of each heel, one can feel the history behind the boot, as well as the motivation for class and elegance to retake the game. 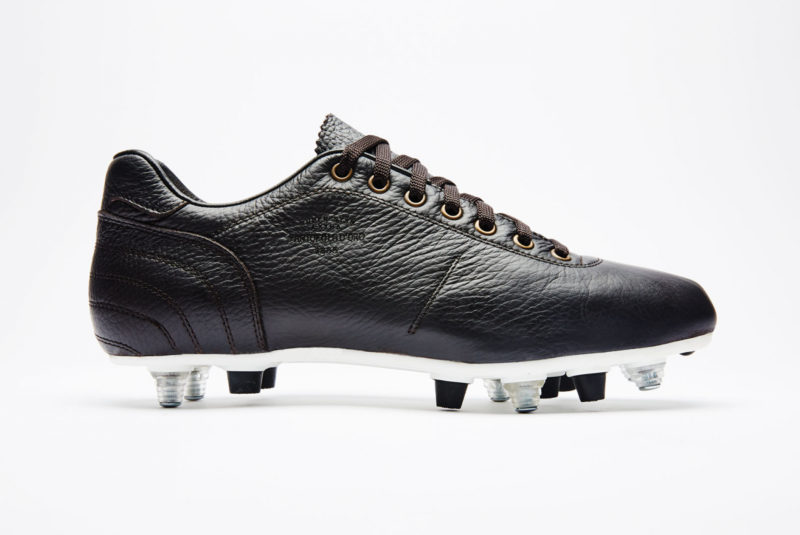 Southeast of Diadora’s laboratory, the workshop of Pantofola D’Oro has been making boots since the 1950s. When young cobbler and wrestler Emidio Lazzarini had used his family’s shop to tweak his athletic shoes, he knew he was onto something special. Using soft calfskin as opposed to the harder industrial leather, he gave his friend a pair, who was a football player. After this revolutionary concept and craftsmanship, he became the talk of the town, and was asked to make a pair for every player in Ascoli.

Since then, Pantofola d’Oro has made the most beautifully simplistic and supple boots in the game. The brand caught international attention for their product in the 1970s while on the feet of legend Johan Cruyff, who won the European Cup three years in a row with Ajax, while also heavily used by the 1984 World Cup champion Italian national team.

Their latest developments, the Superleggera and Lazzarini models, are where simplicity meets the quality of perfection. Still handcrafted, still made in Italy, and still supple calfskin leather. They may not be for everyone, but if you’re reading this article, you understand —  there’s no comparison to supple leather on your feet.

In an era plagued by spontaneousness and bright colored plastic “boots,” the streets won’t forget the classic heroes of the leather boot, and look forward to the next generation of high quality craftsmanship and originality. 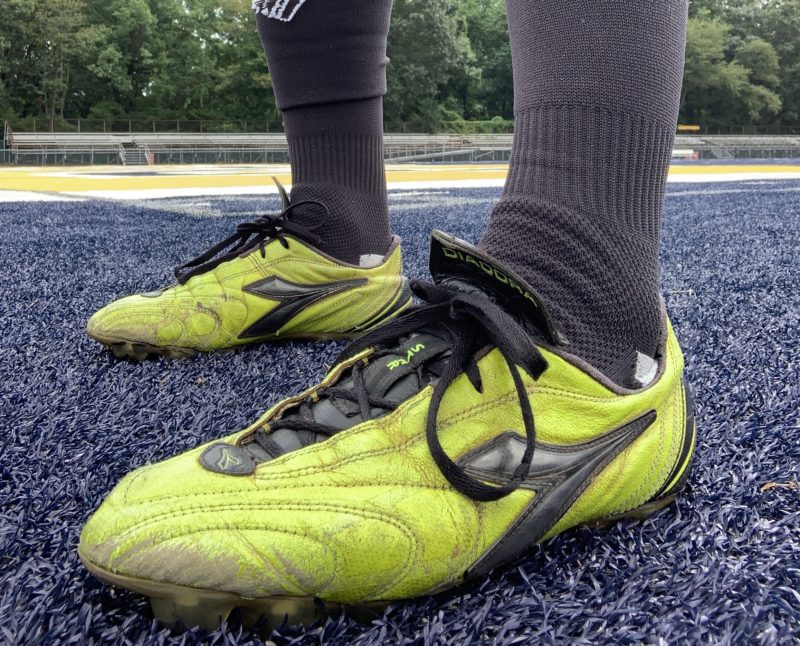 When I made the varsity team in my sophomore year of high school, my mom gifted me the most beautiful boots I could imagine. Before colors were a thing, Diadora sported the electric green kangaroo leather on the RTX 12, and man, I just thought they were the coolest things ever. Fourteen years later I still have them, as well as one white RTX 12 she got me a year later.

Without ever having used a leather care kit on them, they’re still soft as anything. I won’t play with them because I’m afraid they’ll rip, but I think one day when I achieve my goal of having a sports den, I’ll have a special place for them. They’re not just boots — they’re the feeling you had in every goal you scored. The backheel pass that went through. The long-range curler that met your best friend’s head for a goal. The walks off the pitch past that special girl you had your eye on practicing on the other side. And when you look back on the ups and downs of your playing days, and realize it was all worth it. 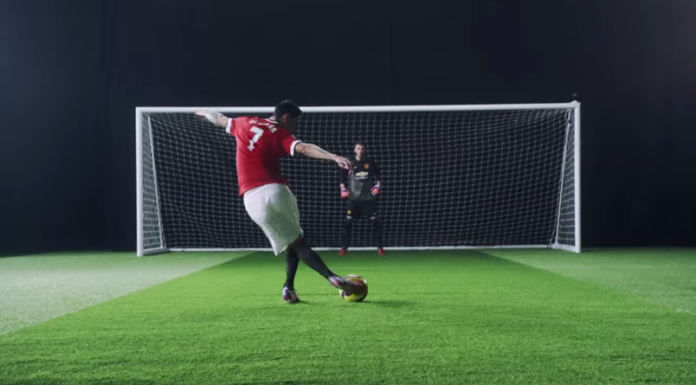